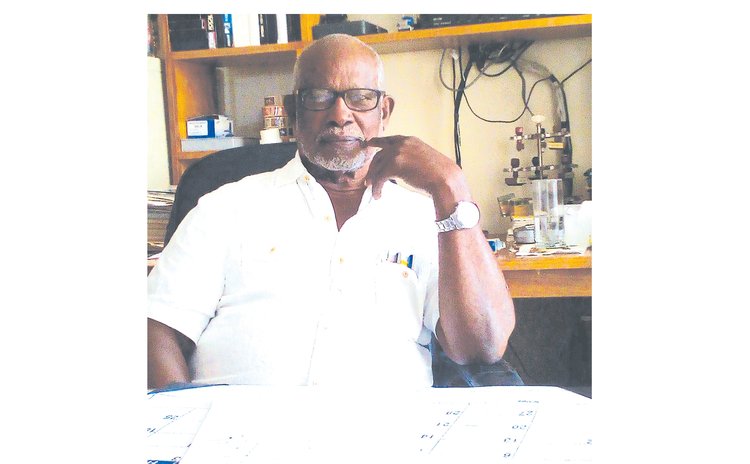 EH Charles in his office

The road of life has not always been easy for Egbert Charles.

He knew deep grief at the age of 12 when he and his two siblings lost their mom.

It was a defining incident. Getting over such sorrow at an early age strengthened his resolve and equipped him to face and conquer countless other challenges.

To do so, he trained himself to be disciplined, resilient and patient, qualities that served him well as he successfully navigated the bumps along the path to success.

oday, the sprawling, spotless compound that encloses his multifaceted business is testimony to his underlying traits of determination, diligence and responsibility. He has indeed achieved more than material wealth.

Neatly arranged awards glinting on shelves along his office wall are proof of the great admiration and respect persons in Dominica and various parts of the world have for this man's contributions to business and society.

For Charles, reaching these heights has been a remarkable journey from a humble beginning in Cornwall Street, Newtown, where he was born on May 1, 1936.

After his mom's death, family members took young Egbert and his siblings into their care, which resulted in him spending a few years with relatives in St Kitts.

On his return, Charles attended the Roseau Boys School and even as he pursued basic numeracy and literacy skills there, he simultaneously developed a passion for joinery and carpentry work.

Back then, parents ensured that their children learnt a trade from an early age and Charles relatives were no exception. Charles would go to nearby workshops to develop his carpentry and joinery competencies.

Although he loved construction, Charles knew that his career choice wouldn't be based entirely on what he wanted.

"In those days, you had to go to school and after school your parents would decide for you what you ought to do...You had to give an account of yourself both in the classroom and otherwise," he said.

After he had completed Roseau Boys School, Charles went on to work with the Ministry of Public Works.

It was a timely move because a few years later, the United States Government was offering scholarships to nationals throughout the Caribbean.

Through the Government of Dominica, Charles applied for and secured a scholarship award to pursue construction studies in Puerto Rico. The duration of his programme was two and a half years.

It was an eye-opening experience for the teenager. Not only did he get to study what he loved, but he was also able to meet with many other Caribbean students at the same college.

Charles returned from Puerto Rico at the age of 20, brimming with new knowledge and eager to put into practice what he had learnt.

He returned to the Ministry of Public Works and it wasn't long before he was sent into the field to supervise major projects.

Young Charles was assigned to oversee the building of a post office and health centre at Vielle Case, a primary school in Paix Bouche and to assist a senior contractor to build the Goodwill Junior High School.

After the school project, Charles decided to go into business on his own and established EH Charles & Sons in 1967 in the basement of his Fortune home.

It was a challenging time. The economy was sluggish and money was not flowing in a way that would assure a continuous stream of business.

Furthermore, as a relative newcomer in construction, Charles had to prove himself.

"It wasn't very easy...the people who employed you had to know about you… about your ability... And most important, you had to be trustworthy..."

"There was limited clientele or activity on the island... that would limit your scope as well," he explained.

Charles added, "The people had to come to depend on and accept you for who you are before they put their money in your hand."

Realising his success depended on creating a solid reputation as a contractor, Charles committed himself to doing the hard work necessary to enhance customer confidence and support.

And, after much toil and long work days that sometimes lasted 18 hours, he achieved the reputation he was looking for as a contractor who did excellent work at a fair price, who was reliable and who took deadlines seriously.

Soon he was contracted to do larger and more important projects, such as the National Bank of Dominica and Dominica Social Security building, refurbished sections of the Princess Margaret Hospital and the first phase of the H.H.V Whitchurch building. His largest project was the Castle Bruce Secondary School.

Charles continued to do business from his home until he bought a piece of land at Goodwill and shifted his operations there.

Later, it became clear to him that he would have to expand to hardware and building supplies.

In time, he started merchandising exclusively. Hs involvement in construction is limited today to giving free advice to those who request it. Some clients for whom he built homes still consult him before making adjustments to their properties.

Charles, a father of 12, said: "I always knew in order that you survive and you help your loved ones survive, you have to be honest and work hard to meet the multiple challenges of life."

His policy is to steer clear of politics, but he always tries to lend a helping hand to individuals, charities and groups in need.

"That is always my weakness...always wanting to help somebody," he remarked.

Charles' hard work and commitment to quality have been recognised both locally and globally.

Locally, he was bestowed with the Sisserou Award of Honour. Overseas awards include: 10th International Golden Construction Award 1998 (Spain); Golden Award for Commercial Prestige, 1997 (Spain); EMRC Euromarket Award, 1998 for his contribution to the development of International Trade and Commerce in the EU (Brussels); the American Medal of Honour from the American Biographic Institute in 2008; ESQR Quality Choice Prize (Berlin) in 2016; the 10th Golden America Award for Quality in 1998 (USA); and the 11th International Award for Quality, 1999 (Puerto Rico).

Charles continues to play a hands-on role in his business, reporting for work daily to manage the affairs of the company he worked so hard to build.

When Charles is not working, he enjoys swimming and playing dominoes. He also still enjoys operating the forklift!

"Throughout you career you have built great concrete works with excellence and the Company has during these years persistently supplied the construction industry with reliable building materials of the highest quality". Julian Johnson to Egbert Charles