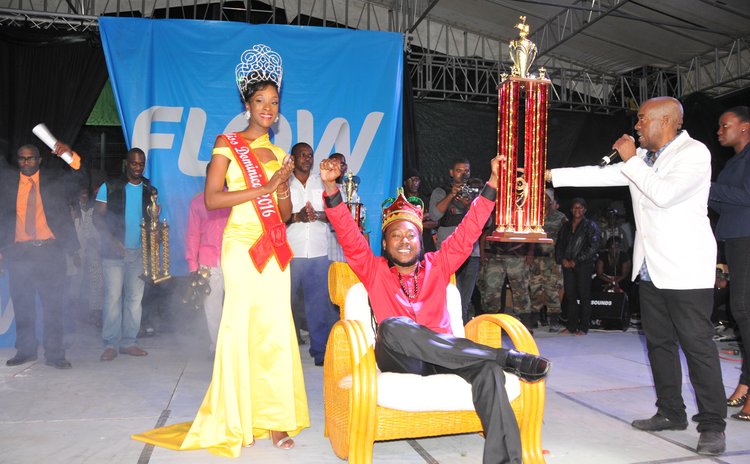 Dice celebrates after he was crowned by Tasia Floissac, Miss Dominica 2016

Here is Dice at the top of Calypso Mountain and there's the other calypsonians in the valley, at his feet.

No one comes close. He's Unbelievable. Unprecedented. Out-of-this-world. Whether you love him or hate him, you will concede that Dice is the King of Calypso in Dominica.

In the first of the two-round competition, Observer (Davidson Victor) was the first performer and he set the bar high with a superb rendition and articulation of a song he called "Red Rain", a critique of the performance of the current government. Observer left the stage drenched but he did not even place in the top four.

Sye (Murphy Jules) who followed Observer with "Good Ole Days" and later in round two with his anti-gay "Feel up, feel up" suffered the same fate. Go ahead, sigh for Sye.

So too did Janae (Janae Jackson), the only female in this male-dominated art-form. Some observers, like DBS Commentator Catholic priest Eustace Thomas, thought the 18 year-old had the lift, after a great performance with the prayer-like "Gratitude" in round one, to crash- land the competition and then walk away with the monarchy. But Janae too did not make the top four.

Poor De Bobb. He tries so hard, gets so close, sings so well but the Calypso crown continues to elude him. Again, as he has done on so many occasions, Bobb placed third (Second Runner Up). He sang last in both rounds of the five-hour Finals but in Calypso the last is not always first. Only in the bible.

Feel sorry too for De Web (Webster Marie) who is a "Survivor" (the title of his first song) because he returns every year with great songs, sings in a strong melodious voice, performs meticulously but eventually Dice or Karessah grabs the title. In 2016 almost everyone thought Webb had done enough especially with "De Tail Wagging de Dog" to win the Calypso crown for the first time. But again he didn't. It's almost like a web of deception.

What happened to Shadow Flow? Well, his lyrics didn't flow, it froze in round one when he appeared on stage on a small bicycle and sang "Brogodow". His performance was a mere shadow of what his many fans expected. However, Shadow Flow made up for lost ground in round two with a near-perfect performance of "Each one, teach all" but that was not enough and as Prosper warned fellow calypsonians: "One song kanna win crown."

In round two King Karessah made the wild prediction that he would retain his crown when he entitled his song "The king is back." Yes, Karessah was indeed back, but he placed at the back of the pack when the judges ruled at three o'clock on Sunday morning.