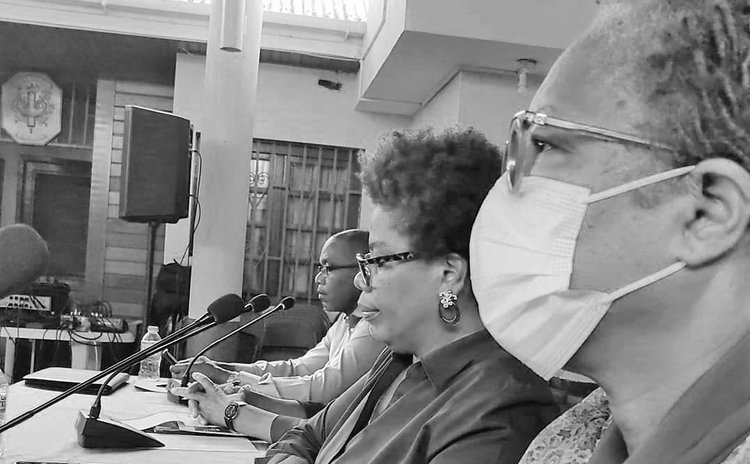 Since the emergence of the novel coronavirus a steady stream of new policy measures have been enacted to protect the public from this growing pandemic.

At the forefront of these efforts have been measures to limit interpersonal contact to prevent transmission of the virus as well as social distancing, school closures, and the shuttering of nonessential businesses. While it has been well-publicized that older adults are at the highest risk of serious illness and death from COVID-19, they are also at high risk for negative consequences from the very measures being enacted to protect them from the viral threat.

Before the COVID-19 pandemic, elder abuse was very prevalent here in Dominica, but now it has been assumed that the virus has brought with it a surge in this crime.

On June 18th, 2021, the Dominica Council on Ageing (DCOA) hosted a panel discussion to educate the public on this multifaceted problem that is eating away at the moral fabric of our society.

During her presentation, past president of the DCOA Zetma Toussaint highlighted that one of the most common abuses endured by the elderly here in Dominica is psychological and physical abuse.

As pointed out, at the heart of most psychological abuse is the humiliation by calling them names, such as "witches or soucouyant."

Acknowledging that the situation is at an all-time high, the former president emphasized that now "is the time for us to speak up and take some type of action plan."

For her part on financial abuse of the elderly, the Health Educator from the Health Promotion Unit Adora Toussaint, disclosed that the majority of people who commit these acts are family members.

Common examples of financial abuse include family members who repeatedly pressure a parent for money or borrows money but never repays it, a family member who sells a parent's house or other property and then uses the money for his/her benefit, adult children who use a parent's pension and then make the parent ask them for money, a person who misuses a power of attorney and a person who forces or tricks a senior into signing or changing a contract or will.

"Financial abuse is real out there, sometimes you see the big transfer from a parent account to a child's account with the parent not know this. The reason why these things occur is because of how we care for our elderly. We are afraid that our names won't appear on their wills so we take the property beforehand so we can have part of the cake," Toussaint lamented.

Also prevalent here in Dominica is sexual abuse of the elderly, which the social worker says may put them at risk for numerous health conditions.

As reported by the welfare officer from the Welfare Division, Mr. Oliver Wallis, weekly there are an estimated 2-5 applications for admission to the Dominica Infirmary; these are submitted to the Welfare which he deemed as a discouraging indication that our population is not prepared to care for the elderly.

"This is a sad aspect of our life, our population is aging a little faster than we would have liked but while it is aging, the population of our young adults is seemingly unprepared," he stated.

As to the next step, recently re-elected president of the DCOA Ophelia Olivaccè-Marie notes that a closer relationship with each of the panelists and building on their recommendations is among the new board's top priorities.

"We know we have to tighten that gap and work more intensely with them. We will also be looking at the training of the person involved to those giving care as well as to continue our awareness programmes", she said. "People have to know that all of this is happening and it has to stop."

A few years ago, the DCOA through its attorney following a review of the laws made several recommendations which the DCOA believed could help curb this ongoing problem and is now in the process of reviewing those recommendations and having them submitted to the necessary authority.