Emile Lancelot Sr.: "I prayed, prayed and prayed to my Dear Lord to save us" 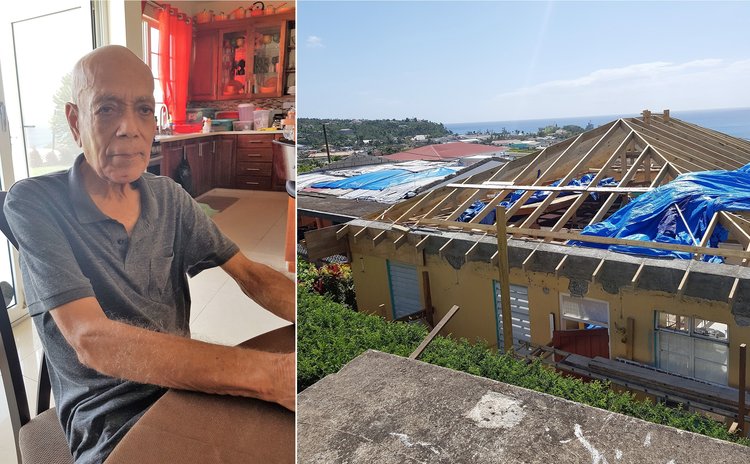 Never in the wildest dreams of veteran retired journalist Emile Lancelot Sr. had he imagined that Hurricane Maria would have left him homeless along with his wife and a mentally challenged son.

Lancelot, 83, resides on 10th Street, Canefield in a two story building with Hearle, 73, a retired school principal and their son.

Emile Lancelot Sr. said: "I must say that I fared out badly because I had to withstand the fury of the hurricane for hours at home under trying circumstances. My wife and son, who is mentally challenged, and I took it all and I considered us to be very lucky because we escaped with no injuries.

"Our roof came out in its entity; we lost every single thing in the house and we took it all for 7 ½ to 8 hours. I must say that it was a terrible experience in that we had to stand for the entire ordeal during the night since we didn't want to move about for fear of being hit by flying objects.

While recounting the evening of Hurricane Maria on 18 September 2017, Lancelot, a former editor of the Chronicle newspaper, said his family lost their roof at about 10pm that evening.

"During the night you could hear the whistling sounds of the wind as it went through. That was just a terrible, terrible experience that I will never ever want to experience again. I had a major surgery for cancer a few years ago so it was very difficult for me to withstand all that traumatic experience.

"I am 83 years old now and I experienced Hurricane David and had always told myself that we will not experience anything stronger than David. So, it was a big surprise to us to have to withstand Maria at that sort of pace and intensity. I don't think we will again experience something like a Maria again. Maria made David look like a joke.

"I prayed, prayed and prayed to my Dear Lord to save us from the fury and He answered my prayers. We had a big fridge and the wind and water made it look like a joke…it was a floating object. It saved us because it bared the kitchen door. We had four feet of water in the house.

"We thank God for keeping us safe during the night, we could have been dead. My son came to our rescue the next day and we had to walk to my son's home in Canefield East and it was again another terrible experience. We lost a lot of strength since we stayed up all night during the ordeal; so making that walk was difficult for us," Emile Lancelot Sr. said.

For Hearle Lancelot it was just as frightening. While Emile and Hearle will have to start all over again they are thankful to Government for assisting them.

"We started the night by sitting down and we ending the entire ordeal by standing up. We lost every, everything and thanks God for my children. My son was our rock and salvation after the Hurricane. Everything mashed up; we were penniless, on our son's account. He had to give us everything for the three of us. I know now what a penniless person is like. It's painful. Those who have children take care of them because I never knew I would have been totally dependent on my children. We have been there, at his home, since after Maria with him and it's not easy. He has to work and then supervise the work on our building.

"People helped us all the way. Our challenged boy didn't want to leave. He was terrified and when he came out and saw what happened he said he was not going anywhere. He dashed out but went straight into the arms of my son who took hold of him. "We have decided to change our roof because we don't want to go through that experience again. I don't think that we will be able to take another one like that if it comes our way; we will come out of it dead.

"Thank God we were insured, so we were able to get something from the insurance company but that was not enough since we had to rebuild our roof. We got help from the Government of Dominica who came to our rescue and for that we are very thankful and grateful.

"If we didn't know God during that hurricane, I don't think we will ever know again. God was at work. I forget documents and everything…we suffered a great loss. When Hurricane David came I was young but now at 73 I couldn't do much. Thank God for my in-laws who came and assisted us in cleaning."