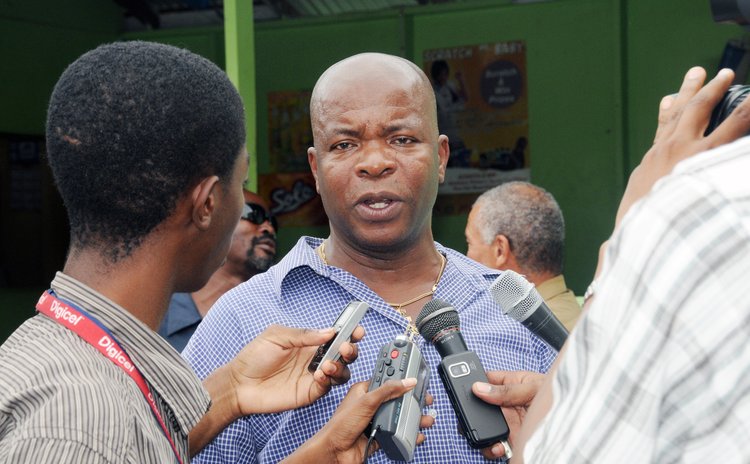 It was the storm that wreaked havoc in the country, taking lives, killing dreams and wiping out the island's entire budget. It suppressed ambitions and tempered expectations.

The Dominica Public Service Union, which is to begin negotiations with government for a new three-year collective agreement effective 1 July 2015 to 30 June 2018 has been forced to take a fresh look at its approach in the wake of Tropical Storm Erika .

The union was preparing to hold a general meeting with its membership to cement its approach to the negotiations when TS Erika unleashed its fury on Dominica, washing away so many plans.

"We were expecting to have a general meeting with our membership to discuss some of the recommendations we got from different sections within the public service. We met those who work in the ministry of health, ministry of finance and so on and so forth. [We met] different people at different times to discuss their specific needs," DPSU general secretary Thomas Letang told The Sun.

"With the passage of the storm we realized we have to relook at some of the things we [intended] to propose."

Letang did not disclose details of the proposal, but he said the union was scheduled to meet with its members on Thursday 24 September to take fresh guard.

"The damage that has been caused by the storm, we realise this will impact seriously on salary increases and non-salary issues. Therefore we have decided to meet with the members to decide whether we ask for a salary increase, if we ask for part increase or none. So it will really help us decide how to proceed," the union boss told The Sun.

Like the rest of Dominica, union members have been struggling to cope in the aftermath of the weather system. Many of them have either been impacted directly or know someone who has. The union itself was left in mourning even before the flood waters receded.

Help has come from sister trade unions and other sympathetic organizations, some of which have contributed relief supplies which will distributed soon. The DPSU has also assisted some members with cash contributions.

"But a number of our members have been affected," Letang said.

This notwithstanding, the DPSU has recognized that public officers "are really important" to the rebuilding process, Letang told The Sun. Therefore it has decided that civil servants ought to join volunteers who donate their time to help the country recover,

Therefore, the union has asked government to allow public workers one day off work on agreed intervals so they can remain in their communities to help rebuild. The details are yet to be worked out, but Letang said it was important to demonstrate the desire to return to normality.

"[We talk about] voluntourism. If people are coming to assist, we as a nation we have to show we are prepared to help ourselves," he argued.

Among those who Letang had hoped would have been engaged post-Erika are workers of the Public Works Corporation (PWC) who were laid off 10 weeks ago after they protested over a number of issues, including late payment of salaries, the non-payment of Social Security contributions and benefits and "hazardous" conditions under which they were made to work. There is no indication if or when they will be recalled.

A meeting was planned for August 31 to discuss the way forward but it was washed away by Erika's rains and Letang said the PWC chairman Titus Francis has ignored several attempts by the union since to meet on the issue.

"The Public Works story is really a sad one," Letang lamented.

The union boss has also written to Prime Minister Roosevelt Skerrit "in my capacity as general secretary of the Caribbean Public Services Association" expressing concern about the situation and reminding him of the workers' right to employment and to having their social security deductions paid.

"Very interesting, in the letter to the prime minister we said the Dominica Public Service Union is aware that the passage of Tropical Storm Erika presents opportunities for the Public Works Corporation to reemploy the workers."

However nothing has happened since and the workers have been finding it more and more difficult to make ends meet, Letang said.

"To me it's insensitive, inhumane and un-Christian to continue to do that to these gentlemen and ladies, who have children to take care of, who have elderly people to take care of . . . The stories are heartbreaking. A lady came to me to the office yesterday crying, crying, saying she doesn't know what to do. A gentleman came to me and said he had been working with public works for 20 years and there is nothing left on his bank account and he has debts to pay."

It is another issue that the union and its members will discuss at Thursday's meeting which begins at 3:00pm. Letang said the DPSU has received approval from government for the early start.

Note: The DPSU has decided to forgo salary increases and increases in allowances for one year