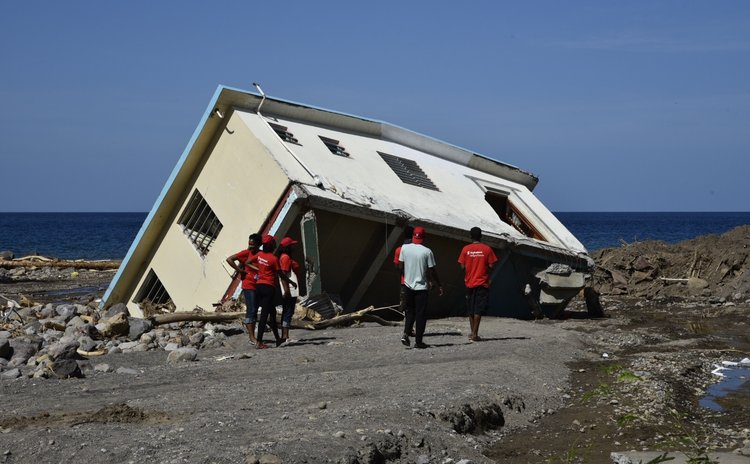 It was the most unwelcome guest to visit the country in nearly 40 years, and possibly the most unexpected and deceptive. And not only was the visit unanticipated, but Erika left behind death, destruction and a very big bill to clean up the mess and disruption that she caused.

Based on the initial estimates, the entire 2015/2016 budget of $563 million will not be enough to cover the cost of the damage. Prime Minister Roosevelt Skerrit has announced that an estimated $612.7 million will be needed to repair infrastructural damage caused, and a further $39.5 million to rebuild the Douglas-Charles airport. And this does not include Petite Savanne, where Tropical Storm Erika stole lives and livelihoods, wiping out the entire village in the process.

"If one adds up the projects that have been done over the last 15 [to 20] years you get roughly that figure," said Dominica's most noted historian Lennox Honychurch. "So in seven hours, 20 years just washed away."

It is money that will not be easy to come by and little will come via aid, several observers have told The Sun.

"On the international circuit we are just one disaster among many so it is a tremendous challenge because you are trying to compress 20 years of aid negotiation for different projects.. . . the long and short of it is that basically over the last 15 years, close to or over 600 million was spent on various projects and raised through long, drawn-out negotiations and now they have to go back to the same people to ask for money to do it again," Honychurch said. "China has her own problem now, Europe has its problem; countries will suffer from aid fatigue."

Skerrit has seemingly recognized the enormity of the task and has called on rich countries to help. In commenting on the contribution of the United Kingdom, whose Royal Fleet Auxillary Lyme Bay arrived here last week to assist in the western communities of Bioche, Colihaut, Coulibistrie and Dublanc, the prime minister stressed that he was "not passing around a begging bowl". However, he said the situation was dire and the country needs help.

"This country has suffered a major setback and it needs immediate help of friends and well-wishers. It's gonna take a lot of effort on the part of the country to restore the infrastructure," he said.

However, one overseas-based Dominican development expert with experience in international negotiations said Skerrit should not expect much by the way of grant aid.

He referred to the Christmas Eve 2013 flash floods which killed at least nine people and caused extensive damage in St Vincent. "They had to borrow [money]" said the person who spoke to The Sun on the usual condition of anonymity because he did not represent the government. "They'll have to take loans. They'll get some grant funding but I believe a lot of it is going to be loans.

"The most they can get from the World Bank [will be] soft loans which will give them 30 years to pay back. If you notice the amount they are getting is [are] small amounts. It will be a huge challenge to mobilize these resources," added the source, who told The Sun he was "quietly working at sensitizing" some countries to giving help.

The prime minister also seemed resigned to this reality, saying at one of his news conferences that the country would likely have to borrow to repair the damage.

"And therefore we have to contract loans, I'm hoping at highly concessionary rates. Looking at zero per cent interest loans with 20 year grace period and maybe a 40 or 50-year repayment on the principle," he noted.

For environmentalist Athie Martin, the issue goes beyond aid-hunting; it has to do with sensible planning that take the environment and the country's topography into consideration.

He doesn't expect Skerrit to raise anywhere near the over $650 million needed for reconstruction. In fact, Martin believes when the final tally is made, the cost of the damage will rival the country's debt of $1.3 billion.

"He's [Skerrit] left with going back to the gift giving . . . So he might get $100 million, but that will be far from enough. That cannot build the bridges and the roads," Martin told The Sun, suggesting the storm's impact could be a turning point for the country and should be seen as an opportunity.

"So we either turn or we slide all the way to the bottom. We have a serious problem, but also we have a significant opportunity . . . We can build roads, right, we can (introduce) zoning, we can say no building (in certain areas). I'm hoping we will not dwell on the disaster, but dwell on the opportunity, and that could give Dominica quite a lift. Quite a lift."