Are you ready for the 2014 World Creole Music Festival? Dominica's Festival Committee has announced its line up 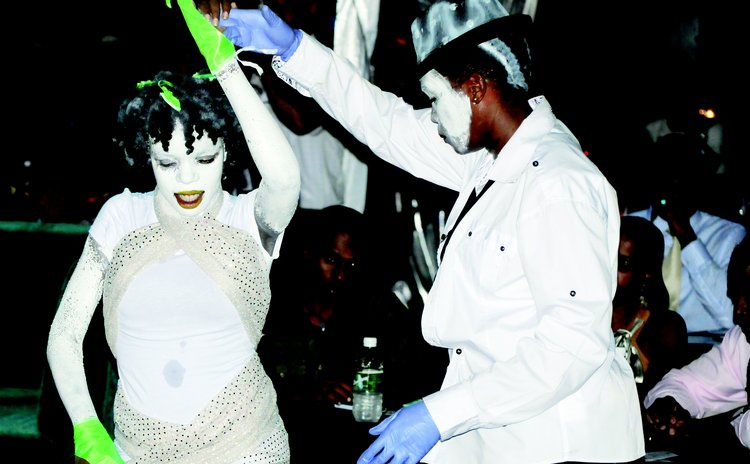 Two dancers at the opening of the World Creole Music Festival

From Trinidad and Haiti and Nigeria and Puerto Rico they'll come to play powerful, pulsating music for three nights close to the banks of one of Dominica's finest rivers.

Last week Wednesday at a two-hour ceremony at the Krazy Koconuts at Loubiere, organisers of the World Creole Music Festival (WCMF) revealed the music menu for the 18th edition of Dominica's major tourism and cultural event.

"We can no longer treat the festival as a frivolous child; it has become a responsible adult in this sphere of transitioning of our economy from its heavy agro-reliance to a more service and knowledge-based economy," said Tourism Minister Ian Douglas. "As an 18-year-old we are among the oldest, most progressive and successful of the music festivals of the region creating a platform for music and cultural expressions of a national and international scope".

Douglas added that as the WCMF "turns 18 we have to be mindful of the character and the nature of the event to ensure that it remains fresh, it remains relevant, it continues to be innovative and vibrant".

Indeed, the lineup for this year's festival seems to be fresh, vibrant and innovative although one could argue that the list lacks a "big-name" artiste.

Undoubtedly it contains artistes and bands who may be considered to be past their prime. For instance there's 57 year –old Guadeloupian Francky Vincent who has sold more than two million albums worldwide. Another senior band is Tabou Combo, formed in Haiti in 1968; a third is Trinidadian Soca artiste Denise "Sauce Wow" Belfon and a fourth is local Cadencelypso legend Chubby and the Midnight Groovers. The DFC will certainly argue that it is not discriminating on the basis of age.

Some artistes are returning to the WCMF. Jah Cure, the Reggae musician from Hanover, Jamaica, returns after a couple years; so too is T-Vice, the Haitian band. Newcomers are Elvis Crespo, an American-born Puerto Rican Grammy and Latin Grammy Awards winning Merengue singer.

Joining Belfon from Trinidad is Groovy Soca Monarch Kerwin Du Bois who de-throwned Machel Montano in the International Soca Monarch finals in March 2014. Another Trinidadian (that's three) on the WCMF line-up in 2014 is Destra who is noted for her high energy performances and eccentric fashion statements.

There are also three Haitian artistes, or bands, on the WCMF list of performers. Apart from Ti Vice and Tabou Combo, there's Klass, whom Wadix Charles, the master of ceremonies of the WCMF launch described as the "hottest band in Haiti right now".

In addition to Francky Vincent from our French neighbours, the DFC has invited Harry Soudouyen.

Then there's Flavour N'abania, known simple as Flavour, a prolific songwriter, dancer and singer from Nigeria.

Among the list of 14, there's the Dominican band Triple Kay Global (formally Triple Kay International) and Xtasy "from Petite Savanne with love; first time on the big stage," said Charles.

And, according to the DFC, more names of performers will be revealed as the countdown to the October 24-26, 2014 Festival continues.