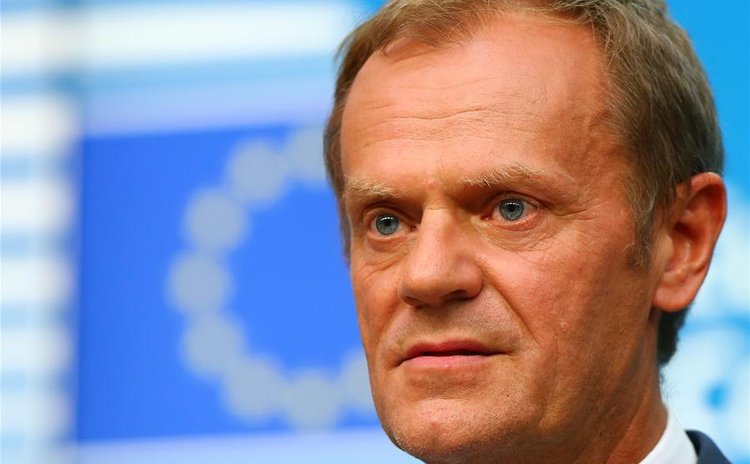 BRUSSELS, June 29 (Xinhua) -- European Council President Donald Tusk said Wednesday that leaders of 27 member states of the European Union (EU) have agreed not to grant Britain access to the bloc's single market if Britain does not accept EU rules on the free movement of people.

"Leaders made it crystal clear today that access to the single market requires acceptance of all four freedoms, including freedom of movement," Tusk told a news conference following a two-day summit of EU leaders.

"Those wanting access to our single market must implement the four freedoms without exceptions and without nuances," Juncker said.

Britain still wants a "close relationship" with the EU after the vote and seeks to secure access to the bloc's single market, as the EU accounts for almost half of Britain's exports. However, it aims to restrict the free movement of people into the country.

British Prime Minister David Cameron, who has been campaigning for the Remain side, blamed his loss in the referendum last Thursday on the EU's migrant policy, as the Leave side in the UK was fueled by fear of a flood of migrant workers.

EU leaders have warned against any "cherry picking" from the "four freedoms," namely free movement of goods, capital, services, and people, when it comes time for Britain to engage in exit negotiations.

"Whoever wants to leave this family cannot expect to lose all the obligations while keeping the privileges," said German Chancellor Angela Merkel.

EU leaders also reiterated that Britain's exit must be "orderly" and that there would be no negotiations of any kind until Britain formally notified the European Council of its intention to withdraw.

"It is up to the British government to notify the European Council of the UK's intentions to withdraw from the EU," Tusk said.

In what was likely his last EU summit on Tuesday, Cameron, who resigned after Britain's historic vote, said the task of triggering the official divorce procedure would be left to his successor.

Cameron left Brussels Tuesday night, making Wednesday's summit the first meeting of European leaders without Britain in 41 years. Tusk said it was "a serious moment in our common history."

"Certainly, one issue is clear from our debate: Leaders are absolutely determined to remain united and work closely together as 27 (member states)," Tusk said.

Scottish First Minister Nicola Sturgeon was in Brussels Wednesday and met with Juncker and Martin Schulz, president of European Parliament, to plead for Scotland's stay in the bloc.

The Scots overwhelmingly voted in favor of remaining in the referendum by 62 percent to 38 while Britons as a whole voted to leave by 52 percent to 48.

There were calls in Scotland to hold a second referendum on Scottish independence to secede from the UK as it was reluctant to be drawn out of the EU family because of the negative outcome of the UK referendum.

Sturgeon said her efforts in Brussels gained "sympathy" from EU officials, but admitted there was no "easy path."

Tusk reportedly refused to meet her as it was not an "appropriate moment." Spain, with fear of Scotland's independence fuelling separatists in Spain, has strongly opposed any EU talks with Scotland.

Brussels, to some extent, was criticized for its failure to convince Britain to stay. Juncker on Wednesday reiterated he would not resign because of the outcome of Britain's referendum vote.

The EU side did not participate in Britain's Remain campaign and there was no interference from Brussels while Britain held the independent referendum, Juncker said.

Voicing his support, Tusk said, "Juncker is the last person we can accuse of being responsible for the negative result of the referendum in the UK."

The EU leaders, without their British counterpart, are set to hold a summit in Slovakia's capital city Bratislava in September, when Slovakia will have taken over the rotating presidency of the EU, a position it will hold for six months starting July 1.

"Too many people in Europe are unhappy with the current state of affairs and who expect us to do better. Many recalled that for decades Europe was bringing hope and that we have a responsibility to return to that," Tusk said.