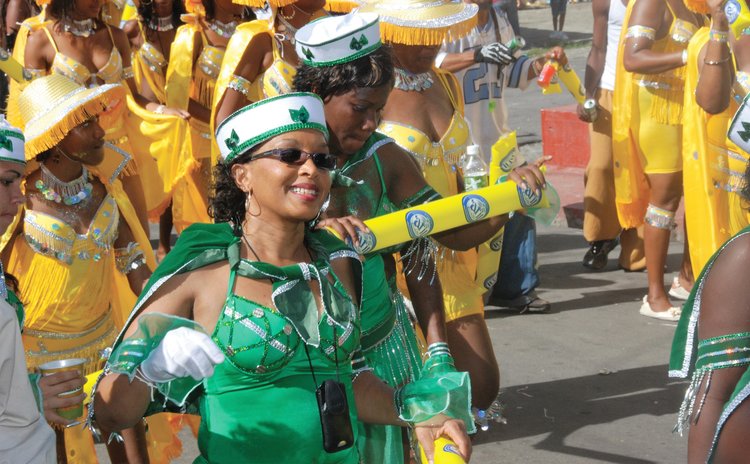 Carmen Yvonne Volney nee Severin (affectionately known as BABES by her father) was born on February 4th 1958, the third daughter of Clifford and Audrey Severin. She lived at Upper Goodwill with her parents and sisters Carol, Rosalind and Alice. At the tender age of three she attended the Convent Prep School and then moved on to the Convent High School She graduated in 1976.

Music was in her genes from her Rock lineage. She learned to play the piano under the tutelage of the late Mrs. Rosemary Cools-Lartigue who exposed her to a wide genre of music, beyond the exam pieces. She excelled, and played at shows and also at morning assemblies at the CHS. In her later years she played keyboard for the Holy Family Church Choir of the Mahaut Catholic Church which enhanced their sound and made them a formidable choir. She passed this music down to her daughters Sharlene and Giselle.

Yvonne was also a Brownie and Girl Guide. As a teen she was part of ISOSN (In Search of Something New), a hiking group which walked and climbed all over Dominica. She was a drum majorette as a teenager and later was a leader far a drum majorette group for some years.

In 1979, two months before Hurricane David, she married popular radio newsman Peter Richards. This union bore two children: Garvin Richards and Sharlene Richards Wyke. The marriage broke up after some years and in 1990 she married educator Henry Volney; a union which bore Giselle and was to last until her passing.

Yvonne loved carnival and independence season. Her mother dressed the girls up in costumes from the time they could walk. As an adult she became involved in pageantry and apart from her involvement in the drum majorettes, chaperoned (successfully!) winners in the teenage pageant, and also her daughter Sharlene who won the Miss Dominica Queen Show in 2005. She "jumped up" in For Old Times Sake, and later when her cousin Sharon Severin formed Go Girls, she joined with Giselle.

Independence was her time. She dressed up in her "jupe" and Wob Dwiyet and carried them well. She took pride in dressing her daughters in their national wear. She was photogenic and was often photographed by bystanders. One such photo was used by LIME for their Annual Creole in the Park advertisement, a truly beautiful and natural photo which typed Yvonne. She loved to attend the Rotary Functions where she "starred". She never failed to join the Creole Day Children's Parade outside Royal Bank; with co-worker Cleo, she joined in for a 5o yard "chip" before running back to work.

Yvonne loved to dance with Swinging Stars - her favourite band. The Dominica Club and Fort Young dances were a must for us. In our early years of "courtship" we spent many Saturday nights at Good Time Barbecue then at Warehouse Disco. However, the discoing ended when Giselle was born and our "big nights" became restricted to the Swinging Stars dances.

She was a wonderful mother. She looked after her children well, dressing them up nicely, and sewing for her two daughters. She schooled all the children in their homework. They often waited for her to return from work with their books, and she sometimes tested them, while on the bed, though falling asleep. Up to her passing she continued the schooling with her grandson Jaylan. I remember vividly, "Jaylan, go to the bath then come to do your work!" "Jaylan, come let me test your spelling words!" "Jaylan, your maths homework !" She took pride in their achievements, and has nurtured three fine young adults.

She was a great cook and seamstress. She sewed many of the outfits she wore, and even the prom dresses for Sharlene and Giselle. We loved her cooking, her Sunday lunches. Few other cooks came up to her high standards, and she always cooked without a recipe book. She apparently gained the skill at home in Goodwill where among the girls she was the chef'.

She worked at Royal Bank for close to thirty five years and even received a Granny Clock after thirty years of service. She made many friends there over the years. Some moved on, but Mary Isidore, Shirley, Ian, Cleo and "Robo" Lewis were her old gang, with Daddy Chess Letang, Anise and others of more recent vintage. She often told me of the joking in the lunch room, for she was a lively person and often "kixed off" there much to the amusement of those present.

She was a wonderful wife. We did have our "quarrels" for she was a "mo-dee" person, and I have my ignorant moments. However, we never shouted at each other, or ever got physical. She gave me the cold shoulder and the silent treatment and spoke to me very formally. I merely told the girls "your mother is vexed with me." They never lasted more than two days and the making up was even the sweeter. She was always there for me and when I was struck down with my heart attack in 2008, she fought for me, sheltered me, and managed my recovery like a hawk. I remember going to a 6oth birthday party where the food was scrumptious. But she was there at my side "No! Not that! No! NO!" She managed my recovery, as she did most of my without my realizing it! She was the driving force in the marriage. She took the decision for us to build at Bet. She managed our finances and by prudent management furnished our home nicely over the years. She pushed me to take the job of Director of Sixth Form College; taking me out of my comfort zone as a teacher at SMA. I often resisted her pushes, but she always won out in the end. She was a wonderful wife and companion.

She was struck down twice in the new millennium. in 2002 she had to be air lifted to Martinique with a pheochromocytoma and there we met our "guardian angel" Linda/Alex Montanede, Cleo's sister, who helped us there and ever since. God bless you, Linda! She had an operation there in January 2003, and resumed a normal l fe. In 2010, she collapsed and was air lifted to Trinidad where they operated on her. This time though unsuccessfully and she became paralyzed from the waist down. For almost seven years she bore her affliction with a smile and a magnificent spirit. She had her TV and her hubby at her side to watch all shows, from sports, to judge Judy, with all local Carnival and /independence shows (a must!). She also grew closer to our neighbour Helen Pascal who became a sister to her. When her daughters departed overseas she remained in contact with them on her Samsung phone on a daily and even hourly basis. She was always cheerful with a wonderful spirit despite her physical deficiencies.

This time in 2017, the third time, was unlucky. The Lord was ready for her and brought her home so she could play piano for him. All her friends will miss her but it is the will of the Lord. RIP dear wife.