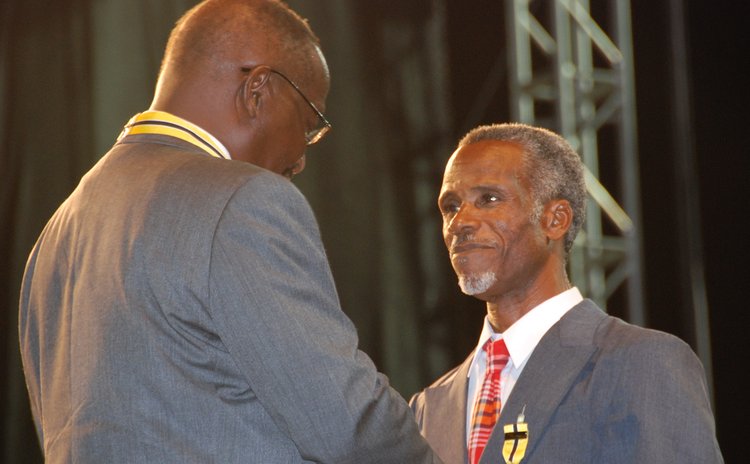 Markus Zusak, in "The Book Thief", exclaims, "It kills me sometimes, how people die." How true this is for us who today mourn the death of Phillip known to many as Papoye.. Unexpectedly, unannounced, untimely, he just went. Before we could say good bye he was gone. He just parked his little jeep and went to sleep; and we dare not wake him up. But while he sleeps, he is awake in our minds, for we see Papoye the father, the friend and the forester, in one unique personality.

Phillip's parents may not have had much influence on his accomplishments because both his mother Cleo and his father Victor died while he was very young. Their socio-economic status did not allow them to furnish him with many of the material things that today's children take for granted. But Phillip lived and was sustained by the lessons of character they taught him. He joined them on Wednesday, 19th February, 2014 to proudly report that he had followed their teaching, kept away from trouble in its various forms and worked very hard to obtain what he had. Today we cherish that legacy with his loved ones. .

In many ways the positive traits of Phillip are mirrored in his sons whom he was very proud of. The names of his first two sons signal to us Phillip's intention to train his boys to exhibit his image and likeness. "He cared very much for his boys", Alice proudly recalls. She remembers that he always had two tins of five-pound Dutch Lady powdered milk under his bed – that was a must - to make sure that if for any reason funds became short, there was milk to feed his children.

His son Alphil Lennan laughed as he recalls his father's unorthodox way of demonstrating care and concern for them. "While playing or running around, if one of us would fall and bounce our heads, he would quickly come to investigate and say things like, "Yes, mash up your head; not now you will feel it, eh; is later!" Crude you may say, but it worked; Alphil never forgot. Much later when they were old enough, Alphil remembers that he partied together with his dad as if they were brothers. They both cherished those days of joyous bonding.

Phillipson and Alphil proudly remind us that Phillip was a significant contributor to the growth and development of the Triple K band which had its genesis in Laudat. His first white truck was dedicated to carrying Triple K's equipment. His old disco became the band house, free of charge, to Triple K. The noise coming from the band house until wee hours of the morning deprived him of sleep continuously, but he endured it for the band to thrive. Through various friends and contacts, Phillip also obtained equipment for the band. In fact, what many do not know is that Phillip, for all intents and purposes, was the Manager of Triple K on its first tour of Saber. Indeed, an unsung hero he was for Triple K International.

Many of us today despise gangs. But actually, there are some good gangs. Phillip was part of a good gang of four – Lindy (Castro), Alie (M&J), Hector (Sikiye) and Phillip (Papoye). It was in that gang that that some of the greatest qualities of Phillip became evident. They all describe him as a "nice man". M&J recalls when his grandmother was sick; Phillip would regularly come and get him without charge to take him to see her. "I can never forget that", M&J notes with emotion drowning his words. Sikiye echoes similar sentiments saying, "Anything I asked Phillip for he would get it for me even though he had to ask someone else." But where Phillip excelled the most was at work. Alice, his wife, says, "He was dedicated to his work." His friend Alie says, "He knew his job well although it was so funny that he was afraid of snakes." He was a Forester 1of the highest quality.

He was a short man, but among the forest officers in Dominica, he stood exceedingly tall, a factor which Government took note of and in 2008 awarded him the prestigious Long Service Award. Ronald Charles and Arlington James, two prominent Forestry administrators, could not have said it better in the following affirmation on behalf of the Division of Forestry and Wild Life, "Phillip Matthew was a role-model to many an employee at the Forestry Division, and was a dedicated officer who hardly missed a day's work. He knew his work; he knew the forest; he knew and enforced the laws; and he worked very well with everyone. He was very committed to the job."

Phillip's love for the forest is probably what triggered his love for hunting. Whether it was the dangerous rocks of Pointe Michel tracking wild goats or the slippery banana fields at Gros Morne, searching for agouties, the roar of Phillip's 20 gauge shotgun seldom was in vain. He was a good shot. That marksmanship was probably born in the camps of the Dominica Defense Force of which he was a member. The forester and the soldier fused to create a passionate hunter par excellence.

Phillip left but his memory stayed behind. So we must learn from his memory. William Penn was right when he said, "Death is no more than a turning of us over from time to eternity." Phillip left us his life in time as father, friend and forester. But what about his eternity? Alas! We are not privileged to look into it. It is known only to the One who tells us, "Prepare to meet thy God." (Amos 4:12), "For what shall it profit a man, if he shall gain the whole world and suffer the loss of his soul" (Mark 8:36).