Eulogy: "He was neither presumptuous nor pretentious" 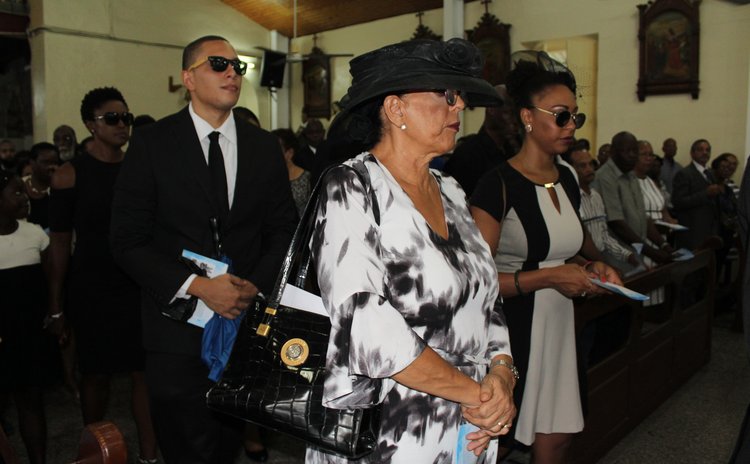 Judith Pestaina, front row, at the funeral of her husband

What can one say that has not already been said about Gene Clement Pestaina, a treasured and beloved husband, father, grandfather, brother, uncle, friend and colleague. His birthplace was the village of La Plaine and he was the first son/child of seven born to Barbara Shillingford. His father was the late Earle Pestaina of Antigua.

For those of us who knew him more intimately than most, we all knew that his bark was worse than his bite but he could and did bite at times.

Born under the sign of Leo, he was truly a lion in many ways than one. He liked to dominate the stage and looked forward to taking centre stage in Court where he relished the thrust and parry of criminal proceedings. He loved an audience and would often say to me "When are you coming to hear me in Court" to which I would always reply, "But I hear you at home every day". Home was also a place where he 'held court' and when I had to defend myself I would often say to him "If you wanted someone who would just keep quiet and agree with you and do what they are told, you should have married a "Moo Moo". So that was the end of that case.

But seriously speaking, Gene, as many would tell you, was a straight talker; what you saw was what you got. He may not have been diplomatic in the pure sense of the word, but if being diplomatic meant not being honest, then his preference was obvious. He was neither presumptuous nor pretentious and did not much care for material wealth. We often joked about him being the 'poorest' lawyer we knew.

He took pride in the fact that he was a self-made man and a trail blazer. Like so many of his generation who did not have the opportunity to pursue a tertiary education immediately after completing secondary school — almost a given today — after a brief stint in the Public Service, he decided to join the Police Force. His GCEs enabled him to be recruited as a Cadet Sergeant along with Harry Cyrille, Lennox Royer and Henwood Powell. With an attractive salary of about $182 a month, he thought he had won the lottery! Cadet Sergeant No 161 graduated to the rank of Assistant Superintendent forming long lasting ties with his 'men' who maintained strong bonds of friendship with him until his passing and who voluntarily and assiduously represented his interest.

His natural ability and character eventually led him into the legal field which provided him with fodder for his prosecutorial skills. He was tenacious in his approach to his work and would not shirk from his responsibilities which were at most times voluminous and onerous. However, one would never have guessed given his love for the profession and the way he made it look all too easy. So I got used to his 'need' for routine trips to "Robo's" after work followed by mandatory visits to his regular haunts in Massacre and Mahaut where he sought out his childhood and school friends to shoot the breeze, relive their boyhood escapades while downing some 'shots'. No quarrel with that!

Although he may not have expressed it overtly, his love and concern for his children, siblings, grandchildren, nieces and nephews were boundless. Shelley, Warren, Grant, Avis (deceased), Kathy, Tessa, Cora-Ann, Chris, Anthony, Cleve, Cheryl, Jacqueline, Joyce, Yvette, Karen, Maurice you should all be extremely proud of him and remember that his affection for you was deep and sincere. I know you all loved him and will miss him as much as I do. May he Rest in Peace.