On the eve of the Soufriere bye-election, it appears that Hidges Adams of the United Workers Party has been asked to fight a tough and losing battle 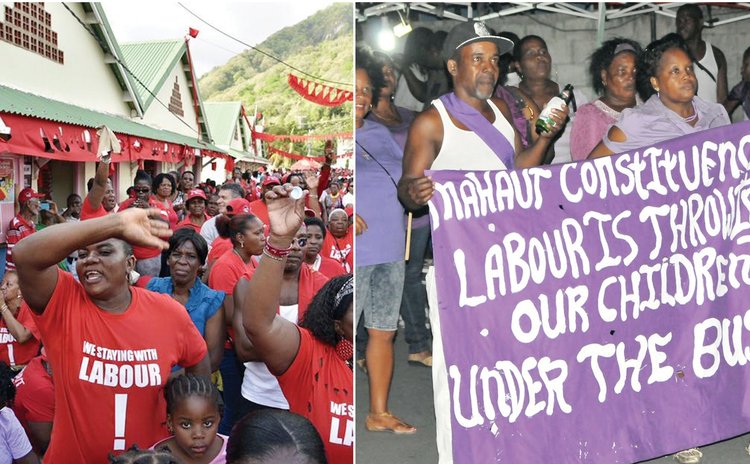 DLP,left, and UWP supporters campaign in the Soufriere Constituency

It is like trying to climb a mountain that is much too high to conquer, or more appropriately, prodding an unwilling sacrificial lamb its slaughter.

This is the situation facing the United Workers Party (UWP) candidate Hidges "Higgs" Adams in next week's by-election to choose a parliamentary representative for the Soufriere constituency to replace Ian Pinard who was forced to step down last month following his arrest and subsequent bail in connection with a matter which The Sun is barred from mentioning due to legal reasons.

However, political observers say the UWP candidate is about the only one who believes his rhetoric. "It is going to be a steep hill to climb. My expectations are it will be no different [from the general election]. The government should win. Unless something [drastic] happens, they [the DLP] will win it," Peter Wickham, the Barbadian pollster, told The Sun.

In any event, history is not on the opposition candidate's side. The DLP under Roosevelt Skerrit has been a mean, uncompromising election machine that does not lose elections. In addition, Wickham reminded The Sun, there is a rule of thumb that, unless there is a large national swing against the incumbent, or the contest is in an opposition stronghold, incumbents seldom lose by-elections.

In the most recent case in the DLP stronghold of Grand Bay following the passing of Prime Minister Pierre Charles in 2004, the ruling party's candidate John Fabian crushed the UWP's Frankie "Krazy Tee" Bellot.

Following the resignation of Brian Alleyne in 1996 to take up an appointment as a judge of the Eastern Caribbean Supreme Court, his Mahaut seat, which was held by the then opposition Dominica Freedom Party, went to the incumbent UWP in the by-election.

Adams is facing a similar fate to Bellot in 2004. In the 2014 general election he attracted only 38 per cent of the votes cast, compared to Pinard's 62 per cent. In addition, the DLP is treating this poll as a general election, bringing in the big guns and spending like their lives depend on it.

"In some other places, by-elections are a protest vote; but in this case, from what I can see of the campaign so far, it does not appear that this is the case," one political observer who spoke to The Sun on condition of anonymity because his position, told The Sun.

"The Labour Party is putting on, almost like a general election, the full power of their financing into this campaign. They are hoping to crush the UWP with such power and such numbers, that it would . . . crush to a certain extend the criticism [of the party that it condones the abuse of children]."

There is also the issue of the opposition's campaign strategy which observers say appear disjointed and lacking focus.

The UWP is pushing the issue of child abuse in an attempt to link the DLP to the issue that forced Pinard to quit. It has sought to generate the greatest odium towards the former member of parliament, and by extension the entire DLP, including the current candidate, by seeking to convince voters that the ruling party are worse than King Herod.

But observers see it as naïve and a fantasy which will melt in the Soufriere heat under the pressure of a DLP which is more concerned with the accumulation of wealth and winning elections than with morality, the protection of children or the development of people.

Wickham suggests that the UWP should be careful not to see the by-election as a referendum on the Skerrit administration, simply because it is sure to lose the seat. Instead, it should present a strong, clear message designed to both prevent an embarrassing loss and to demonstrate to the entire country that it is ready to seriously challenge the DLP.

Adams was not the UWP's first choice as a candidate but no one else was willing to run in the constituency, one longtime political observer told The Sun.

It was a more than subtle suggestion that it does not matter from which angle it is viewed, it is becoming more and more evident that Adams is indeed a sacrificial lamb.