Exploring the links between crime, violence and poverty 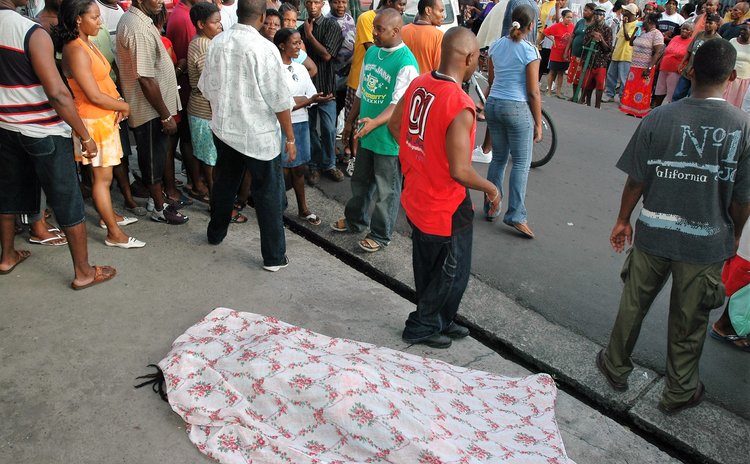 Body lies on pavement in New Town in 2005

It is only the end of June 2017 and already there are 12 homicides in Dominica, a figure that already exceeds the number of killings in 2016. Justifiably, the police hierarchy is concerned.

The latest killing involved Andy Carbon, from Boetica, whose lifeless body was found face down in a pool of blood on the Bay Front in Roseau last Friday morning. Carbon was a vagrant

Responding to the increase in killings, at a press conference on Friday last week, Police Chief Daniel Carbon called for assistance from the public to help reduce the number of murders, a dozen in six months in a country with a population of less than 80,000. But escalating crime is not a Dominican problem only.

Crime has been a major constraint to the development of the Caribbean and leaders must now do much more than talk about the problem. According to the World Bank report: Crime, Violence and Development Trends, Costs and Policy Options in the Caribbean murder rates in the Caribbean are higher than in any other region of the world and assault rates are significantly above the world average. The causes of such alarming statistics are well known.

For instance, we know that Caribbean countries are fast lanes for the cocaine traffickers of Latin America and that gun ownership, an offshoot of the drug trade, is the fuel that generates violent crimes.

Youth violence driven by alcohol abuse, we are told, has become a major threat to public health and criminal deportees from the United States have directly and indirectly contributed to the increase in crimes in the region.

Additionally, the criminal justice system is ineffective and inefficient; and the emergence of the gang culture among our youth is one of the most disturbing aspects of the growing crime culture.

Most importantly, the root of today's lawlessness has been attributed to the loss of respect for the State and the rule of law. This situation is acerbated by the perception of high levels of corruption in high places.

And, most importantly, there are the effects of poverty and destitution as the recent case of Andy Carbon, the vagrant, illustrates.

The point that we need to stress here is that as we continuously discuss the high incidence of poverty in Dominica we fail to consider its causes and effect. It is our view that poverty means much more than someone's inability to pay bills. Poverty not only imposes short-term hardship on thousands of Dominicans, it also has long-term consequences for children. The evidence is overwhelming that poverty compromise children's health, reduces their educational prospects, increases their risk of arrest and incarceration and diminishes options for the future.

Additionally, we are of the view that high levels of poverty and unemployment have a significant impact on levels of crime and violence. Poor young persons in particular generally have little regard for values and corruption and are prone to be dependent on politicians who offer money in exchange for political support.

But we do not expect government to support the view that poverty is the major cause of violence as officials continue holding "town halls" with communities around Dominica in response to demands for jobs and basic living conditions.

In the past Prime Minister Skerrit has contended that his government's initiative to deal with crime will bear fruit although we do not expect the prime minister to acknowledge the impact of poverty on increasing levels of crime.

According to Skerrit "the whole idea is to let people understand that crime is a societal problem which requires a societal response. Spending a lot of time blaming others is not going to solve crime. It is about each one of us recognizing that we have a part to play towards fighting crime, and this is what we are seeking to do."

Undoubtedly, increasing crime rates are caused by its high levels of poverty. Speaking at the University of the Virgin Islands a few years ago, on the topic: "Poverty and its alleviation in the Caribbean", Dr. Compton Bourne, the former President of the Caribbean Development Bank, contended that poverty contributes to societal exclusion, loss of self-confidence and absence of commitment to the future of the community.

"Even though poverty is not the only cause of crime, it is a cause," Dr. Bourne said.

In the Dominican context poverty, we argue, is caused by low income and high unemployment and, to a lesser extent, inequality in the distribution of the nation's wealth and resources.

Additionally, the volatility of the economy has had a major influence on the levels of crime. Few persons will disagree with the contention that the collapse of the banana industry, due mainly to the removal of tariffs on the European market, has decimated the economy of the rural sector.

While all these facts confront us, the Government of Dominica has been asking Dominicans to defy simple logic and accept its analysis and pronouncement that the level of poverty has decreased significantly over the past decade. Perhaps the government is either unaware or has failed to tell us that hidden in its analysis are the proceeds of crime, money laundering and schemes that continue to finance consumption.

Given the fact that most of Dominica's poor live in the rural areas where the majority of the population depends on agriculture, it is basic common sense that if we are to reduce poverty and crime our economic and social development policies must be deliberately skewed towards the agricultural sector. Broad-based rural development will not only benefit the economy of the island and decrease poverty and the drift of people from rural areas to Roseau but will reduce crime as well.