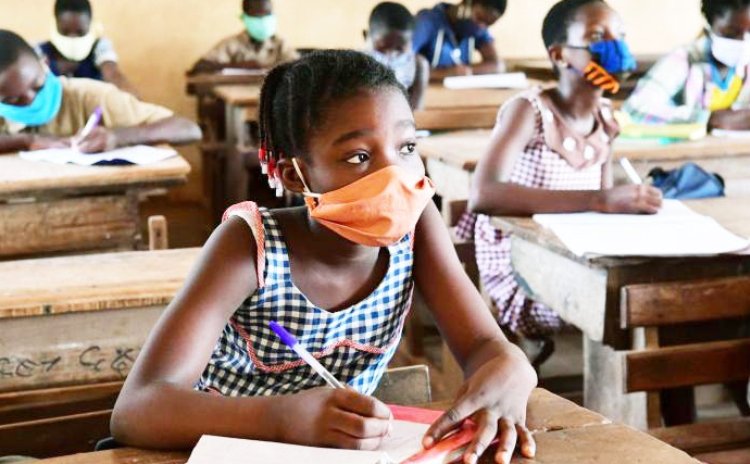 Patricia Joseph- Edward, a mother of two who resides in Wallhouse says she'll be adding extra ginger to her children's morning cup of tea- an immunity boost -before she reluctantly sends them back to school whenever the date is announced.

On the other hand, an excited Diane Gordan says that her seven-year-old daughter Makalie, classes commence at 8:00 am, but chances are on the first day, she'll both be standing outside of the school gate by 7:00 am.

Just when it seemed like a little normalcy might be returning to the lives of many families at long last, the deep-seated angst and confusion that comes with parenting amid a pandemic have returned.

Many parents are feeling conflicted- others happy- about the news made by prime minister Roosevelt Skerrit on the reopening of school on a phased basis this month; a timing that coincides with what may be the peak of the latest surge of the pandemic.

"I'm so tired. This has gone on for so long," said Gordan, as her other three children vie for her attention in the background. "Also, I can't handle all the Zoom stuff. It's so frustrating. It's been two years. You reach a point of fatigue."

Joseph- Edward, who quit her full-time job at the start of the pandemic to assist her children full-time says that even though her 5, 7, and 11-year-olds are too young to be vaccinated, she remains committed to in-person learning, but is still scared.

"It's a hard choice to make, and I am so scared of them catching the virus, but I also know that they can't continue with this online learning forever. Though I am iffy about it, I also know that it just makes sense to send our kids back to school, where we know they're going to thrive," she said.

The piercing uncertainty of the situation leaves many parents confused about how to proceed and what is safest for their children.

Some feel strongly that safety measures have not been rigorous enough at school and are hoping that enhanced safety protocols, like mandatory vaccination among teachers and other members of staff, can be implemented before face-to-face resumes.

Samuel Sabroache, says there is more to be worried about than reassured by as he and his partner prepare to send their son back to school.

With his 9-year-old too young to be vaccinated, Sabroache is most frustrated that he has no idea whether his son's teachers have gotten the jab- an extra defence against the virus, he says.

But despite his apprehensions, the father of one says that he's looking forward to the reopening of school as he notes that keeping his son at home might be the best bet for his physical health, but fears the worst for his mental health.

"They need school to socialise," he stated to the SUN. "They need that peer engagement, therefore I just feel like those benefits far outweigh the risks of the virus itself."

For others, the plan is to wait it out and hope for the best. Latoya, for one, intends to keep her little boy at home from primary school until the spike has passed and hopes that the officials rethink their decision on the reopening of school, at least for the time being.

Having previously supported calls for the resumption of face-to-face learning, the young mother says that the ongoing wave has changed her perspective.

"We will wait to see some numbers drop down," she said. "Right now we are not comfortable when we are at the top of the pandemic wave. To me, it just isn't safe. I have a four-month-old baby at home as well as my 89-year-old mother-in-law. I am not going to send my four-year-old out in an environment not knowing if he will be properly monitored."

Some are most worried about schools shuttering again, fearful of remote learning, which led to emotional damage and learning loss for many families.

Many of the teachers we spoke with also expressed mixed reactions over the resumption of face-to-face classes, but collectively agree that the present online learning has created a myriad of challenges for schools across the island.

"While it is not an ideal situation, it is a little bit better than online, because we feel that we are better able to reach them when they are at school," said Mrs. Joseph, a senior teacher at one of the secondary schools in Roseau. "The beauty about face-to-face is that you feel that learning is taking place as we can engage them (the students)."

Skerrit has announced that primary schools with a smaller population with adequate classroom space will conduct face-to-face instruction from 9 am to 1 pm for three days a week -Monday to Wednesday and online Thursday and Friday. At primary school considered medium size with adequate space for the stipulated social distancing protocol, students from grades K to three will attend face to face three days per week, Monday to Wednesday, while students from grades four to six will attend face to face on Thursday and Friday.

For primary schools considered large, grades three, five, and six will attend face to face two days per week -Monday and Tuesday- while students from k to two will attend Wednesday and Thursday. Students of grade four will be required to conduct in-person learning on Fridays.

The prime minister further revealed that special consideration has been made for the St. Martin Primary School (SMPP) which has a population of over 300 students.

At the secondary level students from each form will attend face-to-face learning one day per week from 8-1. form five- Monday, form four-Tuesday, form three- Wednesday, form two-Thursday and form one-Fridays.

In the case of the Dominica Grammar School (DGS) and the Goodwill Secondary School (GSS) which share the same facility, he said that the GSS will operate a morning shift since space at the school permits for such to be done.