May Day 2015 Special Feature:DAT accuses DPSU of poaching; DPSU says that charge is "baseless" and "nonsensical" 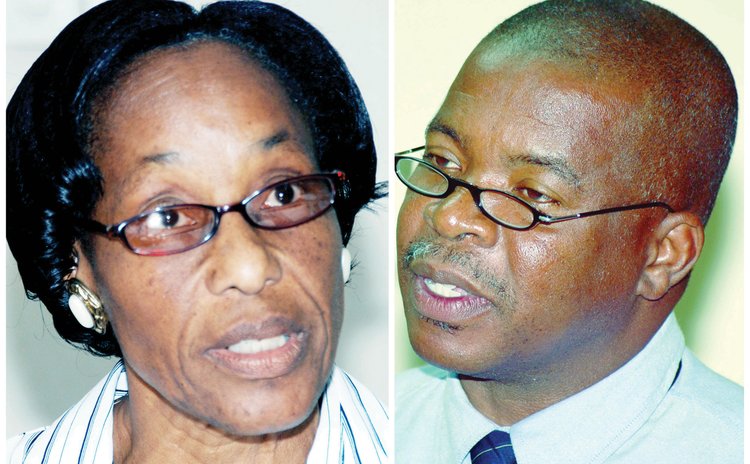 The words are spoken but not directly. The distrust is made clear through the legions of plot twists, fingers pointing with unspoken accusations and passionate denials. The resentment is palpable.

Neither the Dominica Association of Teachers (DAT) nor the Dominica Public Service Union (DPSU) will name each other, but it's clear that the only two trade unions which represent public servants here do not get along.

The head of the largest private sector union, Kertiste Augustus of the Waterfront and Allied Workers Union (WAWU), knows it too.

"There seems to be hostility between at least two of the unions," Augustus told The Sun in an interview about the state of the trade union movement here. He did not name the two, but they were obvious based on his comments on the relationship among the private sector unions.

The DAT president, Celia Nicholas, hinted at the antagonism that exists with the DPSU when she neglected to name the larger of the two pubic workers' labour unions among those she wished to "commend" for their support of her organization.

"From the DAT I have to commend WAWU, the Dominica Trade Union and the National Workers Union for their posture to the Dominica Association of Teachers and they have been there to hold our hands and support us," she told The Sun, responding with an emphatic "no" when asked about the DPSU.

At the heart of the hostility between the unions is the vexing issue of poaching. Augustus mentioned it at the DAT's 18th Annual General Meeting (AGM) earlier this month, and in his interview with The Sun, he stressed that trade union leaders "should not encourage that".

But Nicholas is convinced that there are "open efforts" to engineer a reverse takeover of sorts of the DAT by stealing its members.

"The DAT, we have been victims of that," she said emphatically, without naming the perpetrators. She pleaded for an end to the "divide and rule policy" and called on all labour unions to respect each other.

"We have to respect one another. Our views on certain matters will vary, our political associations will vary, and this has to be respected, and when efforts, open efforts, are put in place to draw members from any particular union it should not be encouraged. You are creating a cancer within the trade union movement."

However, the man who appears to be the target of these accusations, the DPSU's general secretary, Thomas Letang, has angrily denied that his union has made any attempts to raid the DAT's membership.

In fact, he appeared puzzled by what he saw as the continual repetition of palpable nonsense which creates nothing but an illusion. Describing the accusations as "baseless" and "nonsensical", Letang made it clear he was not prepared to entertain a discussion on the issue.

"On the question of poaching, my response to this is that the PSU will not respond to any statement about poaching which may have resulted on reasons that are baseless, nonsensical. We have made it abundantly clear that we have never been involved in any poaching," the union leader told The Sun.

He explained that there was an instance when a member of his staff who had gone to pick her child up from school, accepted some application forms from "certain teachers who are not part of any union (who) asked her to drop some forms". This, he argued, was not poaching.

"As secretary general of the PSU, I have never asked any staff to (recruit) any teachers," he said.

An emphatic response, a categorical denial, in forceful words that lay bare an intense, almost tangible sense of antipathy between two bodies that champion the cause of government workers.