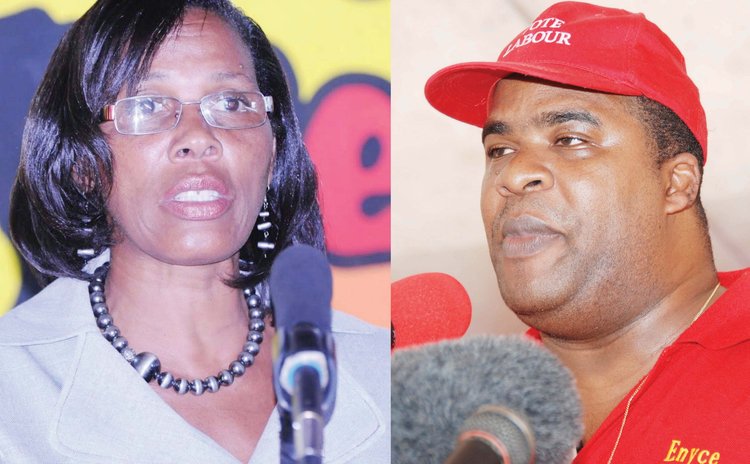 Grand Bay is also the solid rock on which the foundation of the ruling Dominica Labour Party has been built.

Well, Grandbay, the foundation stone, is currently rocking from within as two Labour Party stalwarts, the current parliamentary representative, Justina Charles, and chairman of the village council, Edward Registe are engaged in a winner-takes-all battle. Prime Minister Roosevelt Skerrit is the referee.

Edward Registe is the current Deputy Speaker of the Dominica House of Assembly and the Chairman of the village council, the former secretary of the DLP executive and he is the public relations officer of the Dominica Water and Sewerage Company (DOWASCO).

While Justina Charles, whom Registe is set to replace as the DLP contestant in Grand Bay for the upcoming general election, is a qualified and registered nurse, the widow of Prime Minister Pierre Charles who died in 2004, and winner of two elections following her husband's death, in 2009 and 2014. She is a member of the Roosevelt Skerrit Cabinet and holds the portfolio of Minister of Youth and Affairs, Sports and Constituency Empowerment.

Now, Nurse Charles, as she is popularly called in Grand Bay, will be giving way to Registe, according to several DLP stalwarts in Grand Bay.

"It was a ding-dong battle to have Registe as the candidate; the parl-rep had her chance and the people at several meetings insisted that Edward "Ed" Registe was their choice and if he was not the candidate for the DLP they would have him run as an independent candidate," said the DLP source who requested anonymity to speak candidly on the political situation in Grand Bay.

For his part Registe neither confirmed nor denied that he would be replacing Nurse Charles at the upcoming general elections.

Similarly, Charles did not deny or confirm that she is to be replaced as the DLP Grandbay candidate.

"I am not answering that question from you…the only person I am answering is Skerrit," she told the Sun's reporter.

But several DLP observers in Grand Bay have confirmed to the Sun that the word on the streets in the constituency is that Edward Registe will be the candidate.

"Justina told us in the constituency that she will speak when the Prime Minister speaks," said a DLP supporter.

But whether Charles gives up to Registe or not, Grand Bay is likely to remain solidly Labour, based on the constituency's voting history.

So, the Ed-Justina fight is likely to remain just that- a fight within the family.