Frank Baron's State Funeral will be held on Saturday, April 23, 2016 at the St. Gerard's Hall Chapel 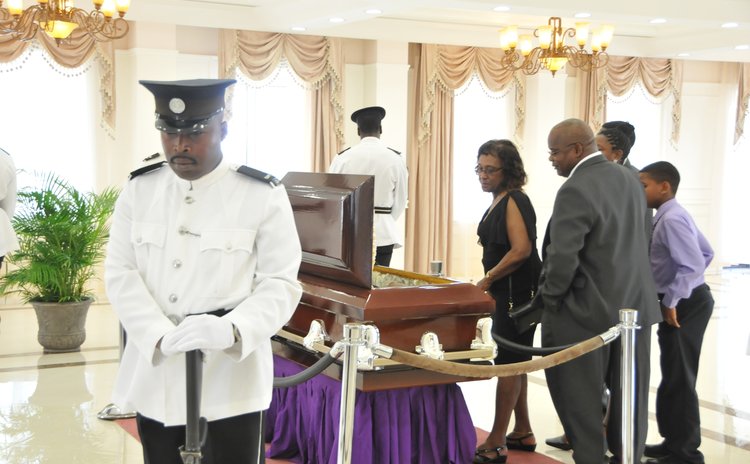 Frderick Baron, right, takes a look at his father's body at the State House this morning

On Saturday family, friends and Dominicans generally said goodbye to the late Franklin A.M. Baron, the Chief Minister of Dominica from 1960-1961.

Frank Baron's State Funeral was held on Saturday, April 23, 2016 at the St. Gerard's Hall Chapel followed by burial in the Roseau Catholic Cemetery.

Earlier, the Government of Dominica earlier declared a period of mourning from Thursday, April 21, 2016 to Saturday, April 23, 2016.

Franklin A.M. Baron was the husband of Mrs. Sybil Baron and the father of Royette, Frances, Edward, Frederick (Member of Parliament for the Soufriere Constituency 2000-2005), Annie, Dave, Francine (Minister for Foreign Affairs, CARICOM Affairs, Minister of State in the Office of the Prime Minister responsible for Project Planning and Implementation) and Franklyn.

Franklin 'Frank' Baron, the elder statesman of Dominica's politics turned the final page in his life story and took his last breath on April 9 at the Princess Margaret Hospital.

His passing brought an end to a public life, filled with achievements in politics, business, the media and community service.

Born on January 19, 1923 in Portsmouth, he came to prominence in politics in the 1950s, rising to the position of Dominica's first Chief Minister and Minister of Finance in 1960.

Before that, in 1957, Baron successfully contested the elections, forming the dominant group in the Legislative Council and becoming the Minister of Trade and Production.

EO Leblanc defeated Baron at the polls in 1961 and replaced him as Chief Minister.

In Parliament, Baron served as a member of the Legislative Council and Executive Council. He was twice elected as Parliamentary Representative of the Roseau South Constituency.

Speaking on Q95 FM radio's 'The Hot Seat', biographer Justice Dr Irving Andre described Baron as having been one of the main political figures in the 1950s and credited him for playing a significant role in the introduction of ministerial government.

He told the Hot Seat that Baron introduced several significant resolutions in the legislative council and was also a critic of the Patrick John administration.

He was also the point-man for the Government's electrification programme for rural Dominica in the 1980s and was instrumental in raising funds to build the psychiatric ward, Andre said.

In 2009, Baron returned to political prominence with a hard hitting statement against the Dominica Labour Party (DLP) and its leader, in which he referred to his friendship with Dame Eugenia Charles.

He said, "In the early 1990s, when internal dissent threatened to destroy the Dominica Freedom Party government, I wrote to my close friend of over 40 years, Mary Eugenia Charles.

"I warned her to take control of her government. I warned her that selfish ministers were eating away at the innards of her party,"

After his death, a DFP statement said Baron accomplished several development projects for Dominica and for set the Melville Hall Airport project, among others, in motion.

The DFP said Baron also served on several statutory boards and commissions. The party hailed him as a "successful visionary and an astute politician".

He bought the majority shares in the Chronicle newspaper in 1990 and played an active role in the management of the newspaper until he sold it.

He also established Paramount Printers Ltd. and, at the age of 90, bought the Nature's Water plant.

Prime Minister Roosevelt Skerrit described Baron as a straightforward person who made a "contribution to our country over an extended period of time."

"He was one of the Dominicans who remained in Dominica to work for the well-being of our country," Skerrit said.