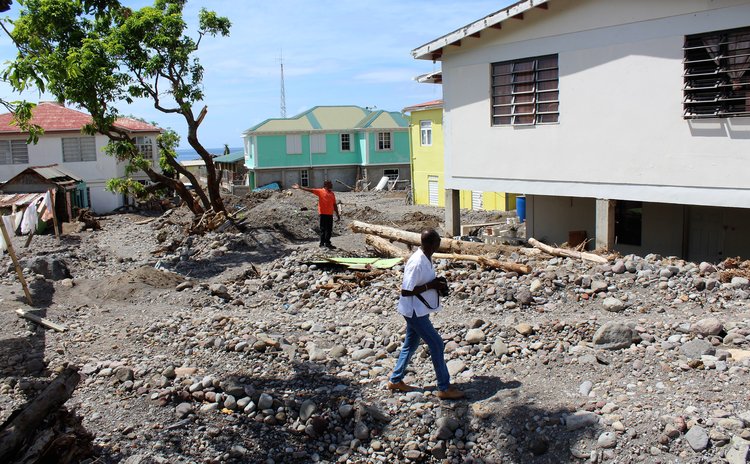 Area, centre and left, site of Louis's home at Coulibistrie

Two years ago Witnel Louis, a farmer from Salisbury/Coulibistrie, suffered heavy losses from Tropical Storm Ericka; he lost his vehicle. In September 2018, he was again at the receiving end of another deadly storm- Hurricane Maria. He lost his house.

Speaking to the SUN, Louis, 85, said Maria swept away his house and all its contents as well as his newly-purchased vehicle.

"My home was totally demolished and disappeared after Hurricane Maria. I left my home just about one hour before the hurricane struck us in Dominica. My wife and I went to spend the hurricane with my next-door neighbour. She owns an up and down concrete structure so we decided that it would have been safer to move to her place and thank God that we did because if we had stayed at home, we would have been dead," he said.

Louis said he was not expecting that amount of damage.

"I went to my neighbour who had a relatively new house and I said the following day I will come back to my home and get things going as usual. But on return, I had no house. Hurricane Maria did damage beyond recognition.

"I had also decided to park my vehicle behind someone's house (a neighbour) who I thought had a safe spot, but that was not to be.

"The next day after the hurricane I looked for my house, it was gone…disappeared, nowhere to be found and my vehicle that I had just purchased was gone also. Maria was devastating. I saw and witnessed Hurricane David but Maria is no comparison. I just could not believe that damage done by Hurricane Maria. This storm was just a monster and I have suffered heavily losing all that I have as a result. I am not a young man anymore and I can't take another one like that. I now have to try my best to make a living, all over again.

"My farm has been totally destroyed, my oranges, grapefruits, cocoa, coffee all that has gone. I still don't have access to many parts of my farm. I have to rebuild my house; get another vehicle to get access to my farm…it is just not easy at all. I have lost everything on my farm, all my citrus gone. I think the damage is like hundreds of thousands of dollars. I will not discourage people to come back to the farm after Maria. But we have serious issues with wildlife eating all that we have. Giving up the farm is just a no-no."