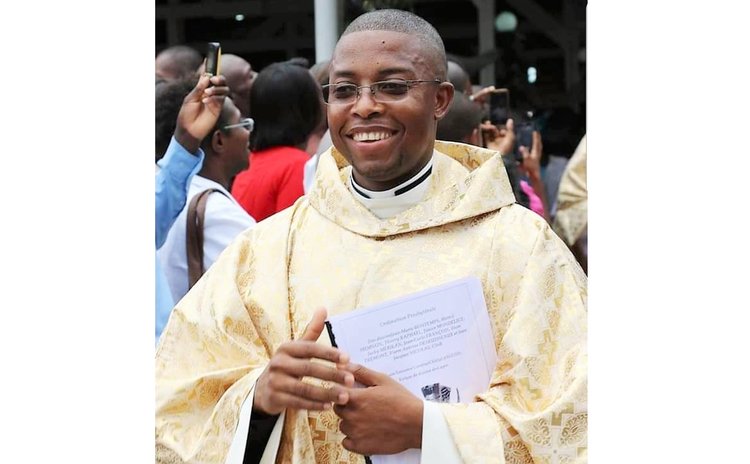 "The first days he preached in St. Joseph, he captured my heart. We have lost an amazing priest."

"May angels lead you to paradise, Father Jacky. Such a wonderful soul. The Catholic Church lost one of its best."

"One of the best priests. Humble, dedicated to the church and its members, and a great human being. May your soul rest in perfect peace Father Jacky."

These and other condolence messages flooded social media and other platforms as the Catholic community and other Dominicans fell into a state of mourning for the late Father Jean-Jacques "Jacky" Merlian C.Ss.R. of Haiti who died suddenly on July 19, 2021.

Father Jacky, 39, was a member of the Redemptorists.

Professing his vows on August 11, 2010, he was ordained to the diaconate by Archbishop Joseph Tobin on October 11, 2014, at the Church of St. Ignatius in Chestnut Hill, Massachusetts. He was ordained on May 31, 2015, in his country of birth at the Church of Saint Gérard de Carrefour-Feuilles by Cardinal Chibly Langlois. He celebrated his first Mass in the Chapel of the Immaculate Heart of Mary of the Missionary Sisters of Charity on June 1, 2015.

Father Jacky then arrived in Dominica and was assigned to St. Ann Parish until 2019 and later to St. Joseph where he served until his passing.

Father Jacky, an avid soccer fan, also spoke French, Creole, English, and Spanish. In 2010, he composed his spiritual autobiography under the editorial guidance of Fr. Aaron Meszaros, C.Ss.R., and entitled it "The Spiritual Auto-biography of the Little One."

Speaking to The Sun, Superior of the Redemptorist Order, Father Matt Allman said, though Father Jacky complained of feeling unwell for a few days, his sudden passing at the St. Clement House in Belfast was shocking.

His pain evident, Father Allman said the death of Father Jacky will create a void in the Catholic community.

"He was a good man who is irreplaceable. There's no other Father Jacky so we will be grieving his loss and we don't know what we will do next. We will meet and talk but for now, we have no plans about what comes next," he said.

He said Father Jacky was greatly loved by many and his "tremendous" work will be his legacy.

"Father Jacky was beloved. We loved him very much and he was a tremendous Minister, energetic and grateful, gracious, and a wonderful Priest who was doing great things in his parish. We are overwhelmed with sadness to see him go.

Father Allmound continued: "We're commending him to God and asking for everybody's prayers for him and for everybody who is grieving."

In a statement issued by the Bishop, Gabriel Malzaire, he deemed the passing of Father Jacky a "great loss."

The Bishop added: "We also sympathise with his family in Haiti and the Haitian community here in Dominica. Fr. Jacky was loved by many and will be greatly missed. May his soul rest in peace."