Father Patrick Anthony: Destroying the environment by what we eat 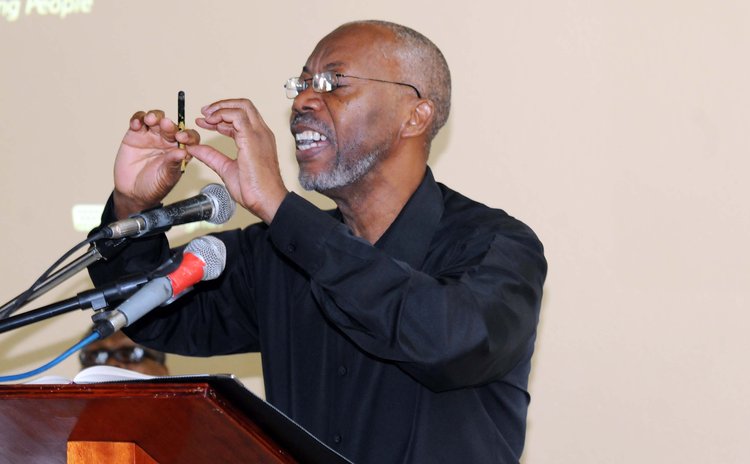 Speaking in a slow drawl and sometimes d-r-a-g-g-i-n-g out his words for emphasis, a speaking style that had young school girls gathered at the Goodwill Parish Hall giggling, Monsignor Patrick Anthony, a popular St. Lucian priest, said the world's people were slowly but surely destroying the planet because of the types of food that they eat-more specifically, the process of producing these foods is damaging the environment.

"Do you know what you are eating?" he asked.

Father Anthony spoke as part of a panel discussion on the environment at the Goodwill Parish Hall recently. The discussion was part of a meeting here by the Catholic clergy of the Arch-diocese of Castries. The discussion focused on Pope Francis's Encyclical on the Environment titled Laudato Si ("Praised Be"); an encyclical on climate change and justice to "enter into dialogue with all people about our common home- the earth.

During the discussion, Fr. Anthony said the population of the Organisation of Eastern Caribbean States (OECS) spend US$480 million on imported foods per year and eat lots of bread.

"There's something in bread called wheat germ, w-h-e-a-t g-e-r-mmm," Father Anthony intoned. "That wheat germ which contains natural oils but gives the bread its true wholesome flavour, which makes it nutritious, but for bread to last, it has to be extracted because, you see, it causes bread to rot within one day."

Father Anthony said after extracting the wheat germ, in order to have long-lasting bread, makers of flour then have to put in flavour, texture, preservatives and additives-"to make it n-i-c-e".

One additive to flour is called E927, a synthetic chemical used in the manufacture of rubber and plastics.

What's more, the use of E927 (or Azodicarbonamide) in foods has been banned in the United Kingdom and in the European Union.

But the United States Food and Drug Administration (FDA) has approved the use of E927 "as a food additive in cereal flour and as a dough conditioner based on a comprehensive review of safety studies, including multi-year feeding studies". The FDA adds that it considers Azodicarbonamide "a safe food additive when used for the purposes and at the levels specified in the FDA regulations".

Nonetheless, the FDA believes the use of the food additive "as whitening agent and dough conditioner is not necessary to make bread and there are alternative ingredients approved for use available".

"After two days broccoli loses most of its nutrients," he said. "After one week broccoli has absolutely no food value. This is scientifically proven."

He added: "Can you imagine broccoli, that comes from California- picked, packed, shipped- gets to Dominica, gets on the shelf and then you buy it? You like what you eating?"

Father Anthony said monoculture production of crops and livestock where large acreages are utilized for the production of soya beans and corn and then fed to large numbers of animals that produces methane in their excreta is destroying the world's environment. "So when we buy our food in the supermarket we are contributing to climate destruction," Father Anthony said.

He used the example of the banana industry in the Windward Islands that utilized planes to spray chemicals to control pests and diseases.

"After a while we couldn't find spiders anymore, and jack Spaniards anymore and butterflies anymore," he said. "And our water systems became polluted because of the banana monocrop."

He suggested that in the past when backyard gardens were more prevalent, we ate better quality foods.

What then can we do?

"We must study, we have to research, we have to inform ourselves," Father Anthony said. "Inform yourself about what you are eating, where it comes from, how it is produced. When you understand that you will then become a much more independent eater, a much more sensitive citizen, helping to protect your environment rather than contributing to the global destruction of our environment."