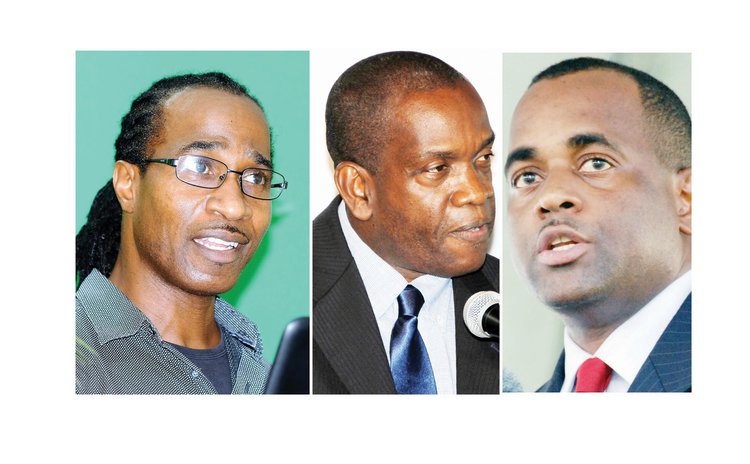 Opposition parties want Government to delay passage of the 2018 Anti-terrorism Act; they say the Bill must state exactly what Government means by terrorism

An impending law to criminalize terrorism to be presented to Parliament this week has generated concern among the political opposition; they say that the government is stealthily trying to introduce legislation aimed at curtailing legitimate anti-government protests and demonstrations.

That issue exploded into the public domain last week when Daniel James, the Clerk of the House of Assembly distributed documents, including the relatively hefty 2018 Anti-terrorism Bill, for the meeting of Parliament scheduled for 25th June 2018.

Apparently, after receiving the documents and without a thorough assessment of the Bill, opposition leader Lennox Linton warned radio listeners of Q95FM that the Roosevelt Skerrit administration was about to introduce a Bill in parliament that could limit the constitutional rights of Dominicans.

Linton said the Anti-terrorism Bill did not contain any clause that spelled out in the definition of terrorism that legitimate acts of protests and demonstrations was not terrorism.

Subsequently, Seniour Counsel Anthony Astaphan, the spokesman for the ruling Dominica Labour Party (DLP) said on State-owned DBS Radio that Linton was against the Anti-terrorism Bill because he wanted to keep "his license to incite his supporters to block the Salisbury road and to carry stones (to throw) at the parliament" and, Astaphan added, the only reason that Linton is opposing the Bill is that "he wants to continue to incite violence with impunity."

But a day later Linton apologised for his failure to read the Bill completely and to recognise that the Bill did indeed contain such exemption at Section 2 of the Bill.

"Since our discussion yesterday," Linton told Matt Peltier of Q95 "we are now satisfied that one of the main concerns we had about the Bill is satisfied in the provisions of the Bill at Sections 2/2".

Linton added: "Let me say this clearly and issue it with all the sincerity that I can and to apologise to those who have been misled by my omission yesterday acting out of a quick read that raised the red flags."

But that did not stop the politics and the accusations.

Astaphan, and later Prime Minister Skerrit, said Linton was forced to apologise because officials from the United States government called Linton to complain about his opposition to the Bill.

"I have a deep suspicion that somebody from the United States, either the State Department or the US Embassy must have called him," Astaphan said.

Saying he did not have any conversation with anyone from the US government before, after and during his apology, Linton categorically denied that claim.

"It is absolutely untrue," Linton said. "It never happened."

Adding its voice to the controversy, the Dominica Freedom Party (DFP) advised the Skerrit government to "refrain from having all three readings of the bill at the one seating of the Parliament carded for June 25th to give the public adequate time to understand the Bill".

In the release, Kent Vital, the DFP political leader argues that the Bill does not define "protest" and therefore that leaves room for the Act "to be used to subdue legitimate acts of protest by people who act in the defence of democracy, where these acts can be maliciously categorised as terrorism acts".

In its statement to the press, Linton's party, the United Workers Party (UWP) said it was "cautioning the Roosevelt Skerrit administration against using the necessity of anti-terrorism legislation as cover for the introduction of legal provisions to terrorize citizens exercising their constitutional right to dissent and protest against corrupt, incompetent government."

"We believe the Bill is in breach of fundamental rights and freedoms enshrined in the Constitution and if passed into law can cause any law-abiding citizen who is a freedom fighter to be targeted, searched, detained, prosecuted and convicted as a terrorist," the UWP statement said. "Indeed, anyone who stands against government policies could be deemed a terrorist and could face up to 25 years in jail".

But Prime Minister Skerrit told Kairi FM that the Anti-terrorism Bill "did not originate in Dominica and that it follows international conventions and obligations.

"If you ask my opinion I would say the Act of 1981 is more stringent in its language," Skerrit said. "This current Bill uses even softer language."

kerrit said on DBS News on Monday morning, before the Parliament is scheduled to meet, that he's amenable to suggestions that debate on the Bill should be postponed to allow more public discussion.