Felipe VI wants Spaniards to be proud of their king 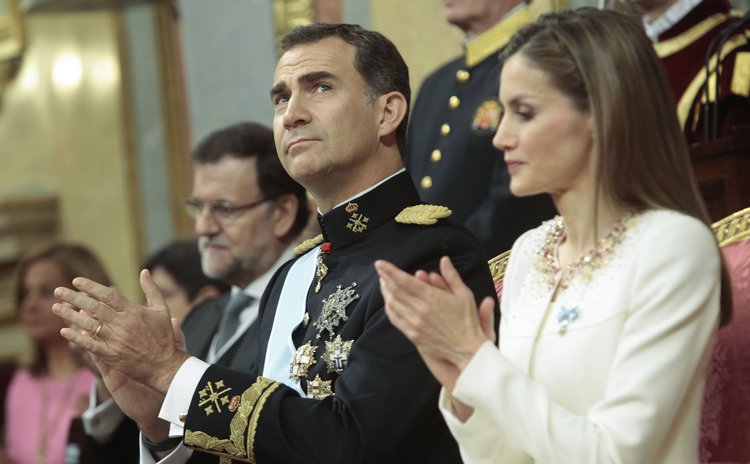 MADRID, June 19 (Xinhua) -- Spain's new King Felipe VI in his first speech on Thursday said he was very proud of the Spanish people and wanted Spaniards to be proud of their new king because of his work.

Addressing Spain's lower house of parliament, the new king paid tribute to his father Juan Carlos for his "exceptional reign."

"I want to thank a generation of citizens that built the foundations of a political building that overcame political differences that seemed insurmountable," Felipe VI said of Spain's transition to democracy in which Juan Carlos is thought to have played a significant role.

He also thanked his mother, the former Queen Sofia for her "dignity and hard work," adding he hoped to have his parents' expertise, support and care for many years.

Felipe was proclaimed as the new king of Spain after swearing loyalty to Spain's constitution on Thursday.

Members of the royal family were also present at the Spanish parliament, including his mother, sister Elena, Queen Letizia, the new Princess of Asturias Leonor, and her sister Infanta Sofia.

Former king Juan Carlos did not attend the ceremony, according to sources, to let his son be in the spotlight.

Felipe VI said he was a constitutional king who aimed to fulfil the duties the Spanish constitution with which he has been entrusted. "The parliamentary monarchy must continue to provide service to Spain," he said, adding that it represented stability and neutrality.

He defended the idea of "a new monarchy for a new era" and emphasized that the institution should look for closeness to citizens.

"Today, more than ever, citizens claim that moral and ethical principles inspire our acts," he said. "The king will be a leader in this regard," he added.

Felipe VI also remembered victims of terrorism and defending the unity of Spain. "Our diversity reinforces us, it is recognized by the constitution," he pointed out.

The new king will have to contend with a separatist movement in the northeastern region of Catalonia, which aims to hold a referendum on independence next November.

At the end of his speech, he said thank you in Spanish, Catalan, Basque and Galician, all different languages spoken in Spain.