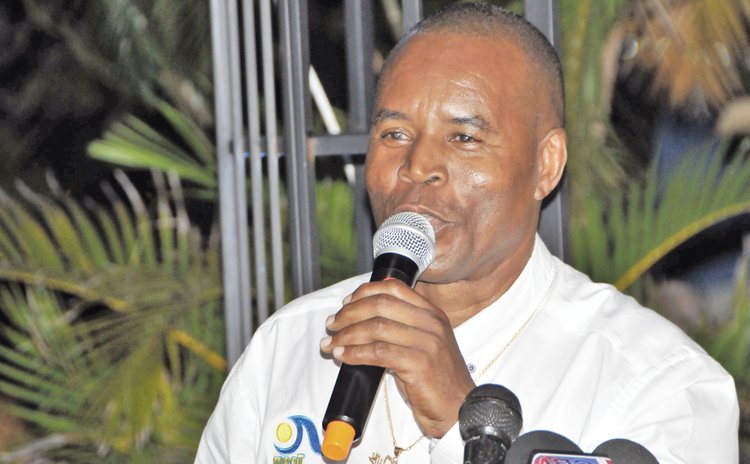 The late Felix Henderson at an Astaphan promotion

Since he has been ailing for some time, his death, though shocking to his fans and family, was not unexpected.

As his colleague the former programme director at the Dominica Broadcasting Corporation (DBS Radio) Shermaine Green-Brown said in a tribute to Henderson he received his flowers before he died.

Over the past few weeks, there was a virtual blitz of Felix Henderson communication on radio and social media after news broke of his illness due to a failing heart. A radio thorn on Q95FM raised several thousands to cover his medical expenses.

"Felix Henderson is one of the most respected and revered radio personalities in Dominica," writes prolific Dominican author and Canadian Judge, Dr. Irving Andre in the introduction to "Because You Are With Me", Henderson's autobiography published just weeks before he died. "For over four decades, his widely recognizable voice and infectious humour have provided comfort to tens of thousands of listeners whether in Dominica, within the Eastern Caribbean or throughout the world."

In the 173-page book Henderson writes about growing up in Grand Bay, the south eastern village widely touted as the cultural capital of Dominica where Kwéyòl was, and still is, the "official" language, so to speak.

Henderson grew up in extreme poverty. His family was "very poor" but his house and yard was spotless and the family was forced to use the neighbour's toilet and bath.

"Recess at school was begging for a piece of coconut, a peg of orange, a gwob of mango or kilim (milk powder) and sugar," he writes. "But I was determined to do well at school."

"Going to the Dominica Grammar School was a big thing in those days and I remember saying to myself, yes, even if I die today I went to DGS!"

But attending secondary school in Roseau was extremely difficult for young Henderson after his mother fell ill (his father had migrated to England). He was all alone.

"I had to wash my own clothes, most times had absolutely nothing to eat, my shoes were getting worn out with holes underneath and at the front like a frog's mouth, my clothes too tight, not because I was getting fat but because I was getting taller, and I didn't have money for transportation," Henderson wrote. "I went to DGS for a whole term and then the full next year with no breakfast".

The pressure from poverty forced him to give up school at Form Three.

"I couldn't continue," he said.

In 1977 he got the break of his life when he responded to an advertisement for an announcer on DBS. Not only did Felix Henderson get the job, he was employed there for the rest of his life, for the next 43 years, until his death last week.

Throughout his career in broadcasting, Henderson was Mr. Kwéyòl for which he received 20 awards including the nation's second highest award, the Sisserou Award of Honour.

"For all these awards, by faith I now present them to my Lord and Saviour Jesus Christ and lay them at his feet…" Henderson wrote.

In "Because You Are With Me" he writes with admirable simplicity, with the candor of a person knew he did not have much time left here on earth.

"Yes the spirit shall leave that body and all those who come to your funeral shall leave you in that cemetery and go right ahead to enjoy their Happy Hour," he wrote.

To his many children- ten listed at the end of the book (Fixton, Grace, Janelle, Al, Shannia, Joann, Janna, Allan, Yannick and Michelle)- Dominica share's your grief- your Dad definitely made a significant contribution to the development of Dominica through the Kwéyòl language.