Fencing on the move 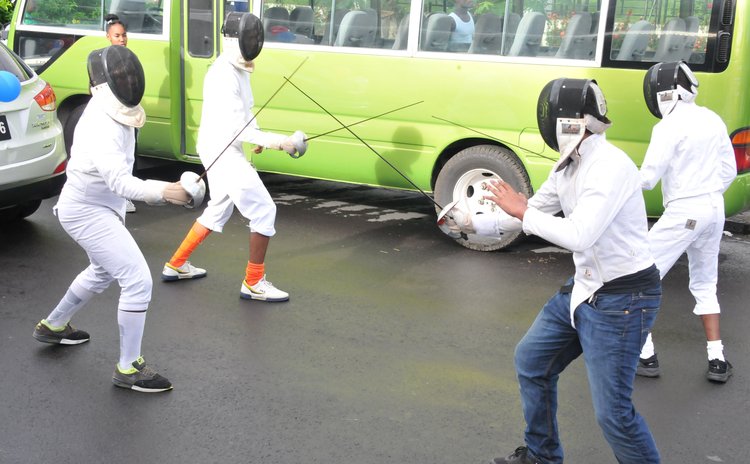 Demonstrating the art of fencing during the opening of carnival 2019

If you have always been interested in making fencing your sport of choice but you didn't know how and when and where to start, here's your golden opportunity.

On 16 September 2020, the Dominica Fencing Association (DFA) will be holding its annual fencing competition at the Goodwill Parish Hall from 9.00 am to 4.00 pm.

That's whole day of fencing! At the event the DFA will grade fencers and the winners will be awarded trophies and medals.

DFA's has a membership of 12-15 and hence their current membership drive. During the competition juniors and seniors will battle each other for top positions in fencing in Dominica.

By the way, the fencing that you'll see at the Parish Hall is nothing compared to what you see on TV in films like Zerro.

"Fencing is very, very safe," said Boycott Yankey, the DFA secretary in a short interview with the SUN.

By the way, the Yankey family is at the vanguard of fencing in Dominica. Boycott Yankey's wife is the treasurer and his stepson is the coach and president.

Asked whether Dominica is looking forward to a fencing medal at some Olympic Games in the future, Yankey said: "You never know. We have a few young guys who are very good." And although Yankey, a police officer, just began fencing a few years ago he says his enthusiasm for the sport has grown tremendously.

But what is fencing?

"Despite having roots based in swordsmanship, fencing is a modern Olympic sport that has grown from its historical genesis. Fencing takes place between two competitors, and is largely based on striking your opponent with a blunt weapon while avoiding being hit yourself. There is a significant breadth of rules that govern when and how hitting an opponent scores a point that varies between the three weapons: Foil, Sabre, and Épée. This creates unique strategies for each weapon and little crossover of style between the three disciplines", writes Jason Rogers in "BETTER FENCER".