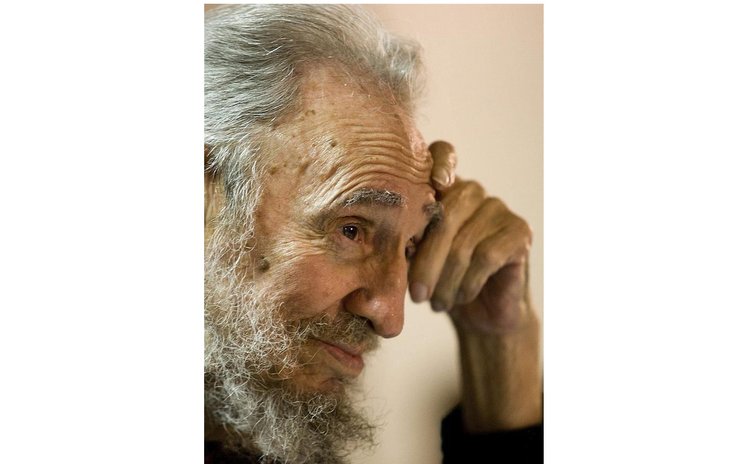 Image dated on Feb. 10, 2012 provided by Cubadebate shows Fidel Castro smiling during a meeting with intellectuals from 22 countries, mostly participants of the 21st International Book Fair, in Havana

HAVANA, Aug. 13 (Xinhua) -- Cuba's revolutionary leader and former president Fidel Castro turns 90 years old on Saturday as a symbol of historic resistance against the U.S. and upholding the socialist values that have led this Caribbean nation to unprecedented development for a third world country.

Considered one of the most respected, admired and controversial leaders of the 20th century, Castro is now out of the public eyes after leaving office in 2006, but is still very present in the daily lives of Cubans.

Fidel Castro was born into a wealthy family on Aug.13, 1926 in the town of Biran in northeastern Cuba.

He attended private schools in the eastern city of Santiago de Cuba and the capital, and in 1945 entered the University of Havana to study law. He graduated five years later but was already one of the island's most renowned figures.

During this period, Castro was actively linked to student protests and acquired political awareness that led him to develop anti-imperialist revolutionary ideas, closely related to Marxist values.

After the coup perpetrated in 1952 by dictator Fulgencio Batista, Castro organized and trained 100 young revolutionaries and on July 26, 1953, they attacked the Moncada military fortress in Santiago de Cuba.

The action was a military failure and Fidel was sentenced to 15 years in prison, of which he only served 22 months because of a presidential pardon in May 1955. He returned to freedom as a result of strong pressure and popular campaigns.

His self-defense plea, better known as "History Will Absolve Me", became a much circulated document and projected him as a leading figure of a revolutionary movement.

After his release from prison, he founded the July 26 Movement and later on fled to Mexico to organize an armed insurrection.

There he was joined, by his brother Raul Castro and other prominent revolutionaries, such as Ernesto "Che" Guevara and Camilo Cienfuegos, who trained for a year until December 1956, before returning to Cuba in the Granma yacht expedition with 82 men aboard.

Castro sailed to the shores of eastern Cuba where he was attacked by Batista's soldiers. Only a few of his men managed to regroup and head on to the Sierra Maestra mountains to continue the revolutionary struggle, thus giving birth to the Rebel Army.

The rebels began to grow stronger and gained popularity as war began to rumble.

In 1958, the revolutionary movement decided to speed up the war, opening new guerrilla fronts in other mountainous areas of eastern and central Cuba.

After defeating Batista's elite troops in central Cuba, on Jan. 1, 1959, the dictator fled the country and the revolution led by Fidel Castro triumphed.

A month later, he took over as prime minister and became the main political figure of the emerging revolution, which enjoyed strong popular support, especially among the poor.

Fidel undertook a series of changes such as land reform, a nationwide literacy campaign, the expropriation of American companies, and the nationalization of sugar factories, plants, banks and oil refineries, among others.

Fidel also directed and participated in all actions undertaken to defend the newly won sovereignty and proclaimed Cuba a socialist country, particularly after relations were broken with the U.S.

He led the struggle against a mercenary invasion organized by the Central Intelligence Agency of the United States in April 1961 at the Bay of Pigs in southwest Cuba.

He commanded other critical moments of the socialist struggle, such as the Missile Crisis of 1962, when the world was on the brink of nuclear war between the U.S. and the Soviet Union, as well as the so-called Special Period of the 1990s after the fall of the socialist bloc in Eastern Europe.

Since the triumph of the Revolution and throughout the past five decades, Fidel has promoted and led the struggle for the consolidation of the revolutionary process in the Caribbean nation and its progress toward building a socialist society with its own features.

As First Secretary of the Communist Party of Cuba (PCC) and president of the nation, he worked to provide free education and healthcare to the people and develop sports, culture and science.

In addition, the Cuban leader was a pioneer in battling the current international economic order, particularly against the capitalist system, neoliberal globalization, foreign debt and exploitation of natural resources.

Between 1979 and 1983, Castro was President of the Non-Aligned Movement (NAM). During that period, he sent Cuban troops to support the liberation of several African countries, playing a key role in defeating the apartheid regime.

He was also an active promoter, alongside late Venezuelan leader Hugo Chavez, of the creation of regional integration mechanisms, such as the Bolivarian Alliance for the Peoples of Our America (ALBA) and the Petrocaribe energy alliance.

These agreements have allowed Cuban medical, educational, sporting and cultural staff to work in more than 120 nations around the globe.

On July 31, 2006, after attending a summit of the Southern Common Market (Mercosur), Fidel Castro had to undergo complex surgery that removed him from office, but not before temporarily passing his duties on to his brother, Raul.

Subsequently, in February 2008, the historic leader of the Cuban Revolution presented his final resignation due to health problems and began a new stage in his political life, marked by the publication of his famous articles.

His public appearances have decreased over the years but his return to public prominence this year came on April 19 at the closing session of the PCC's 7th Congress.

"Soon I will be turning 90 years old. I never imagined it...It was purely a whim by destiny. Soon I will be like everyone else. Everybody will get their turn. But the ideals of Cuba's Communism will remain," he said at the session.

Although it's been 10 years since he left office, Castro continues to be an inspiration for Cubans, influencing important and strategic decisions of the Cuban Revolution, as it undergoes economic transformations and reforms to update its economic model.