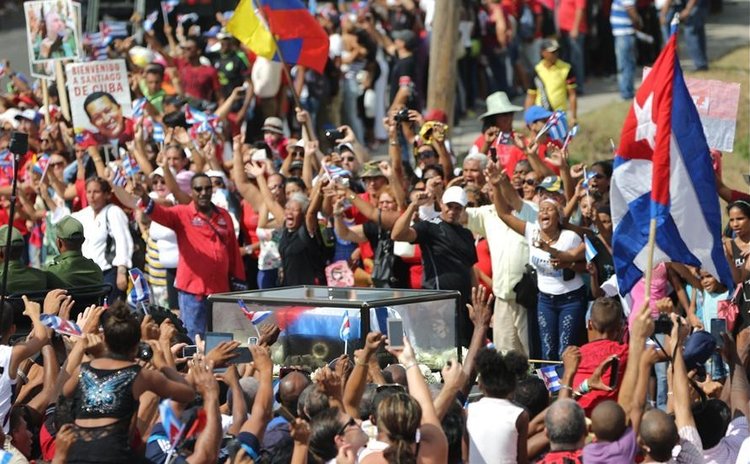 At 9:45am, the public was allowed to briefly visit his tomb, guarded by a dozen soldiers.

His final resting place is very close to other national heroes, such as Jose Marti, Carlos Manuel de Cespedes, and Fidel's comrades from the revolutionary struggle.

Thousands of people waving Cuban flags bid farewell to Castro while crying out "I am Fidel", during the passage of the car bearing with his ashes along the local Avenue Patria to the cemetery.

After a 21-gun salute, soldiers dressed in white gala uniforms and bearing black armbands carried the cedar-wood urn, covered by the Cuban flag, for the final stretch.

Fidel's brother and current President, Raul, placed the ashes inside the tomb.

Fidel Castro died on November 25 at the age of 90. The government decreed nine days of national mourning.

The funeral honors began with a popular tribute and a massive rally at the Revolution Plaza in Havana, attended by thousands of Cuban and heads of state from around the world.

On Wednesday morning, the caravan carrying the ashes of the leader left for a journey across the country, and reached Santiago de Cuba on Saturday, a city considered to be the cradle of the Cuban revolution.

Hundreds of thousands of people lined the route across Cuba, often waiting for hours in heavy rain or beating sun, many bearing flowers, flags, and photos of Castro, or having his name written on their faces.

During a ceremony on Saturday night in Santiago de Cuba, Raul Castro disclosed that Fidel had insisted that no public institutions or places be named after him and that no monuments or statues of him be erected.

"The leader of the Revolution rejected any form of a cult of personality and was consistent with that attitude until the last hours of his life," said Raul.

He added that at the next session of the National Parliament in December, the government will present the legislative proposals required to comply with Fidel's wishes.