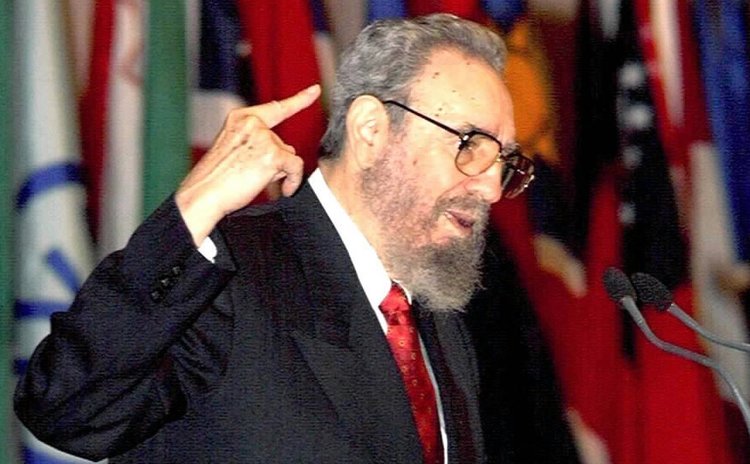 Image taken on April 12, 2000 shows Fidel Castro addressing the opening of the first South Summit in Havana, capital of Cuba

CARACAS, Aug. 10 (Xinhua) -- As revolutionary leader Fidel Castro nears his 90th birthday on Aug. 13, the international spotlight has once again turned towards Cuba, the nation he shaped into one of the Caribbean's most developed in terms of education, healthcare and life expectancy.

Historians and political observers are taking stock of Castro's lasting legacy and the impact of his policies on Latin America and the world.

"His accomplishments are important to the achievements of the Caribbean, Latin America and the world," said Britto.

Since appearing on the world stage in the 1950s, as leader of Cuba's revolutionary movement to topple U.S.-backed dictator Fulgencio Batista, Castro has presented the world with a larger than life figure to be contended with.

"From the beginning, Fidel put his life on the line for the revolution," despite his relatively well-off background, noted Britto, winner of the 2001 National Literature Prize.

That he gave up a life of comfort to spearhead a revolutionary movement to better the lives of average Cubans makes his historical contributions all the more remarkable, he said.

Castro was born in 1926 as "the son of a wealthy farmer, which would have been enough for him to lead a comfortable, easy, pleasant life, but Fidel... decides to live a life of struggle and of fighting for the community, for the people," said Britto.

After initially failing to drive Batista from power, and serving less than two years behind bars as a result, Castro and his rebels finally succeeded in 1959, marking the beginning of one of the most profound national transformations in history.

Under Castro, Cuba evolved from a tropical playground for its northern neighbor with an economy under the yolk of the U.S. government, to an independent nation with "very high human development" on a par with many richer nations, according to the United Nations Development Program.

Not only did Castro succeed in vastly improving living standards across the board, said Britto, but he did it a mere 145 km from the United States, a superpower and declared enemy of Castro's government.

"Fidel achieved what seemed impossible for the rest of Latin America: healthcare and jobs for everyone, important accomplishments in the area of culture, (such as) exceptional filmmaking, and the development of a great network of scientific research," said Britto.