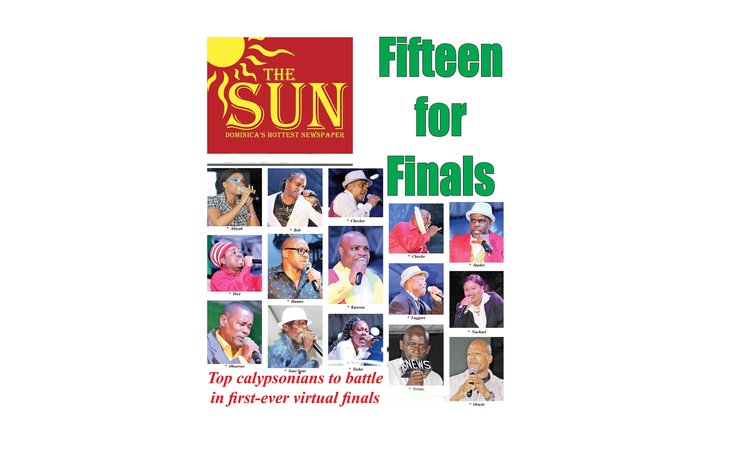 Front Cover of the SUN showing 15 Calypsonians in 2021 Finals

There was an unusually small crowd for a Calypso semi-finals- but fans who made it despite COVID-19 released some stress, laughed and had a drink, or more, as 30 calypsonians performed in the first ever virtual Calypso semi-finals show at the Old Mill Cultural Centre at Canefield on Saturday night.

In the end the show produced three women among 15 names for the first-ever Calypso finals slated for February 13, 2021 at the Old Mill.

Held under protocols dictated by the Ministry of Health because of COVID-19, fans at the show saw 30 competitors sweating it out in the cool night.

At the end three women, Tasha P, Abiyah and Nachael will be at the finals. Back in the competition is Jerry "Oracle" Lloyd who impressed with his song "Help Me",

In addition, the veterans are there in their numbers: King Karassah, Observer, Jaydee (the 2020 Calypso Monarch), Checko, Bobb, Logurz, Hunter, Dice, and Checker. The rest of the lineup includes Sour-Sour with his popular number "Hit Man" and Gaiel "Trinity" Registe with "Open Borders."

Meantime, Narrin Murphy, Treasurer of the Dominica Calypso Association (DCA) said that despite a few hitches, the live stream virtual show was "satisfactory."

An unknown number of people attended on the internet.

"We don't have the actual numbers. The net gave us some issues but it was satisfactory and we are looking to beef things up for the finals…it's a noble effort by the DCA and people need to appreciate that and help us along the way," he said. "We are a responsible organization and will do what we have to do in a professional manner for the safe guard of all. We want to also thank our many sponsors working with us and is calling on those who are still thinking of coming on board to do so now."

Murphy said the virtual show as "a bold initiative" by the DCA with the objective of breaking even, at the minimum. But he took issue with some people at the show who decided to use their Facebook account to stream the show thus undermining the efforts of the DCA.

"This is unfair and you are not helping us and the art form. We need people to support our cause to keep the art form alive. We could have canceled the Calypso event but we know that Calypso is therapy and so decided to try something. So please help us, support us as we trying to make it happen. It's not business as usual," he said.