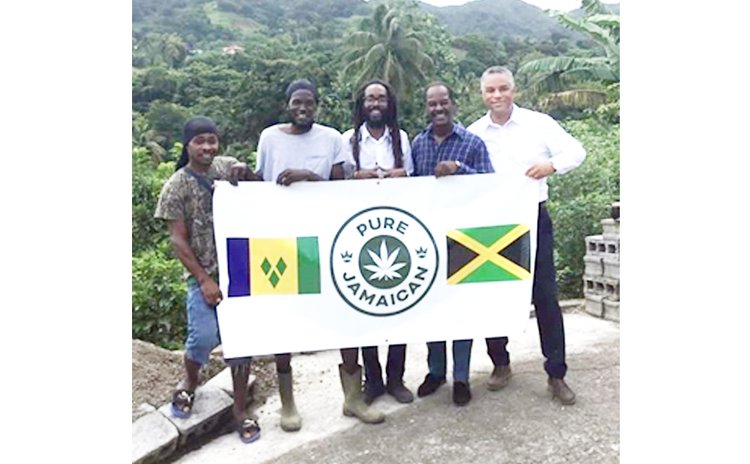 SEPTEMBER 21, 2021 – Kingstown, Saint Vincent, and the Grenadines – The Pure Jamaican group of companies (Pure Jamaican), has donated 10,000 premium, award-winning, feminized cannabis seeds to the CARICOM member state of Saint Vincent and the Grenadines (SVG). The philanthropic gift is in response to the damage caused by the La Soufrière eruption which devastated the germplasm of licensed traditional cultivators in SVG who were located in close proximity to the volcano.

Dr. Jerrol Thompson, Chief Executive Officer of SVG's MCA remarked, "The Medicinal Cannabis Authority (MCA) of Saint Vincent and the Grenadines graciously accepts these high-performance feminized seeds, on behalf of the Traditional Cultivators of SVG. Many of the varieties and landraces which existed in SVG were destroyed by the eruption of La Soufrière. One of these landraces had originated from Jamaica. This donation not only helps to rehabilitate the livelihoods and production capacity of these farmers, but it will also improve the quality of the seeds as planting material specially designed for a tropical setting. May this historic and generous donation inspire even greater cooperation and serve as an example to the world."

The seeds were produced under an R&D initiative spearheaded by Pure Jamaican's Gi Life Farm and Master Grower Ed Rosenthal, Benjamin Lind of Humboldt Seed Company, and Dr. Machel Emanuel, Principal Investigator of the Life Science Cannabis Research Group at the University of the West Indies. The donation was presented to MCA by Mr. Robert Wright, Director of Pure Jamaican and Chairman of the Gi Life Foundation.

Mr. LeVaughn Flynn, Chairman of Jamaica's Cannabis Licensing Authority (CLA) said, "I'd like to commend Pure Jamaican and Gi Life for the contribution of premium seeds to the cannabis community in SVG. SVG has a strong tradition of cannabis cultivators, and its very existence was threatened by the recent volcanic eruptions. This donation is a strong statement and signals unity. It will be part of SVG's rebirth as it looks to carve its niche in the global cannabis industry."

Added Dr. Machel Emanuel, "This is a true humanitarian gesture by Pure Jamaican to offer clean cannabis planting material in the form of feminized seeds of various cultivars that have been stabilized and bred for high THC production in an equatorial climate. This donation is also the first step in establishing the Caribbean cannabis economy where cannabis can cross-regional jurisdictions legally."

Ms. Diane Edwards, President of Jamaica Promotions Corporation (JAMPRO) remarked, "We are thrilled to work with the Pure Jamaican group of companies in this effort to stimulate growth in SVG and the CARICOM region. Pure Jamaican and Dr. Machel Emanuel have extremely high standards for modern botanical cultivation. We also hope this is of great economic benefit to SVG."

Pure Jamaican Co-Founder and CEO Scott Cathcart said, "We are honoured to be able to assist SVG in re-starting their medical cannabis industry. The world is increasingly discovering the gifts that cannabis can give, and we hope this gift of premium genetics can not only help produce medicine for patients in SVG but also lead to tremendous economic opportunity for the country."