Fisheries Complexes Updates: Fisherfolk Will Have to Wait for a Little Longer 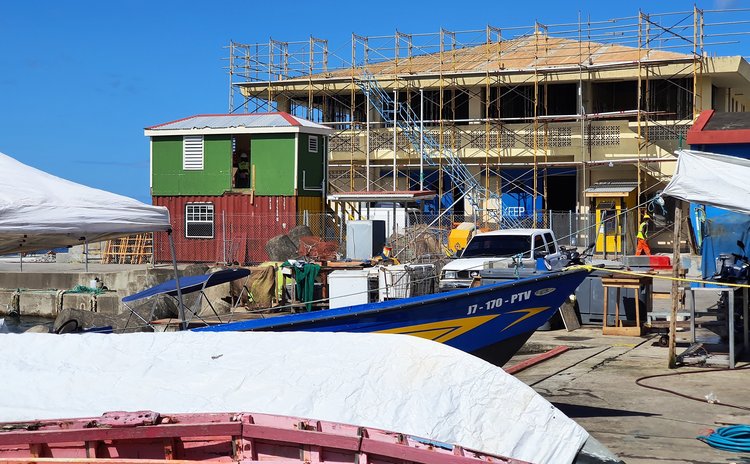 August 2022 is the new deadline for the fishing industry to return to its pre-Maria level of activity.

The category 5 hurricane dealt a near-death blow to the Roseau and Marigot Fisheries Complexes which played a pivotal role in the fisheries sector.

The loss of these facilities, which were a gift from the government and people of Japan, created unnecessary hardships on fisherfolk, who would have to sell fish cheaper, and spend less time on the sea because there was no ice to store their catch.

As Chief Fisheries Officer, Julian Defoe, told The Sun, ice production had dropped significantly, but mitigating measures had been adopted to alleviate the plight of fisherfolk.

"At the Roseau Fisheries Complex, we had production of about ten tonnes of ice per day. 24 hours. We had storage capacity for maybe 30, 40 thousand pounds of fish," Defoe said.

Dominica's export of fish had also declined noticeably in the absence of the fisheries complexes and the inability to produce ice and do post-catch harvest practices. The country produced on average 1,000 metric tonnes of fish prior to Hurricane Maria. In 2017 this dropped to 706 tonnes and gradually rose over the years to surpass 800 tonnes by 2020.

Despite the increased quantity of fish being caught, Defoe says it will be impractical to return to normal export levels at this time.

"We do not think it would be prudent at this time to put measures in place to increase production when we do not have the facilities to handle that additional catch and take care of postharvest," he said.

He also cited other missing infrastructure such as tools and equipment lost by fisherfolk which are yet to be replaced. Under the Emergency Agricultural Livelihoods and Climate Resilience Project, EALCRP, 108 engines have been provided to fisherfolk while the restoration component is ongoing which will see the production of boats by early to mid-2022.

In May 2021 a 27-million-dollar contract was signed with Nitto Seimo Construction Ltd in Japan for the rehabilitation of the Fisheries Complexes.

"As we speak works have officially begun so work is in full implementation now. The company Nitto Seimo Co. Ltd contracted a local company as their prime subcontractor so Oyo Construction is the subcontractor," Defoe said.

The fisheries complexes not only provided services for the fishing industry. The Roseau Fisheries Complex also housed the office of the Fisheries Division. The Chief Fisheries Officer says barring any extreme circumstances, the rehabilitation of the buildings should be completed by August 2022.

"The project's estimated time goes from 31st May 2021 to 31st August 2022. However, I feel we are fairly confident that the project will be finished ahead of schedule based on the implementation plan of the contractor," he said.

In October 2019, an EC$27 million contract was signed between the governments of Dominica and Japan for the restoration of the Fisheries Complexes. Work was initially set to begin in January 2020 but began in May 2021 due to the COVID-19 pandemic. That first phase of works included the removal of unwanted items and cleaning up of the facility. At that time the renovation was expected to be completed within ten to 12 months. However, further unforeseen delays meant this was not the case.

Defoe says fisherfolk were naturally upset at the situation because it was impacting their livelihoods. Despite the previous setbacks, the Division has been giving fisherfolk ball-by-ball reports on the situation so they are all on the same page.

"In terms of our conversation with them [the fisherfolk] regarding the delays they have been very understanding especially the fishers at the Roseau Fisheries Complex, the effect of COVID 19 is understood by everyone," Defoe said.