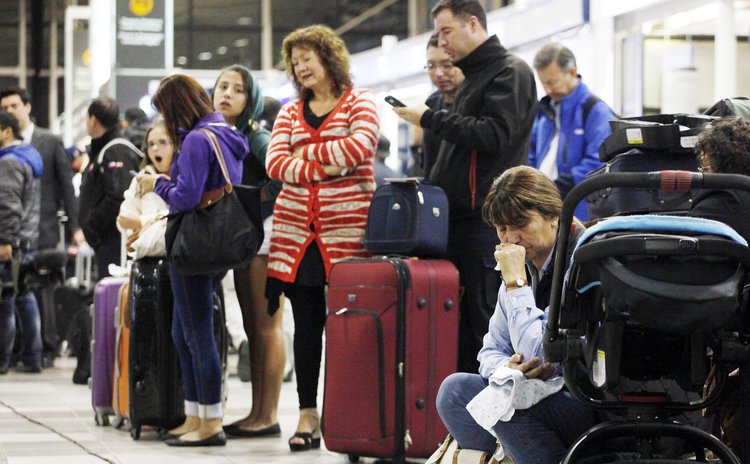 SANTIAGO, April 2, 2014 (Xinhua) -- People wait at the Arturo Merino Benitez Airport as flights are cancelled following an earthquake in Santiago, capital of Chile, on April 2, 2014.

SANTIAGO, April 2 (Xinhua) -- An 8.2-magnitude earthquake hit off the northern coast of Chile Tuesday, leaving five people dead and three severely injured, while thousands of people have been evacuated due to a tsunami alert.

Interior Minister Rodrigo Penailillo said the deceased had been crushed to death or suffered a fatal heart attack.

The University of Chile's Seismological Service said that the powerful tremor struck at 8:46 p.m. local time (2346 GMT) and the epicenter, at a depth of 44 km, is located 99 km northwest of the mining port of Iquique, near the Peruvian border. However, according to the U.S. Geological Survey, the quake was shallow at 20.1 km below the seabed.

The Chilean National Office for Emergency said more than 10,000 people in some areas along the country's Pacific coast have been evacuated as a result of tsunami waves triggered by the quake.

The Pacific Tsunami Warning Center said the quake generated a large tsunami with the biggest wave reported at 2.3 meters, while the Chilean navy said tsunami waves have hit some coastal areas.

Hours later, the tsunami warning remained in effect for northern Chile, but alerts were lifted elsewhere.

Li Jiaoyun, consul general of the Chinese Consulate General in Iquique, told Xinhua that shortly after the quake, local authorities ordered locals to move to safe areas in case of a tsunami.

Li also said there have no reports of any Chinese being injured or missing.

Local radio reported that power went out and communications were affected in some areas of northern Chile where landslides blocked some roads and highways.

Iquique is a key port, close to Chile's main copper mines. Mining in the world's No. 1 copper producer do not appear to have been significantly interrupted so far.

The emergency office also said 300 inmates escaped from a women's prison in the city of Iquique and the military was sending a planeload of special forces to prevent looting.

Xiao Feng, vice consul of the Chinese Consulate General in Iquique, also told Xinhua that the quake was so strong that a lot of office equipment was knocked down.

At least 10 strong aftershocks, including a 6.2 tremor, have occurred since the quake.

Early Wednesday, President Michelle Bachelet declared northern Chile a disaster area, saying she would travel to the region and send military officials to the areas to prevent looting and disorder.

In a related development, the Hawaii-headquartered Pacific Tsunami Warning Center said in a statement on Wednesday that "based on all available data, a major tsunami is not expected to strike the state of Hawaii."

However, sea level changes and strong currents may occur along all coasts that could be a hazard to swimmers and boaters as well as to persons near the shore on beaches and in harbors and marinas, said the statement.

The warning center also said the initial wave from the earthquake in Chile is expected to reach Hawaii at 3:24 a.m. local time (1324 GMT) on Wednesday, adding that "the threat may continue for several hours" after the wave arrives.

According to Reuters, some schools were used as shelters, and classes were canceled in most of the country on Wednesday. LATAM Airlines said it had canceled some flights to and from Antofagasta, Iquique and Arica in northern Chile.

Chile is one of the world's most earthquake-prone countries. An 8.8-magnitude quake and ensuing tsunami in central Chile in February, 2010, killed 526 people.