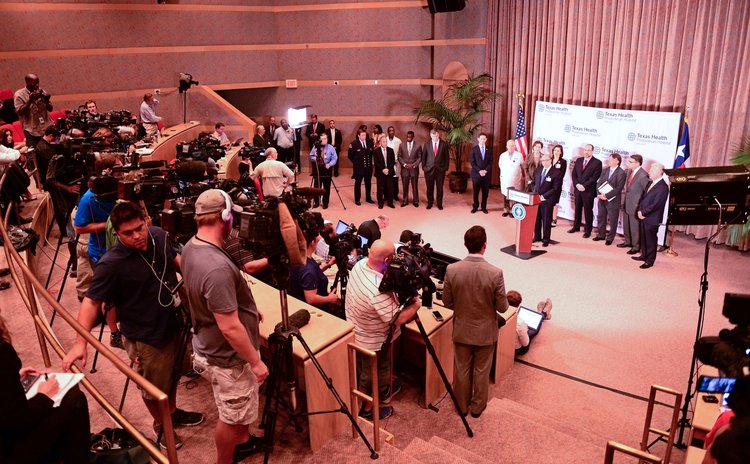 HOUSTON, Oct. 1 (Xinhua/Sun) -- Officials from the U.S. state of Texas confirmed on Wednesday that five students who had contact with the man diagnosed with Ebola are being monitored and the patient's condition had been upgraded from critical to serious.

At a press conference in the northern Texas city of Dallas, where the country's first confirmed patient with Ebola is receiving treatment at a hospital, Texas Governor Rick Perry said the students are now being monitored at home, according to local TV station Channel 2 Houston.

Dallas Independent School District Superintendent Mike Miles, who also attended the press briefing, said the students were in school this week after possibly being in contact with the patient over the weekend.

As a precaution, additional health and custodial staff will be at the five schools the students attend, Miles added.

To help local agencies deal with the case, the Centers for Disease Control and Prevention (CDC) will send a crew of infectious-disease experts to Dallas, where Mayor Mike Rawlings said Wednesday that an emergency operations center has been set up at the City Hall, in case it's needed.

The patient, who came from Liberia to see his relatives in the U.S., has been in isolation at Texas Health Presbyterian Hospital in Dallas since Sunday. He was reportedly in serious condition on Wednesday.

The patient, who was reportedly identified as Thomas Eric Duncan, had been released from the hospital late last week despite he told the hospital personnel that he was visiting from Liberia.

On Tuesday afternoon, Tom Frieden, director of the Centers for Disease Control and Prevention, confirmed the country's first Ebola Case, saying that the patient, who left Liberia on Sept. 19 and arrived in the U.S. on Sept. 20, sought medical help on Sept. 27 and was isolated in Dallas on the next day.

Frieden also said there would not be an Ebola outbreak in the country.

Ebola, which is spread via contact with bodily fluids, can have symptoms such as fever, muscle pain, vomiting and bleeding, and can appear as long as 21 days after exposure to the virus.

Ebola, which was discovered in 1976, has killed 2,917 people and infected 3,346 others since the outbreak in West Africa in March this year.