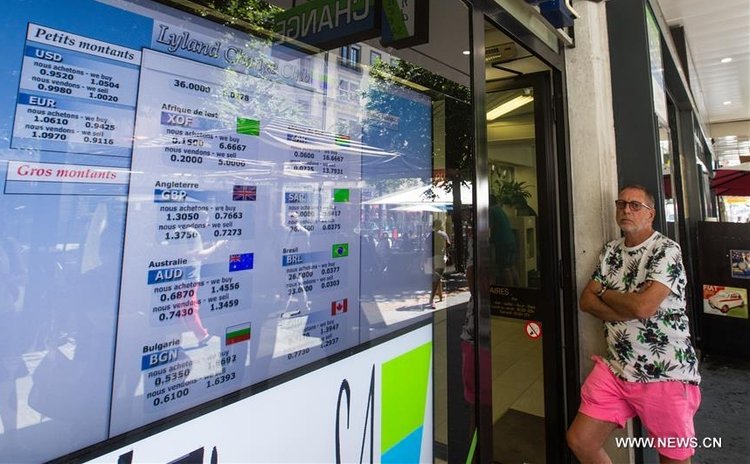 BEIJING, June 24 (Xinhua) -- The Leave camp won Britain's Brexit referendum on Friday morning by obtaining nearly 52 percent of ballots, pulling the country out of the 28-nation European Union (EU) after its 43-year membership.

The stunning referendum results sent global markets on a wild descent, and were seen by many economists as a threat to global economic stability.

The following are answers to five key questions on what economic impacts the landmark Brexit will bring to Britain, the EU as well as the global economy and financial market.

1. How will Brexit impact Britain's economy?

According to the latest predictions of the International Monetary Fund (IMF), a vote to exit the EU could leave Britain's economy more than 5 percent smaller by 2019 than if it stays in the 28-nation club.

"In the short run, the uncertainty generated by navigating a complicated and untested exit process could be damaging for investment, consumption and employment (in Britain)," the IMF said in its report.

According to research commissioned by employers' group the Confederation of British Industry (CBI), a British vote to leave the EU could cost the economy 100 billion pounds (137 billion U.S. dollars) and 950,000 jobs by 2020.

In an op-ed piece written for The Guardian on Monday, billionaire George Soros said that Britain leaving the EU would have disastrous effects on the British economy.

Soros used data from the Bank of England, the Institute for Fiscal Studies and the IMF, which calculated that the long-term economic consequences of Brexit would reduce annual household incomes by between 3,000 pounds and 5,000 pounds (about 4,110 to 6,850 dollars).

2. In what ways Brexit will affect Britain economy?

Analysts and economists said the Brexit would hit Britain's economy in three major ways, and the first one is the devaluation of sterling.

In the final quarter of 2015, Britain's current account deficit ran to 7 percent of the gross domestic product, the largest since records began in 1955. To sustain this, Britain relies on large inflows of foreign capital. However, if the investors providing those inflows were to go sour on Britain, demand for sterling would slump and the pound's value could plummet.

Soros predicted that the pound would be devalued by at least 15 percent -- and possibly more than 20 percent -- which would be 25 percent to 30 percent lower than the pre-referendum range of 1.50 to 1.60 U.S. dollars.

Ratings agency Standard & Poor's said that Britain's top-notch "AAA" credit rating is no longer tenable after voters opted to leave the EU, and rival ratings agencies Fitch and Moodys have already stripped Britain of their AAA ratings, long before the referendum campaign began.

Meanwhile, enterprises are likely to suspend or postpone their investment in the country as the Brexit would spell huge uncertainty for Britain's economy.

Finally, the Brexit will, from a long-term perspective, have a negative effect on the country's economic growth as it will result in a decrease in trade and investment as well as inflow of people from Europe.

3. How will Brexit impact EU economy?

Many economists said Britain's breakup with the EU could cause trouble for the rest of Europe.

The Washington-based think tank Peterson Institute for International Economics believes that the Brexit would cripple the EU's economic growth.

In a recent article titled "Divided we fall: a vote to leave the European Union would diminish both Britain and Europe", the Economist said that a vote to quit the EU would do grave and lasting harm to the politics and economy of Britain, and the loss of one of the EU's biggest members would gouge a deep wound in the rest of Europe.

4. How will Brexit impact global economy?

Authorities ranging from the IMF to the U.S. Federal Reserve and Bank of England warned that the British exit could reverberate through a world economy that is only slowly recovering from the global economic crisis.

The AP said in a report that a Brexit is a turning point, an event that snowballs and leads to much larger and nastier problems.

"It's reasonable to assume that a vote to leave would cause global financial market swings in the short term, with investors selling riskier assets such as stocks and seeking safety in government bonds," said the report, adding the pound has already fallen in value against other currencies and would likely fall more, and gold, seen by some as a refuge in troubled times, might rise.

Central banks could try to steady things with extra loans for banks or other ways of making credit more readily available. Market swings could help persuade the U.S. Federal Reserve to postpone interest rate increase once thought likely this year and now in doubt, said the report.

5. How will Brexit impact China's economy?

The Brexit would have only minimal impact on the Chinese financial market due to Chinese financial assets' limited exposure to foreign-born risks, despite immediate turbulence following the outcome of the referendum.

Market observers say that in the short term, a rise in the risk-averting sentiment across the globe is likely to dampen the Chinese stock market and increase depreciation pressure on the Chinese yuan as investors choose to buy in dollar-denominated assets.

However, China still has to brace itself for long-term fallout from the Brexit, given the two countries close links in trade and financial areas.

If Britain leaves the EU, China will have a more liberalized and open British market. But at the same time, losing Britain as a gateway to the EU, China may also have to face a higher level of protectionism in dealing with the bloc, said Cui Hongjian, a senior research fellow on European studies at the China Institute of International Studies.

In addition, Brexit could also affect the internationalization process of the Chinese yuan, since Britain has contributed quite a bit in recent years to the Chinese endeavour regarding its currency.

Leaving the EU will also dent London's status as a key global financial centre and that could possibly drag down the pace of the Chinese yuan to go global.