Jump Ball No. 54. By Arlington James 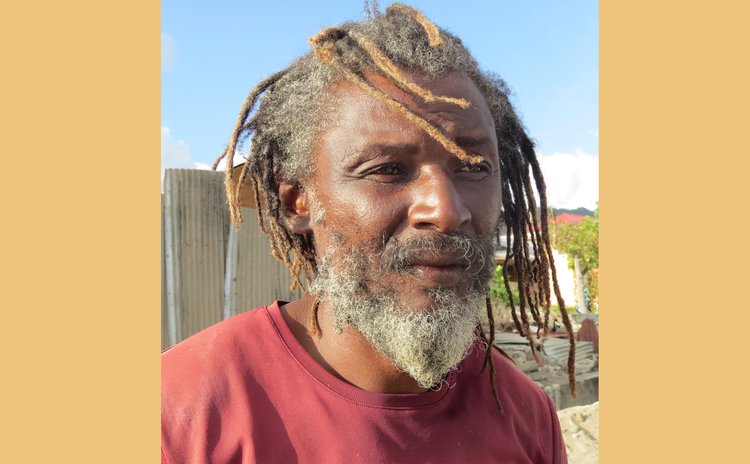 Fletcher Leblanc gave 30 years of his life to basketball

You might have played football with or against him while he was a right-back on Celtics, Gramacademites, J.D. Rocks, Potters or Blue Stars. Then, you may have been part of the Dominica contingent which he captained when Dominica participated in the CARIFTA Games in Martinique where he ran the 400 meters. And more recently, you may have gone net-fishing for 'balaw' with him, or even purchased some of his catch somewhere in Roseau or Balahou Town, i.e. Pottersville, where he was raised.

But more importantly, you might have also played basketball with or against 6' 1" Fletcher LeBlanc, or watched him from the stands playing, from the 1980s through to 2011 or thereabout.

In December 2017 Fletcher, his Dad Wilmoth and his two brothers Dion and 'Stevie' were featured jointly in Segment D of the Jump Ball article, 'Basketball In The Family'. Let's now meet Fletcher in his Captain's boathouse on Pottersville Beach.

Fletcher debuted in the National Basketball League in 1983 playing with St. Mary's Academy in the Intermediate Division. One of the teams that he high-scored against then was Sout' City Sixers, against whom he sank a reasonable 21 points.

This high-energy Small Forward, who would sometimes play Point Guard or even Shooting Guard, revealed that even while attending school in 1983, he was drafted by his Dad, a local basketball pioneer and a founding member of Cardinals, onto that legendary, record-setting team.

Fletcher, now 53 years old, would then go on to play continuously with Cardinals – minus one year – until the Cards' final season in 2004, making him possibly the individual who wore Cardinals uniform the longest, i.e. 21 seasons.

Surprisingly though, Fletcher never got to play with his Dad. However, he benefitted immensely from Willie's coaching and actually play against him shortly after joining Cardinals, while his Dad was a member of Owls. But he admits that it was a joy to play against his 'Ole Man'.

During his two stints with Cardinals he was often a high- or top-scorer. For example in 1985 he sank 20 Pts against his Dad's new team, Owls, and top-scored for Cardinals with 20 Pts versus Pros in 1987.

In 1988 Fletcher was the 3rd highest aggregate-scorer for Cardinals with 131 pts, and the 8th highest aggregate-scorer in the Division I League. Then in 1989 he sank the highest score in a League match, 35 Pts vs Flames, and that same year he topped the League with 137 aggregate points. Come 1999 two of his high- or top-scores were 24 and 20 Pts vs Hoyas and Blazers respectively.

The one season that Fletcher spent out of Cardinals was in 1997/98 when, as a Port Officer then, he teamed up with Cornel Bethel, Adolphus David, Roderick Deschamps, Roland Jean-Jacques, Irving Magloire and others playing with CUSPORT. One of his high-scores that season was 21 Pts, vs Clouds.

After Cardinals bowed out of existence Fletcher played with Stormers in the Intermediate Division, and finally with No Look in the Premier Division where he was still a high-scorer in 2011.

Over Fletcher's almost 30 years in competitive basketball, he proudly wore Dominica's colours on the Senior National Team for 15 years, from 1986 through 2000. During that time he represented Dominica in several editions of the OECS Basketball Championships, in the revived Windward Islands Tournament, at the CARICOM Basketball Championships in Trinidad and Barbados, and as a member of Cardinals in the OECS Champion-of-Champions Tournament. LeBlanc also represented Dominica in the basketball segment of the Caribbean Customs & Excise Tournament.

Fletcher captained Cardinals for a short while, and Dominica's national team for possibly seven years including the one that participated in the CARICOM Championships in Trinidad.

Hurricane Maria swept away all of Fletcher's trophies, but the awards that he had gathered over the years include MVP on Dominica's team in the OECS and Champion-of-Champions Tournaments; Dominica's MVP at the 1996 Windward Islands Championships; Highest Aggregate-Scorer Award in the local league; Best Defensive player in the local league and in one of the OECS Tournaments. He also twice placed second in Slam-Dunking Contests.

Fletcher admits that the teams that he enjoyed playing against the most were Pros and Blazers. He had more to say about his involvement in basketball, but it's time to go enjoy some fried 'balaw' rolls in a creole sauce.