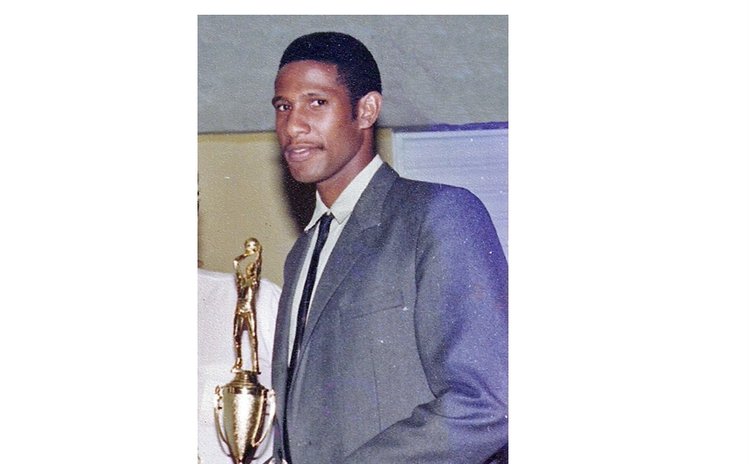 Johnny Daniel, after whom the FCBL Memorial Play-Off Match was named. At an All-Sports Promotion event.

Part III of the article concluded the presentation on teams from Fond Colé which participated in the national league from 1994 to 2000. It also presented on the playing of DABA Divisions II and II matches at Fond Colé, and on the first two editions of the Fond Colé Basketball League. The article concludes below.

Fond Colé Basketbal League (FCBL) [Ctd]: Johnny Daniel, a young Police officer by profession, met his untimely death as a result of an injury that he sustained while playing in a Division I match at the Windsor Park in 1992. Johnny played in the FCBL with Bad Boys, and was judged to be his team's Most Valuable Player in the first edition of that league.

Glenton Latouche in High Basketball Positions: There is a very popular expression used in Dominica these days, "Leadership is everything" and that is so true. Glenton Latouche, or "Glen", as he was popularly known, was a man that led from the front and was always on the move, so to speak, making his contribution to the development of basketball and other sports in his community, not as a player, but as an administrator.

As Chairman of the Fond Colé Basketball Committee one would find Glen organizing basketball leagues in his community and soliciting the generosity of sponsors, etc. In terms of basketball administration at the national level he also served as Vice-President of the Dominica Amateur Basketball Association for the association's 1992-1994 term of office.

Sad to say, Glenton went to the Great Beyond around 2006. But one can feel confident that up there on that extra-wide open court, he may have already organized a big match involving "Big Fish", "Boss Boy", "Carlty", Floyd, "Homo", Johnny, Milton, "Noche", "Toss", "Willo" and the other players who were subbed too soon on Planet Earth. And Glen would have found referees for that epic encounter.

Over in the Fond Colé Basketball League, the latter was initially jointly sponsored by Antilles Cement and P.H. Williams & Co. and subsequently only by Antilles Cement. The League also saw Glenco Traders sponsoring the Basketball Knockout competition as well as one of the teams in the league. Marpin TV had also sponsored the FCBL Ball-o-Rama.

REMARKS: Fond Colé did not field a team in either the Senior Division or the Women's Division of the national basketball league, and as a basketball centre fielded only six teams in DABA competitions. However, the community did make its contribution to Dominica's basketball development and to keeping the sport alive here.

As a basketball centre, Fond Colé compares not so favourably with some other centres as Grand Bay (17 DABA teams), Soufriere-Scott's Head (14) and Roseau Valley (12).

However, the Basketball Committee's well-organised leagues where all players, and even game officials, received tokens of appreciation (I still have my little trophy after all those years); the initiative to stage a Memorial Match in honour of a former player in the FCBL; the high-powered head-table officials for the opening of individual leagues; and the growing number of teams in the FCBL are all indicative of the contribution that Fond Colé made to keeping the sport of basketball alive on Dominica and contributed towards basketball development on the island.

I wish to acknowledge Dexter Honore, Miguel Hill, and Ronnie Gustave for their contributions. Statistical information sourced from archived newspapers.