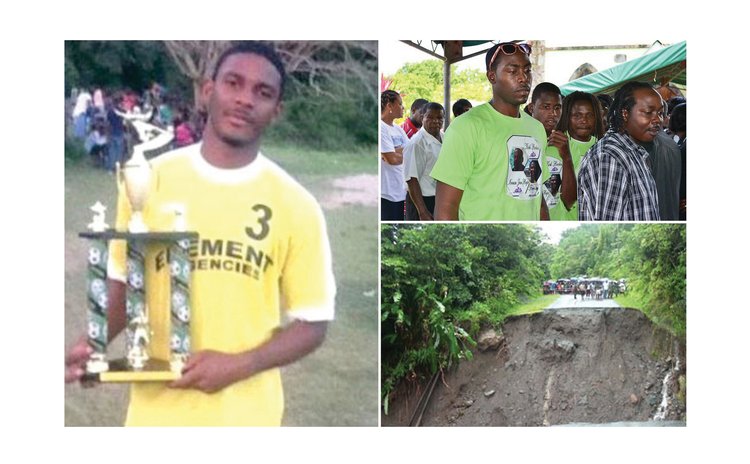 It's 19 April 2013. Joslyn Jean-Pierre Prince, Kurt Hector and Norran Jno Hope are getting set to travel to St. Vincent & the Grenadines for a football tournament.

They all jump into the SUV and they head for Roseau to join the remaining members of the Dominica team. They're chatting, listening to music, driving in the rain. They've reached Pond Casse without incident. Then the unforeseen happens.

"We just felt a sudden drop," Prince says in refection, as their vehicle is swallowed by a merciless and unforgiving ditch opened up by the waters of the pouring rain. Then everything goes blank.

Prince isn't sure for how long he's been out but when he comes to, he realizes his colleagues, teammates, friends are motionless. He checks Hector for a pulse. There's none. Jno Hope is also dead.

Three years after that tragic accident, Corinthia John Hope, the mother of Norran, files a case of negligence against the Dominica Football Association (DFA). Through her lawyer, David Bruney, Corinthia John Hope, in her statement of claim, says the DFA "by its representative arranged for the said Norran Corey John Hope to be transported from La Plaine to Roseau aboard the motor vehicle of national coach Anthony Kurt Hector."

"The Defendant by its representatives failed to ensure that the said vehicle was subject to a fully comprehensive policy of insurance which was necessary for the protection and safety of the said Norran Corey John Hope during such transportation," the claim form says.

According to Corinthia's claim, the DFA created "an unsafe system of work for both Hector and Jno Hope during a time that the DFA was responsible to ensure their safety. The claim says the DFA, by allowing its selected footballer to travel under adverse weather conditions, it was in fact exposing its employee to a foreseeable risk of harm and hence was negligent.

Corinthia Jno Hope is claiming EC$12,000 for damages for funeral expenses and EC$1, 075 as damages for letters of administration/probate of Norran Corey Jno Hope's estate. Additionally, she wants damages for pain and suffering and loss of amenities, earnings and expectation of life.

In its defense, the DFA says it cannot be held responsible for an act of God. Through its lawyer Dyer & Dyer, the DFA states that the accident was due to a sink hole in the road for which there was no forewarning and that the "accident which resulted in the death of Norran Corey John Hope was due to an act of God."

The DFA further claims that it had no control over roads in Pond Casse, or in Dominica for that matter.

The DFA says Corinthia Jno Hope is not entitled to any special damages and the association had been wrongly sued and the claim should be struck off.