"For the entire day I think of news" 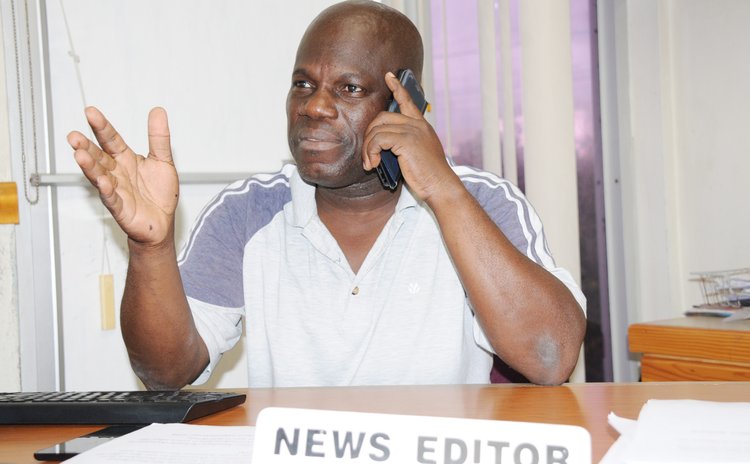 Sun's Person of the Year 2018 , Curtis Matthew at his desk

When Curtis Matthew wakes up in the morning the first thing he does is say a prayer, seeking guidance and protection, and happiness for everyone.

"I say a short pray, ask God for guidance and pray for other people. A prayer without having people in it . . . is incomplete. I always say, 'God, let people be happy,'".

It's only after this short conversation with his maker that Matthew makes his way to the place that has brought him solace and satisfaction since 1987, the year the American animated sitcom, The Simpsons, first episode aired, Klaus Barbie, the so-called Butcher of Lyon, was found guilty of crimes against humanity, and DNA evidence was used for the first to convict a criminal, and a year after the Human Genome Project was launched to understand the human DNA.

And with him always is his trusted tape recorder - like Robin was to Batman.

Matthew's attachment to his recorder is due to the fact that he has news in his DNA. He searches for every opportunity for a story and will go to any length to get it, even at the risk to his relationships. He lives for the news, he says.

"For the entire day I think of news. I think of the news every day of the week, Monday to Sunday, even on holidays," he tells The Sun.

This dedication his driven the mild-mannered Matthew and has kept him at the state-owned DBS Radio for 32 years, having had his first taste of journalism there as a volunteer, before rising through the ranks to become news editor, and even acting general manager.

His is a household name here and his three decades of relentlessly covering the news earned him the Meritorious Service Award at this year's independence celebrations "for outstanding service to the country".

"You have been exceptional," Roosevelt Skerrit, the island's prime minister, told Matthew in making the announcement. Some of his major fans and friends, like Dalia Samuel, would probably use the same words that the prime minister used.

However, he came within a few inches of failing to enjoy such highs in broadcasting and standing tall as the winner of a prestigious national award.

As a young boy growing up in Morne Jaune, Matthew wanted to be a police officer, and upon graduating from the Community High School (CHS), he sought to pursue his love for policing. But he fell short there and was forced to seek employment elsewhere.

"I came close to becoming a police officer. When I left school, I pursued that and I passed all exams and I reached Morne Bruce [police training facility] that morning to become a police officer. I came down to Roseau . . . at the back of a van we drove up to Morne Bruce, a police officer called me, asked if I was there for training, I said yes. We went into a room, some measurement was taken, and he told me I was too short. That was devastating for me. This was the worst day of my life. When I got to Morne Bruce, knowing that I was too short to make it, it was devastating."

Some of the leading names in the police force today – Supt. Richmond Valentine and Daniel Carbon, the deputy police chief - were among Matthew's group of recruits.

"Who know . . . I may well have been police chief today," he says jokingly.The force's loss became DBS' gain as Matthew, who grew up spending late nights with his father listening to cricket from Australia and England, turned to the radio station in his quest to become a sports reporter.

It was not a shoo-in, however, as DBS didn't have an opening at the time, although Tim Durand, the programme director, encouraged him to "hang around, and you might never know'.

So he volunteered his services for months, during which the then police commissioner, Desmond Blanchard, called to find out if Matthew still had in interest in joining the force. A discussion with Durand helped him decide.

"I went to Tim Durand and I told him, and he said I was a good person and 'if I were in your place I would stay around to see what happens.'"

It was not long after that he got a letter of appointment.

Matthew's early fascination with the police was grounded in the discipline instilled in him at home by a strict father, Maximea, now deceased.

"I learned so much from him while he was alive. He was a disciplinarian. We had to go to church. Even growing up as a big man, you could not be at home in Morne Jaune and not go to church. So you grow up in this background."

Matthew, who was born in Grand Fond, says he was "a very timid guy" while growing up in Morne Jaune, and never got in trouble.

"I cannot remember even getting involved in a fight with anybody," he says.

But growing up on the edge of a cricket field also assured he would become a sports lover, his enthusiasm for which got him into trouble many times with his dad.

In addition to feeding the pigs, the young Matthew also assisted on the farm, particularly on banana days.

"We would carry the bananas to Rosalie, and we had to wait until we sell it at night, get home late and get ready for school the next day. There were days we would miss school to help with the bananas. It was not very easy. The children had to assist a lot."

This was life for the close-knit family until he left for school in Roseau, where he encountered a principal in Celia Nicholas, who was as strict as his dad.

"She was the same thing as my father, very strict. Some of the same things I learned in Morne Jaune were the same . . . No wonder I wanted to be a police officer. I saw the police force as a disciplined place," Matthew says.

During his five years at the CHS, he became head boy and made the school's cricket team as a frontline batsman. He was later called to national youth trials along with players such as Joey Pierre and Roy Marshall, but again, he fell short.

"I played with these guys at trials, but because of exams I couldn't attend trials at 2 o'clock in the afternoon. So that really kept me back."

Although he says his five sisters, along with his mum, Virginia – he also has a younger brother – have spoiled him, Matthew's social life has been left tattered and frayed by his dedication to his work, his preference to cover the function rather than attend and have fun.

"You hardly find me at a function unless I'm on the job. What happens when a lady asks you to go out and you say 'no, I have to work?'"

He cites as an example, a young woman who had eyes on him – and who, undoubtedly, he was eyeing – with whom he had made plans to go out one night. But when the time came, news broke of a killing in Roseau and he chose to cover the story.

"By the time I covered the murder, it's 2:20 in the morning, the outing cannot take place again. That was it the next day. I lost the lady.

"I have covered the national queen show for the last 17 years, and you might ask, why can't someone else do it? I don't know. What happens when a lady tells you she wants to take you to the queen show with her? My social life has been impacted by covering the news. No two ways about it," he says. "No two ways about it."

There appears to be a tinge of regret in his voice, but it's difficult to tell. However, there's no doubt about his love for what he does, even if relationships become collateral damage.

And he ends the day in very much the way he begins it, with a conversation with God.

"At night when I get home, I get something to eat, say a short prayer and go to bed."