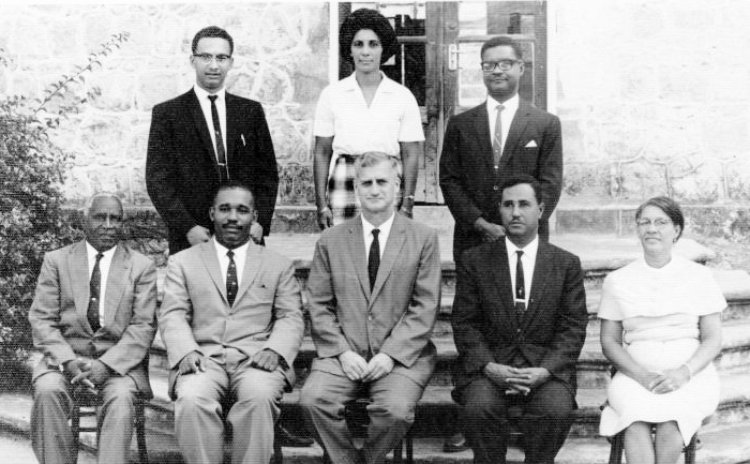 The DLP Cabinet of 1967-1970. ROP Armour standing extreme left. With the passing of NAN Ducreay earlier this year and now the demise of Armour, all members of that Cabinet have passed on

A former minister of government, Ronald O P Armour, died on Sunday 6 August. Below is an account of his life compiled by historian, Dr. Lennox Honychurch.

News has been received that former minister of government and attorney at law Ronald O. P. Armour passed away peacefully on 6 August 2017. He was a son of the late Dr. Reginald Fitzroy Armour and his wife Marjorie (nee Bryant). He qualified in law at the University of London in the UK in 1961 and gained a diploma in Economics and Social Administration from the London School of Economics in 1963. He was an active member of several student groups including the West Indies Students Union, the Afro-Caribbean Society and the Africa Society as well as attending the 8th World Festival of Youth and Students in Finland.

On his return to Dominica in 1963 he immersed himself in many aspects of Dominican life including the Dawbiney Literary Club where he made a maiden speech on Marxist economics. In 1964 he was elected to the Roseau Town Council and he joined the Dominica Labour Party. He successfully contested the general election of 7th January 1966 under the leadership of Edward Le Blanc as representative for the Roseau South Constituency.

With the constitutional changes that came into effect when Dominica became an Associated State of Britain on 1 March 1967, the size of Cabinet was increased from four to five ministers and Armour was appointed Minister of Communications and Works. He was the youngest Dominican government minister so far and at the time was seen by many as an anti-establishment radical.

When a political crisis hit the DLP in September of 1970 and three ministers of government were fired, Armour remained loyal to Edward Le Blanc. In the Cabinet reshuffle that resulted, John Royer of Vieille Case was appointed Minister of Communications and Works and Armour became Minister of Education and Health for the one month that remained before the upcoming general election. Armour was again successful in that general election of 26 October 1970 when he once again contested Roseau South as a member of the newly formed Le Blanc Labour Party with its new party symbol, the shoe.

In the new government, Le Blanc appointed Ronald Armour as Minister of Finance, Trade and Industry and Deputy Premier. On 1 January 1973, his ministry was changed to Finance and Development while maintaining the designation of Deputy Premier. But already, a quiet internal tide of opposition to Armour had developed from within the DLP led by the newly elected member for Roseau North, Patrick Roland John, Minister of Communications and Works.

Knowing that Premier Le Blanc was into his last term, but unsure of when the date of his resignation would be, John began a campaign to discredit Armour and set himself up as the heir apparent to the leadership. By 1973, Armour could not take the pressure from Patrick John and his faction any longer and he resigned from the government on 13 July 1973 during a national state of emergency while remaining a member of parliament and a member of the Le Blanc Labour Party.

When Edward Le Blanc resigned as Premier on 9 July 1974, the way was clear for Patrick John to take over as leader of the state. However, Armour was still seen by some as Le Blanc's heir for Premiership. But Patrick John ensured that this move was blocked, when, at a DLP delegates meeting at Goodwill on Sunday, 14 July 1974, held to choose a new party leader, John and his faction loaded the meeting with a mass of quickly appointed delegates and swept up the vote, over-riding Armour's mainly traditional DLP countryside power base. Patrick John became Dominica's new Premier.

In the months ahead, the relationship between John and Armour only deteriorated further. At a meeting of the House on 21 August 1974, John declared that he did not want Armour sitting on the government side and asked the Speaker to have him moved. The opposition Dominica Freedom Party did not want him on their side either and so Armour dragged his chair to the centre of the House and sat in the space between the two parties. It is one of the great 'ifs' of modern Dominica history as to how different the fate of the country would have been if Armour had become Premier.

Against all odds, Armour contested the following general election of 24 March 1975 as a member of his short-lived Progressive Labour Party but was wiped out by the new DLP candidate Eustace Hazelwood Francis, one of Patrick John's 'dynamic 21'. Ronald Armour fell from a position where he had gained handsome majorities in the previous two elections to a point where he only picked up 54 votes. His political career was over.

From then on, Armour concentrated on his private law practice, based at his office in Portsmouth and served as district magistrate. He also oversaw his landed interests on the agricultural estates of Hodges and Blenheim in the north. From the time of the Dominica Freedom Party Government in the 1980s, Ronald Armour was appointed to various boards and commissions whereby he continued his service to Dominica.

(The State funeral for Mr R.O.P Armour was held in Portsmouth on Monday)