Former Prime Minister Edison James: "In my opinion… "There will be civil unrest" 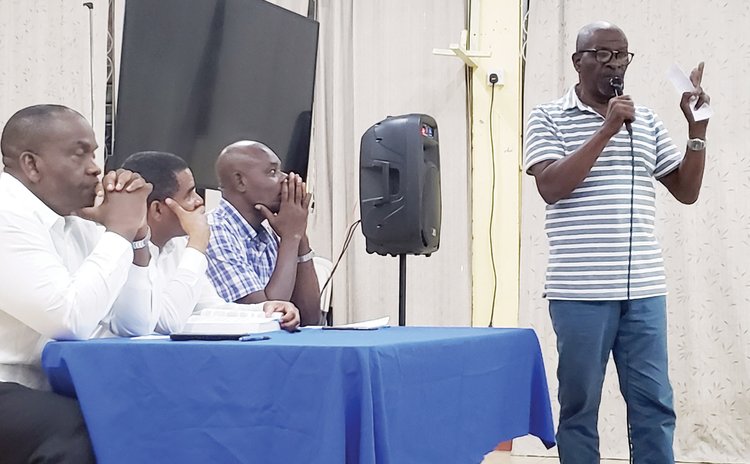 Dominica appears to be heading into trouble with her eyes wide open. She apparently will not see.

On the eve of the general election, the two sides on the electoral reform divide, the ruling Dominica Labour Party (DLP) and the opposition United Workers Party (UWP) are as far apart as they could be despite years of discussions on the subject.

And last week the UWP again forcefully warned that the upcoming election could be anything but peaceful if there is no cleansing of the voter's list and the issuance of identification cards for voting.

"It is my opinion, hear me well, it is my opinion that if there is an attempt to have an election without electoral reform, there will be civil unrest," said former Prime Minister Edison James at a public meeting called by the UWP to discuss development issues with civil society. "This is my opinion".

But the current political leader of the UWP, Lennox Linton, did not simply express an opinion as James did- apparently attempting an avoidance of a charge of incitement-Linton appeared to state a fact.

"While we wait on the report, let me add my voice in my own special way," he said. "If there is no electoral reform for the next election, there will be PLENTY civil unrest".

Meanwhile, the Government of Dominica through Attorney General Levi Peter has discounted the notion of the possibility of civil unrest if there was no electoral reform before the next general election.

Responding to a report from The Group, Peter said that the perception that Dominicans will be disappointed with the outcome of the elections if there was no electoral reform is the view "of the disgruntled."

"The Group" formed to influence the movement towards electoral reform, is made up of representatives from the Dominica Christian Council, The Dominica Business Forum Inc., The Water Front and Allied Workers Union, The Dominica Bar Association, The Dominica Association Evangelical Churches, and The Dominica Public Service Union. To date, The Group has held a number of consultations and public meetings and produced a few reports on its deliberations.

Writing in a paper dated 16th September in response to The Group's latest report, the Attorney General said the report was "a disingenuous document masquerading as an independent non-political report emanating from an independent, non-political effort to effect fair electoral reform."

Peter added: "Most of the entities and individuals listed in the 'report' as having been involved in the alleged electoral reform effort and the creation of the 'report' are either known supporters, operatives and/or sympathisers of political parties and/or grouping hostile to and/or non-sympathetic to the Dominica Labour Party and the Government of Dominica."

So, two partisan groups-the ruling Dominica Labour Party and UWP, through The Group- apparently have their own dissimilar versions of how to achieve electoral reform. To avoid the James and Linton predicted civil unrest someone needs to mediate.

Recently The Group advised Prime Minister Roosevelt Skerrit to refrain from calling the general election before it is constitutionally due, in May 2019, until a recent mission, requested by Prime Minister Skerrit, from the Organization of American States (OAS), the Commonwealth Secretariat and CARICOM, submits its report.