Four decades after Hurricane David, Dominica is not taking seriously enough the lessons from that super-storm 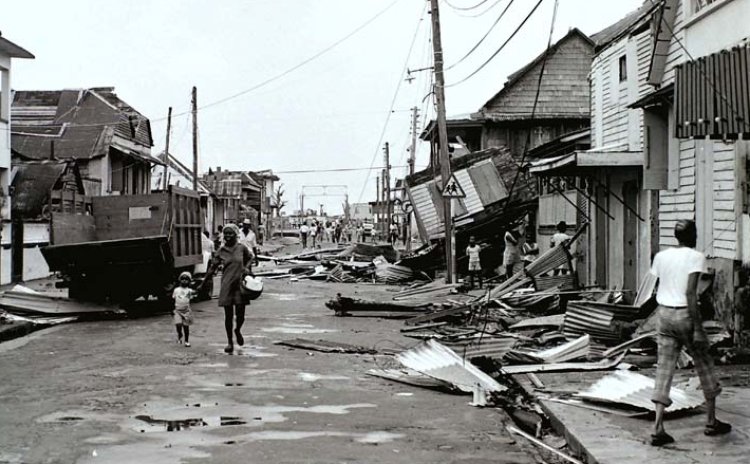 We have said this so many times over the past four decades that we sound like a stuck LP vinyl record: Dominica can learn many lessons from the numerous storms that have devastated the island over the past four decades. But we continue to display an unhealthy level of complacency catastrophe after catastrophe, from Hurricane David to Tropical Storm Erika in 2015 to Hurricane Maria in 2017.

More than 42 years after the hurricane which Dominicans still not so fondly refer to simply as "David" terrorized the country on 29 August 1979, questions remain as to whether or not Dominica has learnt any lessons from the strongest storm to hit the country in the 20th century.

We are not alone in coming to that conclusion.

"If we were to have another Hurricane David we would not have learnt our lesson," a local disaster preparedness official said to The Sun some time ago. "I don't know. Sometimes I feel we're just spinning top in mud." In reference to preparedness and early warning, the Office of Disaster Management (ODM) said in an article in the SUN, that "some advancement has been made since 1979 – there is a greater amount of regulated planning taking place, and we do build stronger and better structures, however, some challenges remain especially among the informal housing sector, a sector that does not always adhere to housing standards and building codes; reasons given for lower building standards are related to economics, high building cost, the unavailability of suitable lands for housing, however the highest contributor to our vulnerability in that sector is linked to unregulated settlements and to poverty. Other factors we have been told are associated with contractors who cheat or short change clients in order to increase their profits".

The ODM added: "As it relates to early warning systems, there are now two relatively well equipped local weather offices, with added staff at higher levels of training, two of which are at the level of the forecaster. The offices also have access to a number of weather radar systems from the region and beyond that allows for real-time analysis, modelling, tracking and early warning. The public also has access to much more information via the web, Internet, weather TV Channels, Direct TV, cable and satellite TV in 3D and HD that allows us quality footage of any event unfolding in the world. In addition, there are smartphones available that allows for up to date real-time information.

"There is absolutely no doubt that we have far better warning systems than existed in 79".

But the ODM then asked that crucial question: "have we used the lessons from these impacts to build a culture of resilience, preparedness, safety and security among ourselves and our communities? Or do we continue to find comfort in the state of complacency and unpreparedness; a culture we seem to be developing and if not careful that may well define us as a people".

In case you have forgotten or you were too young to remember, one year after the island attained political independence from Britain, David, a Category Four hurricane packing winds of 150 miles per hour and carrying millions of gallons of rain slammed into the island. David striped trees from mountains and smashed homes to smithereens. After pounding Dominica for more than six hours, 56 people were dead, more than 180 injured and 75 per cent of the population were homeless. For many months after the hurricane, hundreds lived in tents or lodged with more fortunate friends.

Most significantly, Dominica's economy was virtually swept away by the winds of David. Roads and bridges were destroyed and on Dominica's farms, almost every banana plant was broken and coconuts and other fruits littered the ground. Thankfully, many countries came to the aid of our distressed country. After two months, the Interim Government of Oliver Seraphine announced that it had received pledges of US$37 million mainly from the United States, Britain, Canada and Caribbean countries. Apart from the physical damage, one of the more lasting impacts of Hurricane David was the massive exodus, in the wake of the storm, of the country's human resources especially young, educated and trained members of the workforce. That impact is still being felt 42 years later.

The point we need to stress here is that given the severe pain that David caused and the generally high cost of natural disasters, Hurricane Maria was the latest, one would expect the government and the population generally to plan more adequately because we do not exaggerate when we say that the threat of being devastated by another major hurricane or tropical storm is as real as Dominica's green mountains.

As architect Severin McKenzie told us some time ago, he believed that Dominica needed to go beyond the "antiquated approach of having people in disaster relief committees as opposed to preventing disasters from happening."

"If you know your house is not strong enough, before a hurricane you can strengthen it. So be proactive and retrofit your house. We are not moving in this direction at all," McKenzie said.

In other words, we are not taking adequate measures to reduce the cost of disasters. Our waterways and drains are blocked, dozens of people are living in ravines that killed villagers during David and Maria and, unbelievably, roads are being built without drains, even in high rainfall areas. And listen to this: the government is currently building a large apartment complex costing millions on the bank of the Roseau River. No appropriate river wall is being constructed.

And we continue to repeat, even as the economy nose-dives like an aircraft that has lost its engines, that Dominica will be the first climate-resilient country in the world within the next decade.

Are we so blind that we cannot see?