He says Loblack is the greatest of Dominica's heroes 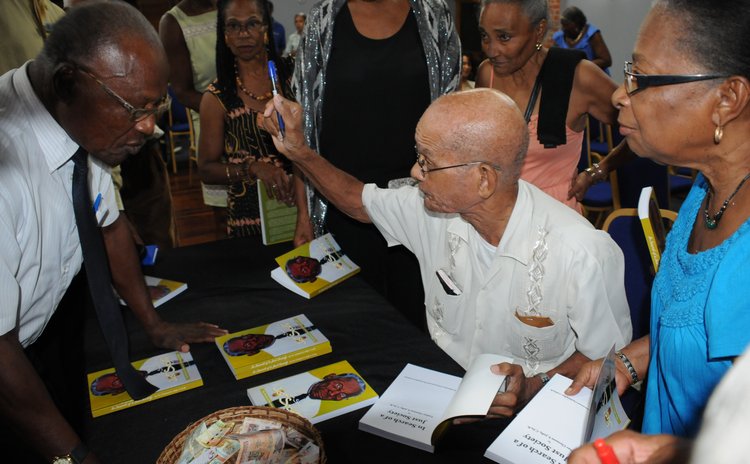 Father Clement Jolly CSsR argues, in his 20th book, that the late Emmanuel Christopher Loblack may be one of Dominica's greatest heroes who not only gave voice to the voiceless during a period when that was unthinkable, even crazy to do, but Loblack also helped form the Dominica Labour Party (DLP), a political party that, for better or for worse, has shaped the social and economic landscape of Dominica yesterday, today and forever.

"Loblack ranks head and shoulders above them all," writes Jolly. "The greatness of Emmanuel C. Loblack lay in that he resolved to change the society as it existed in Dominica, as he saw it."

In his latest book, Fr. Jolly posits that E.C. Loblack was "not merely a trade unionists or a labour leader" but a man who "discovered a new vision for life."

The book, launched last Friday evening at the Fort Young Hotel, is entitled "In Search of a Just Society: The Mission of Emmanuel Christopher Loblack."

In the 252-page book, with a cover portrait of a stern-looking Loblack with greying hair, painted by renowned Dominican artist Earl Etienne, Jolly puts Loblack's tremendous contribution to industrial relations and political development of pre-independence Dominica in the spotlight; Jolly has amplified that bright light that shone from the face of E.C. Loblack as he fought for better working conditions for the vendor, the estate labourer, the housekeeper, the carpenter. And don't ever think that Loblack was an intellectual. He was an uneducated, poor, barely literate but a proud Dominican man from Grandbay. E. C. Loblack would be 118 years old today if he was alive. He died on 3 June 1995.

And Fr. Jolly captures all of Loblack's brilliance and fortitude and vision in his search for justice, in his trademark simple language that reminds one of the prose of the world famous writer Earnest Hemingway.

For Jolly, history is everything: you cannot know your branches if you forgot your roots. And "In Search for a Just Society" Jolly puts Loblack's exploits in perspective by giving his readers a short course in Dominica's history. And being a priest Jolly's narrative contains the inevitable religious and spiritual outlook of Loblack's greatness.

So, you cannot know and correctly analyse the current Dominica Labour Party led by Roosevelt Skerrit without exploring the genesis of the DLP that Loblack formed in that small and dilapidated building that's situated next to the modern giant steel structure of the National Cooperative Credit Union on Independence Street , Roseau. Fr. Jolly says the proceeds of the book go towards a fund to renovate that building.