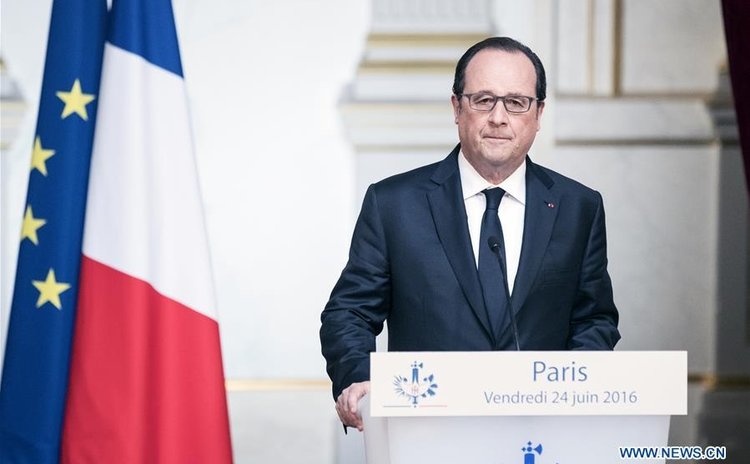 PARIS, June 24 (Xinhua) -- French President Francois Hollande on Friday said he "respects" the choice of the British after the majority of Britons voted to leave the European Union (EU) in a referendum Thursday.

During a press conference held Friday, Hollande said France would "continue to work with their neighboring country."

Hollande admitted the Brexit vote signalled difficulties for the EU, especially for the euro.

According to Hollande, the reinforcement of the eurozone and its democratic governance would be necessary.

"The European Union should be understood and controlled by its citizens," Hollande said, adding he would go to Berlin on Monday to meet German Chancellor Angela Merkel to discuss the Brexit.

"I will do everything for us to adopt profound changes rather than a retrogression," Hollande stressed.

"France has a particular responsibility, because it is in the center of Europe and France wanted and built it," Hollande said referring to his country's history with the EU.

The Leave camp won Britain's Brexit referendum, obtaining nearly 52 percent of the vote, pulling the country out of the bloc after its 43-year membership.