Free barrels, hams and turkeys not helping the private sector 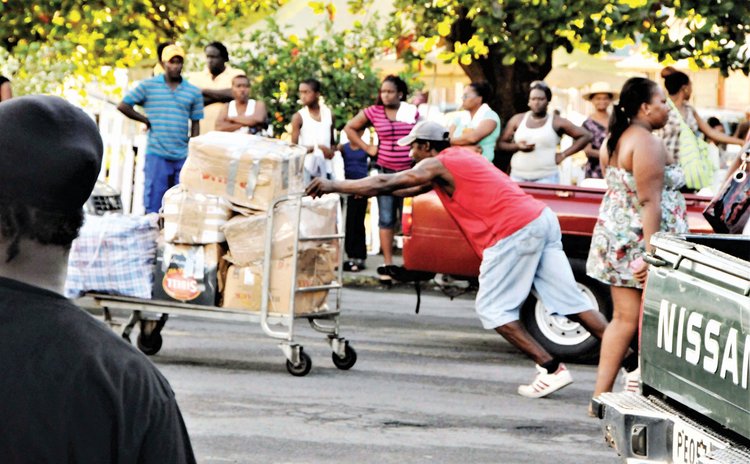 Action on the Fond Cole port before Christmas

Christmas Day 2020 was just a couple days past and many people have said, when we asked just a few days before Christmas, that because of the COVID-19 pandemic, Christmas would not have been as it used to.

For example, Malcolm Stephens & Sons said due to COVID-19, the company was forced to scale down its usual heavy orders for Christmas.

"Due to the COVID-19 pandemic, we were not able to bring in the amount of goods that we usually do during Christmas over the years. So we had to take a drastic decision and limit what we ordered for selling", Gregory Stephens said.

In addition, night-life had been reduced because hotels were closed. Furthermore, people were not buying as much as last year. It was just not business as usual.

Dexter Ducreay, the general manager of A.C. Shillingford & Co Ltd, a company that operates in the heart of the city with two 7-11 outlets on the outskirts, said Christmas 2020 would have been extremely difficult.

"For now sales are flat and we are hoping that it will pick up since generally Dominicans love shopping the last few days before Christmas," he said.

He bemoaned the decision of the government to distribute hams and turkeys for the 2020 Christmas season.

"That will definitely create a dent in our sales as per the selling of hams and turkeys but we are optimistic as a business entity given our wide range of items, we will survive," he said.

Ducreay said COVID-19 has also dealt the company a blow but having made changes to stay afloat by modernizing and changing their products, the company hoped to remain competitive.

He added that government's decision to significantly cut down on the cost of barrels from overseas was also creating a negative impact on sales.

Foued Issa, the managing director of Issa Trading said Dominicans generally shop on the last days before Christmas and for a few years now Christmas has not been what it used to be.

"Lots of freeness going around, hams and turkey and the barrel trade and while it is nice for the people receiving the benefits, but if the family would send the money and they would shop smartly and wisely, they would get more despite the concessions from government. That is not helping the private sector," Issa said.

"Business is steady but it is not easy. We don't depend on hams and turkeys but it will surely have an impact. The government could have given people money to spend in the economy that would have been better.

"COVID has hindered the economy badly and the importation of products due to COVID is also a major issue. We are aware of that and as a company we have kept our prices to our customers very manageable so that they can afford," he said.