Freedom of the Press and Dominica's General Elections: Is this dream achievable? 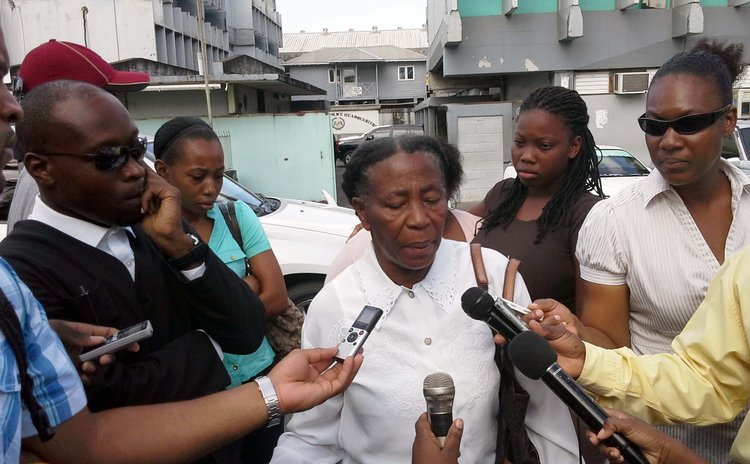 A relative of the deceased man speaks to the press

"If our elections are to be free and fair, journalists must understand that the coverage of elections is not like a regular beat. It is tracking a complex system with several moving parts and many opportunities for operatives to pervert the process in hopes of swaying the results in their favour. Disinformation poses a very real threat to the electoral process, so verification of facts is paramount to a free and fair electoral system."

"There is no way to have a functioning democracy without a thriving press. One of the great missions of the press is to hold power accountable by revealing what those in power would rather hide. Corruption depends on concealment. Accountability hinges on disclosure".

"A free press is essential for peace, justice, sustainable development and human rights. No democracy is complete without access to transparent and reliable information. It is the cornerstone for building fair and impartial institutions, holding leaders accountable and speaking truth to power. This is especially true during election seasons".

The press in Dominica is not free simply because almost every media unit here is owned and controlled by the ruling party and /or the party's supporters. That's our view and that opinion is supported by a major international institution that we will provide details on later in this editorial.

Ownership of the press by political parties is one of the most serious issues affecting the press in Dominica but instead we hear criticism such as the lack of training and professionalism and inadequate equipment, implying that press ownership does not adversely influence the effectiveness of the press.

Another issue we prefer to ignore is extremely low wages (like EC$1200 per month) which, if we are honest, will not inspire any young journalist to be professional and industrious, to challenge government officials or to conduct investigative reporting. Please, stop comparing Dominican reporters to employees of CNN. They aren't. After all, Anderson Cooper, CNN's host of Anderson Cooper 360, earns US$12 million a year, according to Yahoo! Finance.

So there are many issues affecting press freedom in Dominica which we would have discussed if we observed World Press Freedom Day in any serious way. But we didn't even if the 2019 theme was absolutely appropriate: "Journalism and Elections in Times of Disinformation."

According to the United Nations that theme was selected to help us discuss current challenges faced by media in elections, along with the media's potential in supporting peace and reconciliation processes. Please see our selection of quotes at the beginning of this editorial.

But the situation affecting press freedom in Dominica should be considered to be a very grave issue and should not be treated with such dangerous complacency. And, obviously, ignorance of the facts should not be an excuse. For instance, the Report of the Commonwealth Observer Mission for the 2014 general election clearly warned, more than four years ago, that all is not well with the media in Dominica.

The report stated: "There is incomplete information on ownership of radio stations, but it was alleged that five of the six stations have either direct affiliations with the Government through shareholding schemes, or are owned or managed by agents of the ruling political party.

"Although the Dominican Constitution guarantees press freedom, the Mission observed that the media is largely influenced by the State-run GIS. Print media is generally allowed to operate unhindered, but it is accepted among citizens that certain radio stations are aligned to certain political parties. The media does not appear to be balanced and fair in their coverage of news worthy events: certain media houses have established relationships with certain political parties and exclusively publish their content. The Christian Code of Conduct notes "the tremendous influence [media outlets] wield over the public".

Nevertheless, some defenders of the status quo will contend that the Commonwealth Mission painted an incorrect picture and that the international press freedom watchdog organisation Reporters Without Borders (RWB) in its recently published 2019 index suggested that press freedom in the Organisation of Eastern Caribbean States (OECS) was not as bad as in other democracies of the world. In RWB's index the OECS placed 50 out of 180 countries; Trinidad and Tobago 39; Jamaica 8. But note this: Cuba was placed 169 and Venezuela- 148.

In its analysis of the index, Reporters without Borders says: "Journalism is not a prestige profession in the countries that are members of the Organization of East Caribbean States. They receive little training and often abandon media work because it is so badly paid, an issue that particularly affects female journalists in the region. Many media outlets are under the direct influence of politicians, especially during elections, because officials can withdraw state advertising at any time and deprive them of income they depend on. In some of the Islands, political parties even own or have major shares in media companies, compromising journalistic independence. The authorities are also monitoring social networks more and more closely, which encourages a degree of self-censorship. In 2018, reports of editorial censorship by the general manager of the Grenada Broadcasting Network brought into question the journalistic independence enjoyed by reporters working for Grenada's largest media network."

We agree. In such circumstances then, where government or its supporters control practically all the media, where the sword of libel is an ever present threat, it is extremely difficult for journalists to heed their own canon of commitment to truth, to accuracy, to fairness, to balance and to objectivity and to strive to clearly differentiate news from party political propaganda, advertising, promotion and opinions. Self-censorship in the Dominican press, we declare, is the order of the day.