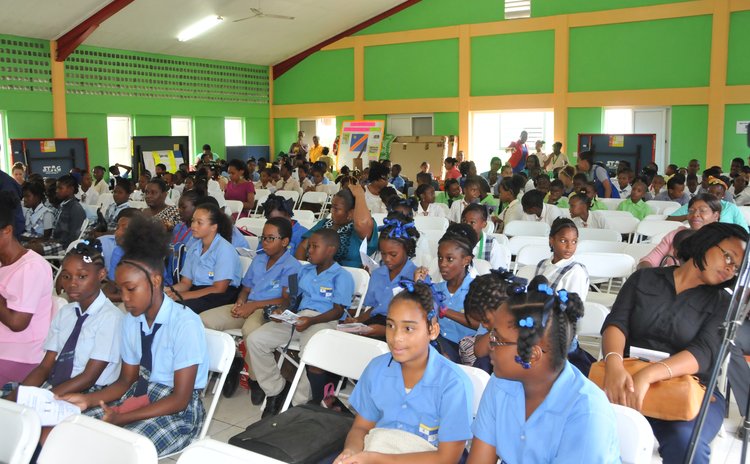 Students at the French Festival

The festival was held at the Goodwill Primary school on March 16, where 30 primary schools across the island participated.

Mickey Thomas; French teacher at the Pichelin Primary has been teaching French for nine years and told he Sun that he felt, "happy and encouraged" for being honoured.

Thomas said that his love for the French language emerged during his stay in Guadeloupe.

"It is very important to be bilingual even sometimes trilingual as it would be beneficial to communicate with others in wider society," said Thomas.

Meanwhile, Minister of Education and Human Resource Development Petter Saint - Jean stated that over the years the Ministry of Education has created ways to involve students in the celebration of the French language at the primary school French festival.

"This effort cannot go unnoticed because it speaks to the commitment that we see coming from the teachers and the various stakeholders in the education system," Saint-Jean said.
He noted that by exposing students to the French language they are given an opportunity to explore new and untapped horizons that will increase their options for learning.

In addition, Saint-Jean said that the Ministry of Education is aware of the necessities of teaching students a foreign language.

He said that French is taught from Grade K to Grade 6 and is compulsory within schools and stipulated within the national school curriculum.

Furthermore, Saint Jean said that, "In today's world we know that multilingualism has become extremely beneficial being able to communicate in another language allows us to connect with people and cultures and it opens up new avenues and valuable links in education, business and economics."