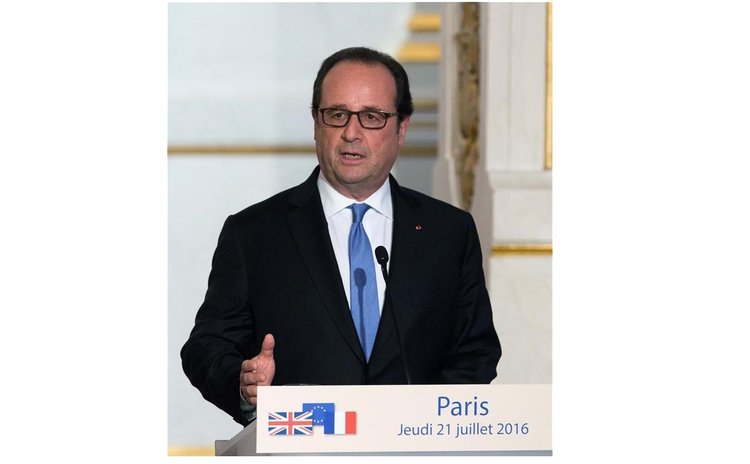 PARIS, July 26 (Xinhua) -- French President Francois Hollande on Tuesday condemned "heinous terrorist attack" targeting at a church in northern France, in which a priest was killed.

They seized five people including a priest identified as Jacques Hamal, two nuns and two worshippers. The 84-year-old priest was killed by the two hostage takers and a second one remained in critical condition.

Pierre-Henri Brandet, spokesman of the Interior Ministry told BFMTV news channel that the two men were shot dead when they came out of the church apparently to attack police units.

Hollande who rushed to the attack scene, added the two assailants claimed links with the Islamic State (IS).

"The threat is very high ... We are facing the group of Daesh, who declared war on us. We have to battle by all means," he said. Hollande also called for unity as "what do these terrorists want is to divide us."

IS claimed responsibility for the attack, the second one targeting France in several days, according to a report by Le Figaro newspaper.

Bomb officers accompanied with sniffer dogs have been deployed to dig in any eventual explosives in the church, he added.

According to local reports, one of the attackers was known to intelligence services. He was arrested in 2015 for attempts to join Syrian insurgents before being released with an electronic tag.

They added one person was arrested on charge of having connection with one of the knives attackers.

The church attack came 12 days after a 31-year-old delivery man killed 84 people by driving a heavy truck into crowd celebrating Bastille Day on July 14 in the southern French city of Nice.

Nicolas Sarkozy, ex-president and head of the conservative party "Les Republicains" called for a change in security strategy, stressing that "pretexts to incomplete action are not unacceptable."

Rushing to the attack scene shortly after the attack, the French president promised to use all the means in the war against terrorism.

Last Friday, he announced he would send artillery to Iraqi army as soon as next month to support local forces in their battle against IS.

Besides, Charles de Gaulle aircraft carrier would be sent to the region by the end of September to "... allow us to intensify strikes against terrorist groups in Syria and Iraq by using our Rafale jets," he said.

In the wake of Nice truck attack, French lawmakers approved last week to extend the period of emergency rules to late January 2017 which allow more power to police to search homes and arrest suspects without judicial warrant. It also permit them to dig freely their phones and computers.

About 10 months ahead presidential elections, Hollande suffers sliding popularity over his failure to preserve security at home.

In a recent ifop poll, 33 percent of people still trust the Socialist leader to overcome security challenge, 19 points down from the support ratings reported after last year's two deadly attacks.