From Mom to Son 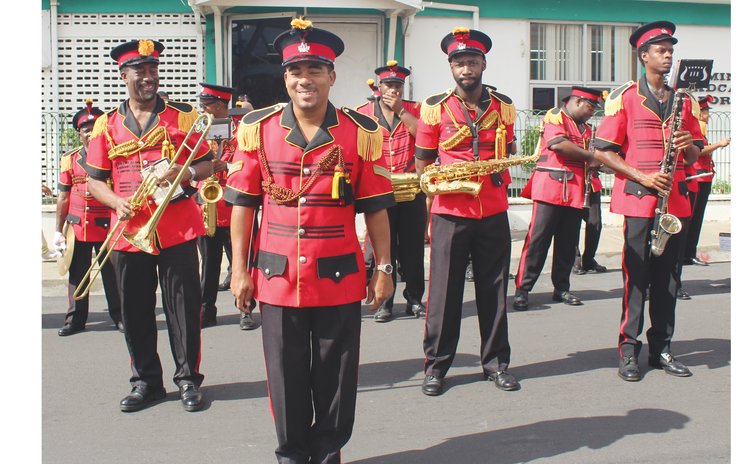 Letang, front, and other members of the Band

It was the virtual passing of the baton from one generation to the next when Peter Letang recently became the new Bandmaster of the Government Band, also known as the Music Lovers Government Band.

Who would have thought that father (Norman), mother (Valena) and son (Peter) would have all served the Band at one time or other over the last few decades?

Norman retired a few years ago as band corporal; his position was taken by his son Peter and then his wife, who played the clarinet, took over, in 2004, as Bandmaster from Hesketh Casimir.

Valena joined the band in 1985 and saw it grow from strength to strength. She said that taking over from Casimir who was at the helm for many years was not an easy task although she had the full support of all the band members.

"I was nervous and said me, Bandmaster…how was I going to control those men and women and get them disciplined, but given the 100 percent support that I got this was easy going," she said.

She continued, "My main objective was to equip the band with trained musicians so I tried to get them to grade three and then level five to move to the various levels. I am happy to where we have reached and what we have attained just before my retirement in December 2019. All in all I am satisfied; I have departed and left the band in competent and capable hands."

The band consists of 29 paid bandsmen and two recruits on training as band cadets; from January 2020 the two have been recommended to be placed on the payroll.

The band has made a name for itself already for its tradition of taking Christmas music to far-flung communities. Its other main function is providing musical accompaniment at official functions.

Centenarian Hesketh Casimir, a former Bandmaster recalls that a decision to dissolve the DDF band by the colonial authorities had far-reaching repercussions, eventually resulting in the formation of the Music Lovers Band.

In 1960, the band came under the ambit of the Government, hence its current name: The Music Lovers Government Band.

New Bandmaster, Peter Letang, has been a number of the Dominica Music Lovers Government Band now for 32 years having joined in 1988. He is an accomplished musician; he is a member of the Swinging Stars Band and has done the required course to be a Bandmaster.

"I knew he had the qualifications but all the bandsmen always call him Bandmaster and they all recommended him, so my task was easy. It was approved by Cabinet and he got his letter of appointment as Bandmaster last week making it official," she said.

For Mrs. Letang it is an "honour to hand over the baton to her son."

"He has the full support of everyone. Bing and all giving him the necessary support and Peter will lead the band with honour…I am always available to give advice and might now and again play with them with my clarinet although I will now have to re-sharpen my skills in that regard," she said.

For Peter Letang taking over as Bandmaster of this 69-year-old band is an honour.

"I accept this post with humility, I must tell you that Bingsworth (Bing) Casimir who is the Band-sergeant is the most senior person and is the obvious choice as Bandmaster and like he did in 2004 when he supported my mom for the post as Bandmaster, he has done this again. I can also tell you that everybody in the band supported me. Taking over from my mom as Bandmaster is a huge task but an honour…my Mom taught me music and my Dad so I can never be able to fulfill her role as Bandmaster," he said.

Letang said members of the Music Lovers Band have talent and he is confident that they will continue to work hard. "My vision is for the band to become full time with training and teaching of students with the aim of entertaining. Also, we have the burning issue of a house for the band; we just need that now. We are renting space at the Dominica Calypso Association's building," he said,