Jump ball No. XXIX: (Segment B): By Arlington James 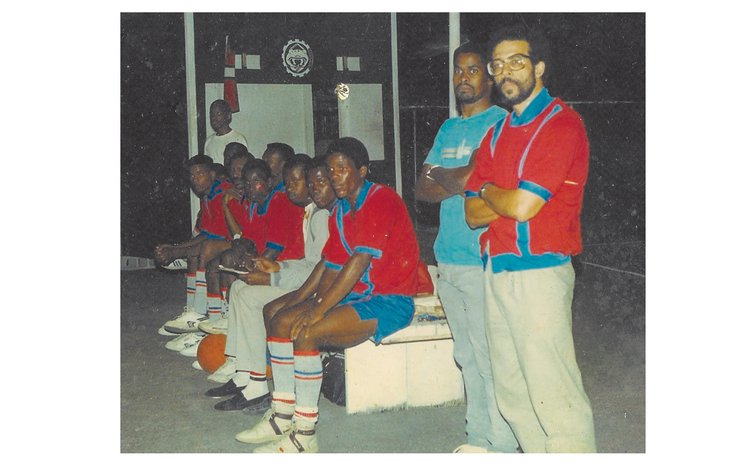 Segment A of From the Court to the Platform presented Pierre Charles and Norris Prevost. The article continues below:-

Roosevelt "Rosie" Douglas(Deceased) first became a parliamentarian when he was appointed Senator in Dominica's post-Independence government, and was later elected as Parliamentary Representative for the Paix Bouche Constituency in the 1985 General Elections. Subsequently, Rosie was elected Parliamentary Representative for the Portsmouth Constituency on a Dominica Labour Party ticket following the death of his brother, Michael. Thereafter, he led his party to victory in the 2000 General Elections. He was then appointed Dominica's 5th Prime Minister, but served for only 8 months. He died suddenly in October 2000.

Out of Parliament and unto the court, while Rosie did not play basketball in the national league or in any community league for that matter, he played a fair amount of 'ball "with the boys" at Portsmouth, on a make-shift court at Burroughs Square; that was before a proper court was constructed at Benjamin's Park. He also played recreationally at Windsor Park, Massacre, and in northern villages.

Ronald Green, who is popularly known as "Ron Green", first ran for political office when he contested – unsuccessfully – the La Plaine Constituency seat in the 1980 General Elections, as the Dominica Liberation Movement candidate.

However, fifteen years later (1995), Ron contested and won the seat as the United Workers Party candidate, and went on to serve as Parliamentary Representative for the La Plaine Constituency for three consecutive terms, i.e. from 1995 to 2009. He was appointed Minister for Education, Youth & Sports in 1995 and served as a member of the Cabinet of Ministers until 2000.

It is interesting to note that prior to his election to Parliament and serving as his Party's leader, Ron had served on the La Plaine Village Council for five consecutive 3-year terms (1979-1994).

On the basketball scoreboard, you flash the name "Ron Green" – an outstanding track & field athlete in his youth – and viewers would automatically think Basketball, particularly in Dominica's South-East.

Ron played in the Intermediate Division of the national league where he served as player-coach with South-East Suns in the 1980s. He also played in early editions of the South-East Basketball League staged at La Plaine.

Apart from playing Ron, and two other former basketball players, viz. Patrick "Jockey" Henderson and Adrian "Billy" Bannis organised the REBOC (Rural Eastern Basketball Organising Committee) League in the early- to mid-1990s; that League involved teams from Paix Bouche down to Delices. He also coached REBOC All-Stars during their engagements in Martinique and Marie Galante, and in the late 1980s Bullets (from La Plaine) in Division III of the national league.

Dr John Collin McIntyre has been a member of Dominica's Parliament since 2005 when he was first appointed Senator, and Minister for Agriculture, Fisheries & Environment in the Dominica Labour Party administration. In 2007 he was appointed Minister for Trade, Industry, Commerce & Diaspora Affairs.

"Dr. Mac", as he is affectionately known, successfully contested the Roseau Valley Constituency seat at the 2009 and 2014 General Elections, and has been serving as Parliamentary Representative for that constituency for nine years now. Currently he is the Minister for Public Works, Water Resource Management & Ports.

Jumping the ball in the centre-circle, Dr. Mac has been involved in basketball for several years now. In the 1980s he played with Fond Canie Rebels followed by Roseau Valley Prowlers, in the Intermediate Division of the national league.

Dr. Mac not only played 'ball, but he is the sponsor of the current (2016) Premier Division Basketball Champions which hails mainly from the Roseau Valley, more specifically Trafalgar and Fond Canie. That team competed in the national league as Dr. Mac Prowlers.

He was appointed a Dominica Labour Party Senator in Dominica's Parliament following the 2000 General Elections, and served as Minister for Agriculture, Planning & Environment (January – July 2000) in the Cabinet of Ministers headed by the late Roosevelt Douglas.

Shooting at the basket, Athie played with Citylites, together with Patrick Pemberton, Herbert Thomas, Clem Severin, Urban Pemberton, Severin Loblack and other players in the inaugural year of Dominica's national basketball league.

Athie helped his team capture the very first Basketball League Championship in Dominica, and that was in 1966!