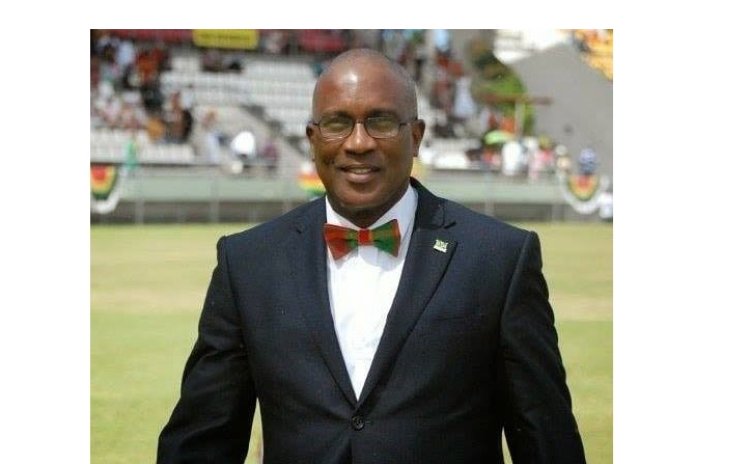 Segment C of From the Court to the Platform presented Kelver Darroux, Nicholls Esprit and Adenauer Douglas. The article continues below:-

Alvin Bernard, popularly known as "Aloe", entered Dominica's political arena when he contested the Roseau Central Constituency seat as the Dominica Labour Party Candidate in the 2014 General Elections; unfortunately, he was not successful at the polls.

On the basketball court, Aloe played Guard, then Forward, with no less than 5 teams in the senior division of the national league. He debuted with St. Mary's Academy Gales, and upon leaving school he became a founding member of Flames, with whom he played for a few years before going overseas to pursue studies. He had also served as Treasurer on the Executive of the DABA.

Upon his return to Dominica Aloe played with Clouds, followed by Hoyas, and finally Wolverines.

RONALD CHARLES, an attorney-at-law by profession and often referred to as "Bing", and "The Same Ronald Charles" in political and other circles, came close to winning the Roseau Valley Constituency seat as the United Workers Party (UWP) candidate in the 2014 General Elections.

Subsequently, he served as President of the United Workers Party from 2015 to 2018.

It is interesting to note that before entering the political arena, at the tender age of only 14 years, Bing became a member of the Trafalgar/Fond Canie Village Improvement Committee (now a full-fledged Village Council), and later assumed chairmanship of that local authority at the age of 19.

Bing, who currently shares his sports leisure time between cycling (as President of the Dominica Cycling Association) and playing basketball in the low post, has been involved in competitive basketball at national and community levels for several years now.

In the 1990s, Bing played in the Intermediate Division of the national league with a team sponsored by CATCO, and in the Trafalgar Basketball League with Bullets.

More recently, Bing played and coached in the national league with Trafalgar Rangers (e.g. in 2013), which was renamed Bullets from 2014. He was also player/coach of Bullets in the 2014/2015 Roseau Valley Basketball League.

Please note, for the records, Trafalgar's Bullets is the third team in Dominica's basketball history (at national level) to be so named.

Dr. Kenneth Darroux has been a member of Dominica's Parliament from 2009 when, as the Dominica Labour Party candidate, he was elected as Parliamentary Representative for the Petite Savanne Constituency. Currently he is the Minister for Health & Social Services in the Cabinet of Ministers, and is now serving his second term in Parliament.

In terms of his basketball affiliations, Dr. Darroux did not play in the national league or even in any community (Off-Season) league per se. However he considers himself a "big basketball fan", playing only for fun at Pichelin and has even been able to slam-dunk during recreational games on that village court.

It must be highlighted that, thanks to the efforts of Dr. Darroux, Pichelin now boasts of having the most modern basketball facility in Dominica; that facility survived the ravages of Hurricane Maria.

Interestingly, while pursuing studies in Medicine in Cuba, Kenneth and a few other Dominican medical students formed a basketball team named Absalom that played in the University League in the Province of Sancti Spiritus.

More recently he was part-sponsor of the Pichelin Sports Club Falcons for the 2017 Premier Division League.

It is interesting to note that a few years ago Dr. Darroux had sponsored a team from a neighboring Constituency. For the 2013 and 2014 basketball seasons, he sponsored Lady Pros from Grand Bay, and they played in the Women's Division under the name, Dr. Darroux's Lady Pros.