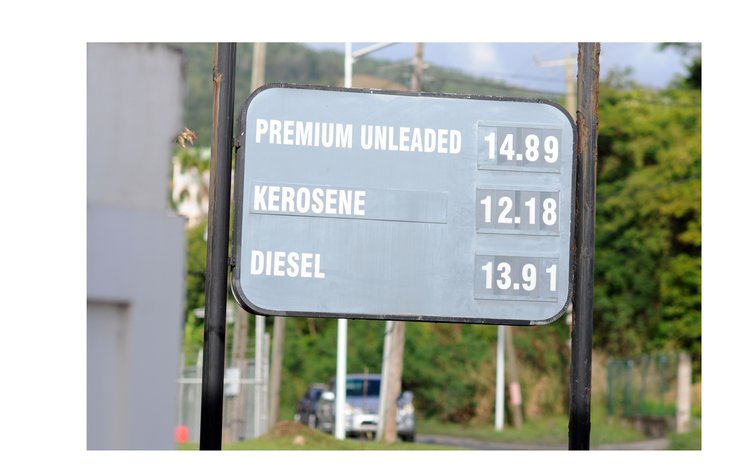 Display of new prices of petroleum products, at Canefield

Tamara Paul, a 10-year vehicle owner swears that within this decade she has never accessed public transportation until now; a decision she said she was forced to take due to the "surging" increase in fuel.

Higher prices at the pump can mean money-conscious consumers drive less, leading to a change in commuting habits. Now while this may be the case, transportation providers are now mulling over a fare increase following the hike in fuel.

According to the bus drivers, plying their usual route has now become an exercise of futility as their operations have been severely impacted and an already burdened "unsustainable" service further strained.

Director of Trade, Matthan Walter stated, these prices are not locally motivated, but based on global trends, and Dominica therefore, as a non-producer adjusted its pricing structure. "The uncertainty of the times, panic in the market, the inability of the oil producers to meet their daily projections where production is concerned coupled with the Russia Ukraine war has moved the price of those products, diesel, and gasoline, and even kerosene upwards," Walter noted.

Speaking to The Sun, a Portsmouth driver, Casimir, described the increase as a "tremendously high rate", which he says does not serve in their favor.

A Mahaut driver added, "In order for us to survive we may have to raise our prices, our fares; that's the only way because if we keep charging the same price we will actually be working for nothing."

Meanwhile, Eddie, another bus driver, said that the price hike is affecting him in "a bad way" and requested that the government intervenes to assist, and agreed that without the said intervention bus drivers will inevitably have to increase their fares.

"When you ask for a raise of fare it's putting pressure on poor people; we understand that but we too have families to feed. It's either the increase or we park our buses at our home because there's no point in working for nothing."

While many would have thought the fuel retailer the greatest beneficiary of the price increase, one petrol retailer who spoke to The Sun on the condition of anonymity insisted that the government is the only beneficiary in the price hike.

He stated that despite a short-lived protest action in 2021 and threats of further action, their quest for price regulation in the sale of petrol has failed.

In fact, he suggests, petrol retailers have a hard time meeting financial commitments, revealing that in many cases they are forced into deficit.

The retailer further proposed that the government reduce the tax burden on the petroleum industry on the island.

"If the government takes our advice, this will lead to a fair deal with the public interest in stable, reliable supplies of petroleum products at the most economic prices to consumers."